Year 10 After the Conquest (10 AC) is a year in the Westerosi calendar, the 10th after Aegon's crowning in Oldtown that maesters and educated people use as a reference to date the years.

In 10 AC the Dornish War took a darker turn when Rhaenys Targaryen and her dragon Meraxes were shot down by a scorpion at Hellholt. This would begin a period of indiscriminate revenges, and the war escalated to a series of castle burnings and targeted murders of nobles known as The Dragon's Wroth. After a failed attempt on the life of King Aegon, Visenya convinced him to establish a body of seven sworn bodyguards that would be named the Kingsguard.[1] 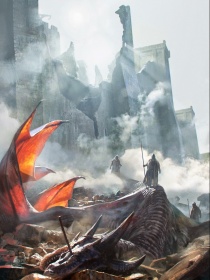 The death of Meraxes, as depicted by Chase Stone in The World of Ice & Fire