Year 111 After the Conquest (111 AC) is a year in the Westerosi calendar, the 111th after Aegon's crowning in Oldtown that maesters and educated people use as a reference to date the years.

In 111 AC, the two factions that had formed at court received the names by which they would pass to history: the greens and the blacks, as per the colors that Queen Alicent Hightower and Princess Rhaenyra Targaryen wore on the opening feast of a great tourney held in King's Landing to celebrate the fifth anniversary of King Viserys I's marriage to Alicent.[1] 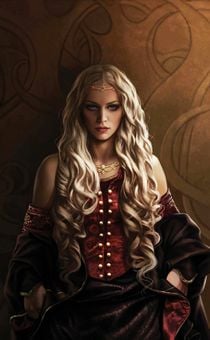 Rhaenyra Targaryen, as depicted by Magali Villeneuve for The World of Ice and Fire