The events depicted in The Hedge Knight take place in 209 AC.

Year 209 After the Conquest (209 AC) is a year in the Westerosi calendar, the 209th after Aegon's crowning in Oldtown that maesters and educated people use as a reference to date the years.

In 209 AC Prince Baelor Targaryen, the Hand of the King, died during a tourney at Ashford. Later that year the Great Spring Sickness began, which killed tens of thousands, including Baelor's father King Daeron II Targaryen, as well as Baelor's two sons and King Daeron's direct heirs, Prince Valarr and Prince Matarys Targaryen. Daeron's second son, Prince Aerys Targaryen, was crowned as King Aerys I Targaryen, being the next male in line. 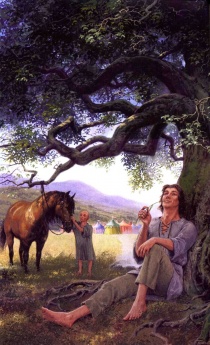 Duncan the Tall and his squire "Egg" at the Tourney of Ashford, as depicted by Ted Nasmith.