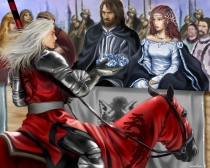 Rhaegar crowning Lyanna as the Queen of Love and Beauty, as depicted by M.Luisa Giliberti

Year 281 After the Conquest (281 AC) is a year in the Westerosi calendar, the 281st after Aegon's crowning in Oldtown that maesters and educated people use as a reference to date the years.

281 AC, which is also known as the year of the false spring, was marked by the Tourney at Harrenhal, which was attended by many highborn in the realm, including King Aerys II Targaryen and his son, Prince Rhaegar Targaryen. The year is also marked by the death of Ser Harlan Grandison, which caused an open spot on the Kingsguard, that was filled up by the admission of newly knighted Jaime Lannister. When King Aerys II named young Jaime to his Kingsguard, his Hand of the King, Tywin Lannister, quit his job out of anger and returned to Casterly Rock. 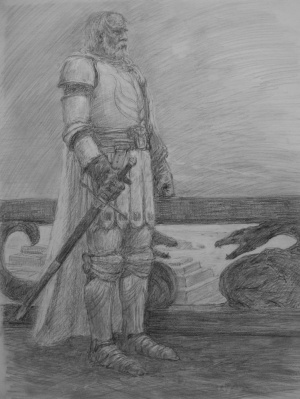 The memory came creeping upon him in the darkness, as vivid as a dream. It was the year of the false spring, and he was eighteen again, down from the Eyrie to the tourney at Harrenhal. He could see the deep green of the grass, and smell the pollen on the wind. Warm days and cool nights and the sweet taste of wine.[5]

The Prince of Dragonstone had never trusted him as he had trusted Arthur Dayne. Harrenhal had been proof of that. The year of the false spring. The memory was still bitter.