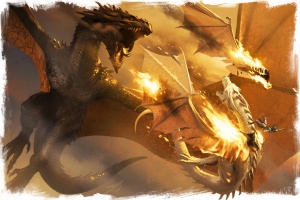 The deaths of Aegon and Quicksilver at Gods Eye, as depicted by Michael Komarck in The World of Ice & Fire

Year 43 After the Conquest (43 AC) is a year in the Westerosi calendar, the 43rd after Aegon's crowning in Oldtown that maesters and educated people use as a reference to date the years.

In 43 AC Maegor consolidated his rule by suffocating the two principal opponents to his reign. He declared the High Septon a traitor, outlawed the Faith Militant, and burned the seats of the lords that gave them support. He flew to Oldtown with the intention to burn it, but suddenly the High Septon mysteriously died and was replaced by much more biddable septon who agreed to anoint Maegor king. Afterwards, news came that his nephew Aegon Targaryen, the designated heir of Aenys, had proclaimed himself king. Both claimants met at the Battle Beneath the Gods Eye, where Maegor defeated and killed Aegon.[1]