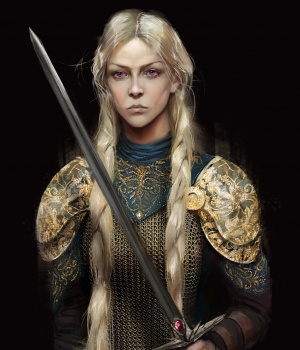 Year 44 After the Conquest (44 AC) is a year in the Westerosi calendar, the 44th after Aegon's crowning in Oldtown that maesters and educated people use as a reference to date the years.

44 AC was peaceful compared to the previous one, and with the pregnancy of Alys Harroway, it seemed as if King Maegor would finally get his much desired heir. But Alys had an abortion, and Tyanna of the Tower accused her of having laid with many men to get pregnant. After obtaining confessions under torture, Maegor executed Alys, her father the Hand, their family, and the alleged lovers. Later in the year, Visenya Targaryen died, and Alyssa Velaryon took the opportunity to flee into hiding with her children Jaehaerys and Alysanne and their dragons.[1]