A Clash of Kings-Chapter 12

Daenerys Targaryen decides to follow the red comet deep into the red waste to protect her newborn dragons. Many of her khalasar die before they find shelter in a ruined city. There, Ser Jorah Mormont tells her about his second wife, Lynesse Hightower. While her people rest, Daenerys sends her three bloodriders to scout, and Jhogo returns with three strangers from the great city of Qarth. 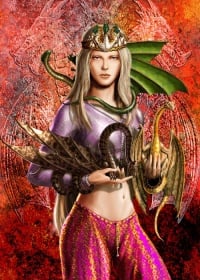 Daenerys Targaryen and her three dragons - by Amok©

Daenerys Targaryen commands her small khalasar to follow the red comet the Dothraki have named shierak qiya, the Bleeding Star. The old men mutter that it is a bad omen, but it appeared the night they cremated her husband Khal Drogo and hatched her dragons, so Daenerys considers it the herald of her coming. Her handmaid Doreah explains that only the grim and terrible red lands lie in that direction, but Daenerys really has no choice. The other khalasars hold sway to the north, the Lhazareen to the south, and Khal Pono is driving slaves west to Slaver's Bay. When Daenerys argues that Pono always spoke to her kindly, Ser Jorah Mormont reminds her that Pono was the first to leave and will kill her now. She argues that she has dragons, but Jorah explains that the hatchlings would be easy to kill, though Pono is more likely to seize them, since a living dragon is priceless. Daenerys makes it clear they are hers and will never be taken while she lives, but Jorah insists she will not live long unless she goes where no one else does. Mounted on her silver mare and garbed in her white hrakkar pelt to cover her bald head, Daenerys commands her people to follow the comet and no words are raised against it; she is the Unburnt and Mother of Dragons, so her word is their law. 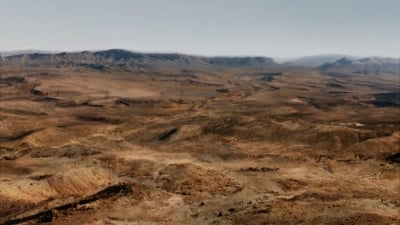 They ride by night, leaving a trail of dead horses because Pono, Jhaqo, and the others have taken the best mounts. Her people are also the weak and unwanted, so Daenerys must project confidence and strength to encourage them. Three days into the march, the weakest of her people start to die.

There is little forage and less water in the red waste. When supplies run low, they are forced to live on horseflesh and the deaths increase. Daenerys suffers with her people; she sheds much weight and her milk dries up so she cannot breastfeed her dragons. They will not eat the meat she tries to feed them until she remembers her brother Viserys saying that only men and dragons eat cooked meat. From then on, the dragons devour several times their own weight in seared meat every day and begin to prosper.

Each night, Daenerys lets one of the dragons ride on her shoulder, while Irri and Jhiqui carry the other two in a cage slung between their horses. One day, Aggo says her black dragon is Balerion reborn. Daenerys recalls that her ancestor Aegon I Targaryen's dragons were named after the gods of Old Valyria, but decides to name hers after those the gods have taken from her. She names the green-and-bronze one Rhaegal after her brother Rhaegar Targaryen, the cream-and-gold one Viserion after her brother Viserys, and the black-and-scarlet one Drogon after her husband Drogo.

Yet even as her dragons prosper, her khalasar withers. Some are forced to walk because there are no longer enough horses to go around. Doreah, who has been ill for a while, develops a fever and finally grows too weak to mount her horse. Daenerys stops the khalasar and personally cares for the girl who taught her how to seduce Khal Drogo, holding her hand until she finally dies.

As the environment continues to worsen, the Dothraki begin to fear the comet has led them to some hell, and even Daenerys begins to despair. She goes to Ser Jorah to ask if the waste has an end. He assures her it does end, though the way is harder than he dared to think. Daenerys notes that the knight is still suffering from the wound he took fighting Qotho, but he still urges their only choice is to press on.

A few days later, her outriders return with news of a city that even Ser Jorah can tell her nothing about. She sends her bloodriders Aggo, Jhogo, and Rakharo to scout the city. When they report that the city is dead, Jhiqui insists that such places are haunted by ghosts and best avoided. This does not dissuade Daenerys, and she leads her khalasar into the deserted city. Inside, Daenerys passes an empty plinth and wonders if its statue now stands in Vaes Dothrak. 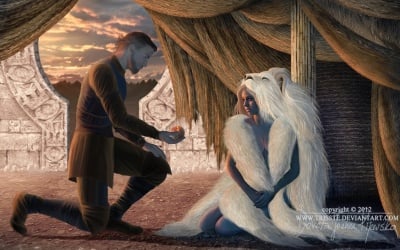 They find fruit trees and fresh water, but also bones. Irri mutters about ghosts, but Daenerys assures her dragons are more powerful, though food, water, and fodder are more important. After Daenerys settles into her tent and bathes in sand, Ser Jorah arrives to give her a peach, which she savors. She declares that the gods were good to lead them to this place, and Jorah replies that they should rest and gather their strength.

Daenerys mentions that her handmaids worry about ghosts, but the knight points out there are ghosts everywhere. Daenerys remembers those she has lost and asks the name of Ser Jorah's ghost. He names his second wife, the beautiful Lynesse Hightower. When Daenerys presses for more information, Jorah explains that his home on the remote Bear Island is cold and rustic. His first wife, a Glover, whom he loved after a fashion, died from her third miscarriage after ten years of marriage. Soon after, he fought in the Greyjoy Rebellion and earned his knighthood when he followed Thoros of Myr through the breach at Pyke. Afterward, King Robert held a tourney outside Lannisport, where Jorah met Lynesse and held Jaime Lannister to a draw in the final joust, earning the champion's laurel and naming Lynesse queen of love and beauty. That night, drunk on wine and victory, he asked Lord Leyton Hightower for his daughter's hand, and they were married there in Lannisport. However, Bear Island was a disappointment to Lynesse. Jorah went to great expense to import what she wanted, and when that failed he entered tourneys but never distinguished himself again. Each loss cost a suit of armor and a charger, and soon he was broke. Lynesse was unwilling to give up her jewels, so Jorah did shameful things for gold. When he heard Eddard Stark was coming to punish him, he fled with his wife to Lys. In half a year, their money was gone and he was forced to become a sellsword, and while he was away fighting, Lynesse moved in with the merchant prince Tregar Ormollen. When Daenerys asks, Jorah explains that he hates Lynesse almost as much as he loves her. As Jorah is leaving, Daenerys asks what Lynesse looked like, and Jorah replies that she looked a lot like her.

After he leaves, Daenerys realizes Ser Jorah loves her and wants her, not as a queen but as a woman. She tries to image herself with him, but it is no good. She also noticed his longing to return to Bear Island. He can never have her, but she hopes one day to give him back his home and his honor. That night she dreams of riding dragons with Drogo.

The next morning, she calls her bloodriders and orders them each to take three healthy horses and plenty of supplies to go scouting: Aggo to the southwest, Rakharo to the south, and Jhogo to the southeast. While they wait for the bloodriders to return to the city (which they name Vaes Tolorro) the khalasar has a chance to recover, and Daenerys tends to Ser Jorah's hip wound, which finally starts to heal.

Rakharo returns first to report the wasteland stretches south all the way to the ocean. Daenerys puts him in charge of pulling up the plaza so more grass might grow for the horses. Aggo returns next, having found only two deserted cities smaller than Vaes Tolorro. Daenerys sets him to work repairing the city gates. Jhogo is the last to return, much later, bringing three queerly garbed strangers from the great city of Qarth: the great warlock Pyat Pree, the merchant prince Xaro Xhoan Daxos of the Thirteen, and Quaithe of the Shadow. They come seeking dragons, and Daenerys declares they have found them.