A Clash of Kings-Chapter 17

Tyrion meets with Grand Maester Pycelle, Littlefinger, and Varys in turn, and gives each a secret plan. To Pycelle, he gives a secret letter for Prince Doran Martell; to Littlefinger, a plan to give Lysa Arryn her husband's killer and wed Princess Myrcella to Robert Arryn; and to Varys, a plan to give Prince Doran Martell his sister's killer and Prince Tommen as a ward.

During breakfast, Tyrion asks Grand Maester Pycelle to send his serving girl away and hands him two sealed copies of a secret letter for Prince Doran Martell. He insists Pycelle send his swiftest birds immediately; breakfast will keep, but the realm may not with Lord Renly Baratheon leading his host up the roseroad, and no one knowing when Lord Stannis Baratheon will sail from Dragonstone. Pycelle moves ponderously to obey, and Tyrion notes that his maester's chain is far more ornate than the standard. Tyrion has plenty of time to finish part of his breakfast before he sees the ravens take off. He then inspects Pycelle's well-organized potions and steals a small bottle from the high shelf. He is back eating when the maester returns to inquire about the message, but Tyrion insists it is best kept a secret. When Pycelle suggests bringing the matter to the small council, Tyrion replies that the council exists to advise King Joffrey, who is only thirteen. When ascked about the queen, Tyrion replies that Cersei carries a great weight already and Pycelle reluctantly agrees it is best not to add to her burden, given the frailty of her sex. Tyrion wonders what Eddard Stark would think of that description, but says nothing and asks to be informed secretly when a reply comes from Dorne. As he departs, Tyrion thinks to himself, One.

In the lower bailey, Tyrion finds Bronn (who is now armored as befits his role as captain of the Hand's guard) watching the men-at-arms practice. He jokingly notes that Bronn is paying no attention to a pair of pretty serving girls. Bronn replies that he can buy all the sex he wants, but one day his vigilance could save his life. He points out that the hedge knight named Ser Tallad is the best, but he falls into a rhythm that will be his death when he faces Bronn.

As they cross the bailey, Bronn informs Tyrion that thirty supplicants await him, including Lady Tanda Stokeworth's page with an invitation to supper. Lady Tanda thinks Tyrion would be the prefect consort for her soft, dimwitted daughter Lollys and is plying him with food; Tyrion tells Bronn to send his regrets. There is also a moneylender from Braavos wanting repayment of a loan; Tyrion orders him directed to Littlefinger, who will find a way to put him off. Another supplicant is a minor lordling from the Trident who wants recompense for the destruction done to his land. Seeing the value of a compliant river lord, Tyrion promises to make time for him tomorrow and orders him given good quarters, a meal, and new boots courtesy of King Joffrey. There are also many food merchants who want protection from the hungry mobs who recently roasted a baker in his own oven for overcharging. Tyrion suggests gold cloaks, but Bronn notes there were gold cloaks in the mob, and the merchants demand to see the king. Tyrion calls them fools since Joffrey would send them off with whips and spears. Bronn also reports that Ser Alliser Thorne of the Night's Watch has arrived with a rotten hand. Tyrion recalls his distaste for the man, and orders him given a dirty cell and left waiting.

After Bronn departs to carry out his orders, Tyrion encounters Cersei and her retinue by the main gate. When he asks where she is going, Cersei claims she is going to inspect the defenses in light of Renly marching from Highgarden. She believes he could arrive by the full moon, but Tyrion assures her that Renly is traveling too slowly and stopping to feast and hold court at a different castle each night. Tyrion is dubious that Renly actually has the rumored 100,000 men, but Cersei snaps that he has all the power of Storm's End and Highgarden; only House Redwyne has held back, and that is thanks to her taking the twins Horas and Hobber captive. Tyrion retorts that it is a shame she let Ser Loras Tyrell slip away, and points out Renly has Robb Stark at Riverrun and Tywin Lannister at Harrenhal to concern him. He adds that he would do the same as Renly: progress slowly, flaunt his power, watch, and wait. If Robb defeats Tywin, the south will fall into Renly's hands like a windfall, and if Tywin defeats Robb, Renly can attack the weakened Lannister host. Cersei demands Tyrion make their father bring his army to King's Landing, but Tyrion points out he has never been able to make Lord Tywin do anything. Ignoring this answer, she asks what he is doing to free Jaime, who is worth a hundred of Tyrion. Tyrion quips that they do not have a hundred of him to trade to Catelyn Stark. Angered, Cersei declares him worse than useless and leaves.

In truth, Tyrion fears Stannis twice as much as Renly; Renly is beloved but inexperienced in war, while Stannis is cold, hard, and inexorable. The spies sent to Dragonstone are ominously silent, though Lysene war galleys have been spotted and Varys reports sellsail captains taking service with Dragonstone. If Stannis and Renly attack together by sea and land there will be no chance for Joffrey, or himself.

Podrick Payne meets him at the door of his solar and shyly informs him that Petyr Baelish is inside. He finds Littlefinger seated by the window, watching Joffrey kill hares with his new crossbow in the yard below. Observing Joffrey's poor aim, Littlefinger quips that the hares are winning and advises Pod to invest in pots since the castle will soon be overrun with hares and they will be eating potted hare for every meal. Tyrion dismisses Pod and offers Littlefinger refreshment. Littlefinger politely declines, noting that he has heard to drink with Tyrion is to risk being sent to the Wall. 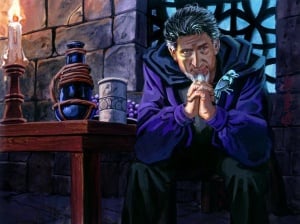 Tyrion compliments Littlefinger on his clothing and notes his Valyrian steel dagger with the dragonbone hilt. There is mischief in Littlefinger's eyes when he responds that is a trifle plain and offers it to Tyrion as a gift. Tyrion refuses, infuriated that Littlefinger knows why he mentioned the dagger and is mocking him because he thinks Tyrion cannot touch him. Tyrion reflects that his brother Jaime is famous for his gilded steel armor, but if ever a man truly armored himself in gold it is Littlefinger. Ten years ago, Jon Arryn gave him a minor position in customs, where he soon tripled the revenue. Within three years he was master of coin, and now the crown's revenues are ten times what they were. The crown's debts have grown vast, too, but Littlefinger is a master juggler and borrows so he can put the gold to work. He invests in wagons, shops, ships, houses, agribusiness, textiles, and moneylending, and the gold dragons breed and multiply. At the same time, Littlefinger moved his own men into place:, the King's Counter, the King's Scales, all four Keepers of the Keys, and the officers managing the three mints are his, as well nine of every ten among as the harbormasters, tax farmers, customs agents, wool factors, toll collectors, pursers, and wine factors. All of them are mostly men of middling birth, lesser lordlings, or even foreigners, but far more capable than the highborns they replaced. No one questioned the appointments because Littlefinger is perceived as harmless without soldiers, holdings, or marriage prospects, yet Tyrion is unsure if he can touch him.

Tyrion asks how close Littlefinger was with the Tully children during his fostering at Riverrun. Littlefinger boasts that he took both girl's maidenheads, which Tyrion considers a very smooth lie. Tyrion explains that Catelyn and Lysa would refuse any offer he might make, but they might trust Littlefinger. He adds that he hopes to sway the more tractable Lysa by offering her Jon Arryn's true killer. Intrigued, Littlefinger asks who, but Tyrion only says that Lysa would have to understand he only gives gifts to his friends, meaning she must first ally with the Lannisters. Littlefinger points out that Lysa has her own woes, such as the Vale mountain clans, who are now more aggressive and better armed thanks to Tyrion. Tyrion promises to use his influence to call off the clansmen if Lysa declares for Joffrey. Littlefinger insists Lysa will never make war on the Starks or Tullys, but Tyrion assures him Lysa's power would only be used to oppose Renly or Stannis. In return, Tyrion will give her justice, peace, name her son Warden of the East, and wed his niece Princess Myrcella to little Lord Robert Arryn.

Littlefinger asks what Cersei thinks of the ploy, and laughs when Tyrion only shrugs. Then, Littlefinger asks what his reward will be, and Tyrion promises him Harrenhal and supremacy over the riverlands as their liege lord. Littlefinger's reaction amuses Tyrion; by birth he holds only a few stoney acres on the Fingers, but Harrenhal is one of the realm's richest domains. Littlefinger is suspicious, especially considering that Janos Slynt also received Harrenhal for his good service, but Tyrion assures him that he is more valuable than Slynt. Appeased, Littlefinger notes that he will likely have to bed Lysa again to get her consent and asks for a fortnight to prepare. As Littlefinger departs, Tyrion thinks to himself, Two. 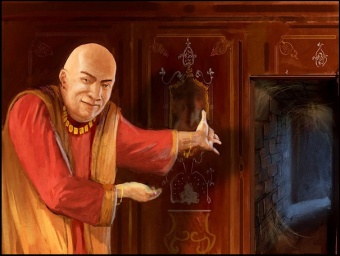 Next, Tyrion heads to his bedchamber to await Varys. An hour later, Galt announces the eunuch's arrival, much sooner than Tyrion expected. Varys quips that Tyrion was cruel to taunt Pycelle with a secret, but Tyrion accuses Varys of the same thing and offers to tell him. Varys suggests his little birds may have already told him: Tyrion hopes to dissuade Dorne from joining another faction, even though Prince Doran's hatred for House Lannister is well known. Tyrion points out that much is obvious.

Varys notes that Prince Doran is a sentimental man who still mourns his murdered sister Elia. Tyrion reveals he has offered Doran a council seat and his sister's killer. Varys points out that Ser Gregor Clegane (who is known to have murdered Elia) is a Lannister bannerman, but Tyrion argues that Lord Tywin will agree 50,000 Dornishmen are worth one rabid dog. When Varys wonders aloud what might happen if Doran demands the blood of the lord who gave the command as well, Tyrion blames Robert Baratheon since it was his rebellion. Varys points out Robert was not at King's Landing, but Tyrion replies that neither was Doran Martell.

Varys notes that Doran will want a token of good faith as well, and asks who Tyrion will offer. Tyrion turns the question back on Varys, who declares it must be Tommen since Tyrion cannot offer Myrcella to Doran Martell and Lysa Arryn both. Varys' uncanny knowledge leads Tyrion to quip that he cheats at guessing games. Varys calls Tommen a good boy, and Tyrion comments that he might even grow into a good man if they get him away from Cersei and Joffrey soon enough. Varys acts suspicious that Tyrion might mean to make Tommen king, but Tyrion insists Joffrey is king. Varys points out there is a flaw in the scheme named Cersei, who will never consent to part with both Tommen and Myrcella. Tyrion says what Cersei does not know will not hurt him. When Varys asks what will happen if she does learn of it, Tyrion declares that he would know the man who told her to be his certain enemy. When Varys giggles at that, Tyrion thinks to himself, Three.