A Clash of Kings-Chapter 2

Sansa Stark attends the tourney on King Joffrey's name day. After several poor contests, Joffrey becomes enraged when Ser Dontos Hollard arrives half naked and too drunk to compete. Sansa manages to convince Joffrey to make Dontos his new fool instead of executing him. Afterward, while Prince Tommen is riding against a quintain, Tyrion Lannister arrives to assume his position as acting Hand of the King. 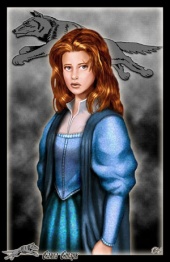 Sansa is watching the long tail of the red comet from her tower window when Ser Arys Oakheart arrives to escort her to the tourney on King Joffrey's name day. She asks him what it means. Ser Arys declares that it means glory to her betrothed, King Joffrey; the gods have raised it as a banner in his honor, and the smallfolk have named it “King Joffrey’s Comet”. Sansa is not so sure and replies that she has heard the servants call it the “Dragon’s Tail.” Ser Arys replies that Joffrey sits on Aegon the Dragon’s throne and crimson is the color of House Lannister, so it must mean he will triumph over his enemies. Sansa wonders apprehensively if this is true, since her mother and brother are among Joffrey’s enemies. Yet Joffrey is a Baratheon as much as a Lannister, so his comet should be gold.

Ser Arys compliments Sansa on her gown, whose long sleeves hide the bruises given to her by Ser Boros Blount at Joffrey’s command when he learned that her brother Robb had been proclaimed King in the North. Of all the Kingsguard, Ser Arys is always courteous to Sansa, and is her preferred escort since he is the only one who objects to hitting her and never hits hard. The others all obey without question, except Sandor Clegane, but Joffrey never commands the Hound to hit her.

As they walk, Sansa asks who will win the tourney. Ser Arys states he will, though there will be only 40 contestants, and there is small honor in unhorsing green boys. Sansa muses that this will be very different from the magnificent Hand's tourney. With King Robert dead and three kings vying for power it is not surprising that Joffrey’s tourney must be held within the Red Keep. Sansa asks if Queen Cersei will attend, but learns that the queen has urgent business with the small council. Ser Arys also mentions that Cersei is furious that Tywin Lannister will not bring his army to the city as commanded.

The pitiful crowd in the small outer bailey fills only half the seats. Most of the spectators are gold cloaks or wear the crimson of House Lannister. Only a few are nobility: grey-faced Lord Gyles Rosby, Lady Tanda Stokeworth with her daughters Falyse and Lollys, the exiled prince Jalabhar Xho, and Lady Ermesande Hayford, who is only a baby.

The Hound announces Sansa’s arrival at the royal box. Princess Myrcella gives a shy nod, but Prince Tommen excitedly tells her that he is to ride in the tourney. Joffrey quickly interjects that Tommen will be riding against a straw quintain. After Ser Arys excuses himself, Joffrey studies Sansa and declares he is pleased she wore the stones he gave her. Sansa is relieved that Joffrey has chosen to play the gallant today. 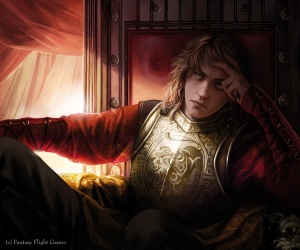 Once Sansa is seated, Joffrey informs her that the Beggar King Viserys Targaryen is dead. Joffrey is amused by the irony of a dragon king being killed with a molten gold crown. He suggests that perhaps he will feed Sansa’s brother Robb to wolves and boasts that he intends to challenge Robb to single combat. Sansa states that she would like to see that. Joffrey is suspicious of her meaning, so Sansa distracts him by asking if he will compete today. Joffrey responds that his mother claims it would not be fitting for him to compete in his own tourney, otherwise he would be champion. When asked to concur, the Hound says, “Against this lot? Why not?” When Sansa asks the Hound if he will joust, the scarred man replies that it would not be worth the bother, since this is a tourney of gnats. Joffrey suggests he should make the Hound fight the champion to the death, but the Hound replies that Joffrey would only be one knight the poorer (and the Hound is not a knight).

When the trumpets sound, Joffrey takes Sansa’s hand, which repulses her, but she forces herself to be still.

In the first joust, Ser Meryn Trant of the Kingsguard defeats Ser Hobber Redwyne on the second pass. The Redwyne twins are hostages like Sansa, and she doubts they entered the tourney voluntarily. Joffrey is disappointed by the poor show. Next, Ser Balon Swann faces the new-made squire Morros Slynt, who is having difficulty with his lance. The sight of Janos Slynt’s heir takes Sansa back to the day her father was beheaded; it was Janos Slynt who threw her father down and held him while Ser Ilyn Payne swung the sword. Her prayer for Morros to embarrass himself is answered when the former commoner is violently unhorsed. Joffrey hoots in derision, telling Tommen that they picked the wrong foe for him, Morros jousts worse than a quintain. Then it is Ser Horas Redwyne’s turn. He fares better than his twin, unhorsing an old knight bedecked with silver griffins who makes a poor contest. Disgusted, Joffrey declares this a feeble show. He is getting bored and his mood is darkening, which worries Sansa. 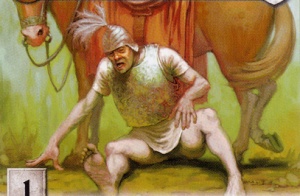 Next, Ser Dontos Hollard is called to face the freerider Lothor Brune. Brune takes his place, but Ser Dontos arrives drunk and half naked, struggling to catch and mount his horse. The audience all laugh at the drunken knight’s antics except for Joffrey. Eventually, Dontos gives up trying to mount, sits down in the dirt, forfeits the match, and asks for more wine. Joffrey stands and shouts, “A cask from the cellars! I’ll see him drowned in it.”

Without thinking, Sansa protests and is immediately shocked that she dared, given Joffrey’s mood. He turns on her, furious at being gainsaid, and Sansa struggles to make up a story that it is a curse to kill a man on one’s name day. Joffrey does not believe her, but the Hound comes to her rescue by agree that, “What a man sows on his name day, he reaps throughout the year.” Joffrey reluctantly agree to have the fool killed on the morrow. Sansa seizes the opportunity to suggest that Joffrey make Dontos wear motley and clown for him as a fool instead of executing him; he does not deserve the mercy of a quick death. Joffrey likes this idea and agrees. Ser Dontos thanks both Joffrey and Sansa.

Once Ser Dontos has been led away, the master of revels inquires whether he should summon a new opponent for Lothor Brune or proceed with the next tilt. Instead, Joffrey calls off the tourney in disgust, saying he would have them all put to death if it weren't his name day. Tommen vehemently protests that he was supposed to ride against the quintain. An argument among the royal siblings ensues. When Myrcella finally points out that their mother agreed, Joffrey mocks her for being childish, but Myrcella points out that they ’’are’’ children. The Hound, laughing, tells Joffrey that she has a point. Joffrey sullenly agrees.

Tommen’s opponent is a child-sized quintain wearing a helmet with antlers. Tommen hits it solidly, but it spins around to strike Tommen on the back of the head, unhorsing him. This incites a gale of laughter from the crowd, most of all from King Joffrey. Princess Myrcella rushes out to help her brother to his feet. Sansa, with queer courage, suggests that Joffrey should accompany her to help and tell Tommen he rode well. Joffrey angrily refuses, stating that getting unhorsed is not riding well. However, Tommen shows courage when he prepares to try again. Sansa finds herself wishing that Tommen was the eldest child; she wouldn’t mind marrying him.

Just then, the portcullis rises and the gates of the Red Keep open. A column of dusty horsemen enter under the golden lion banner of House Lannister. Some of the horsemen wear the armor of Lannister men-at-arms but the majority are freeriders, sellswords, and monstrous savages. In their midst rides Tyrion Lannister, the ugliest man Sansa has ever set eyes upon. Tommen and Myrcella rush to greet their uncle and Sansa is stunned to see that Tommen and Tyrion are the same height.

After greeting his niece and nephew, the dwarf waddles over to Joffrey, shadowed by a black-haired sellsword and a one-eyed savage. When Tyrion greets him, Joffrey expresses surprise at Tyrion’s arrival and the Hound comments that they heard Tyrion was dead. Myrcella expresses happiness that he is alive. Tyrion thanks her and then gives his condolences to Joffrey and Sansa for the loss of their fathers. Sansa is speechless, wondering if Tyrion is mocking her. Joffrey is momentarily confused until Tyrion reminds him that his own father, King Robert, has also recently died. Joffrey responds “Oh, him. Yes, it was very sad, a boar killed him.” Tyrion asks him if that is what ‘they’ say. Sansa, armoring herself in courtesy, apologizes to Tyrion for his abduction by her mother. Tyrion thanks Sansa for the sentiment, telling her that many people are sorry, and some will be even sorrier. 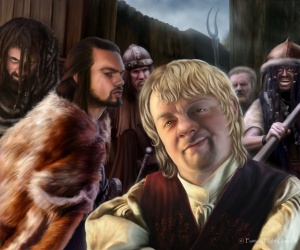 Then, Tyrion asks Joffrey where he might find Queen Cersei. Joffrey answers that she is with the small council; Jaime Lannister keeps losing battles and was captured, Riverrun was lost, and Robb is calling himself king. Tyrion comments that all sorts of people are calling themselves kings these days. Suspicious of the comment, Joffrey tells Tyrion stiffly that he is happy he is alive, and asks about a gift for his name day. Tyrion responds that he has brought his wits, and Joffrey replies he would prefer Robb’s head. Before Joffrey departs with Myrcella and Tommen, the Hound tells Tyrion to guard his tongue. Sansa is left alone with Tyrion and his monsters.

Unable to think of anything else to say, Sansa comments on Tyrion's injured arm. Tyrion tells her that a northman hit him with a morning star, but he escaped by falling off his horse. Tyrion asks if it is mourning for her father that makes Sansa so sad. Sansa reflexively insists that her father, mother, and brother are traitors and that she is loyal to her beloved Joffrey. Tyrion is unconvinced and responds by comparing her to a deer surrounded by wolves. Sansa, without thinking, whispers “Lions.” The dwarf gently takes her hand and assures her that he is only a little lion and means her no harm, then departs.

Sansa notes that Tyrion speaks to her more gently than Joffrey, but then she remembers that Queen Cersei once spoke gently as well. She reminds herself that Tyrion is still a Lannister and that she must never trust a Lannister again.