A Clash of Kings-Chapter 51 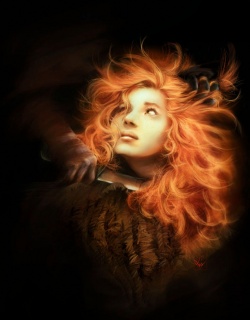 As Qhorin Halfhand’s party moves through the Skirling Pass, they note watchers high up in the pass. Qhorin sends Stonesnake and Jon to dispatch the watchers, and they are warned not to let them sound a horn. Stonesnake teaches Jon how to climb a sheer cliff face, and they eventually reach the top above the wildlings. There are three, and after killing two, the third turns out to be a woman, Ygritte. She yields to them, and Jon takes her captive, despite Stonesnake’s warning that she should be killed. When she learns that Jon is a bastard son of a Stark lord, she tells him the wildling story of Bael the Bard. Supposedly, before he joined the free folk, he was a raider, or, according to Stonesnake, a murderer and robber.

Lord Brandon Stark wanted Bael’s head, but was never successful in capturing the bandit. To teach the lord a lesson, Bael slipped into Winterfell calling himself Bard Sygerrik, which means ‘deceiver’ in the old tongue of the First Men, which the giants still speak. In return for his performance, he requested the fairest flower in Winterfell, and the lord gave him the rare winter rose. In the morning, the singer was gone along with Lord Brandon’s daughter.

A year later, the lord’s daughter was found in her bedchamber with a young baby. Bael had hidden her in the crypts of Winterfell. Thirty years later when Bael was King-Beyond-the-Wall and led the wildlings south, it was his son, the new Stark lord, who slew Bael, since the bard would not harm his son. Upon returning home, the young lord’s mother killed herself when she found out Bael was dead. The young lord was said to have eventually been killed by one of his bannermen. Jon does not believe the story, which claims that the blood of the Starks and the wildlings is the same.

When Qhorin and the others arrive, Ygritte recognizes the Halfhand and confirms that the wildlings would kill him if he yielded. Qhorin’s men state that she should be killed, and Qhorin leaves Jon alone with Ygritte to carry out the task. Ygritte tells Jon that Mance Rayder would accept him if he ran off with her. Jon, about to behead her, finally stops himself and tells her to run off.