A Clash of Kings-Chapter 55

Catelyn hears the celebration going on in Riverrun, but she sits alone with Brienne and desolate over the loss of her two young sons. The raven arrived that morning, and Catelyn is beside herself with grief, despondent at the thought nearly all her children are dead or lost to her. She tells Brienne that she sent the Kingslayer a bottle of wine to loosen his tongue. She means to question him, and is perhaps contemplating having the man killed since she has so little to live for anymore.

At midnight, Catelyn goes to interrogate Jaime, and asks Brienne to wait outside. Jaime mocks her at first, but eventually agrees to answer her questions if she agrees to answer his. Jaime admits to being the father to all of Cersei’s children, and to throwing Bran out the tower window. However, Jaime denies sending the assassin after Bran, saying, "if I wanted your Bran dead I would have slain him myself." Catelyn questions him about the dagger that Littlefinger claimed Tyrion had won from him. Jaime backs what Tyrion told her in the Mountains of the Moon, that he always bets on his brother and lost at that tourney. Jaime admits that King Robert mocked him with the dagger at the feast the night of the tourney, and Catelyn is dismayed that Littlefinger, who was like a brother to her once, would deceive her the way he has. 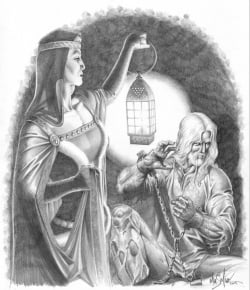 Catelyn then reveals that Robb has recently taken the Crag from the Westerlings, and marched ever closer to Casterly Rock. Jaime then steers the conversation to what really happened to Brandon Stark and Lord Rickard at the hands of the Mad King Aerys, perhaps to absolve himself of having slain the king. Brandon was on his way to Riverrun when he learned of Lyanna's disappearance, and instead went to King's Landing with a handful of friends, all sons of prominent lords, and upon entering the Red Keep, Brandon shouted for Rhaegar to "come out and die".

Rhaegar was not there to answer the challenge, and Aerys had Brandon and his men arrested for conspiring to murder his heir. Aerys demanded the fathers of the men come to King’s Landing to answer the charges against their sons; when they came, both fathers and sons were murdered at the command of King Aerys, with Brandon dying of strangulation trying to reach his father who was being burnt alive by Aerys' pyromancers. Jaime was a young member of the Kingsguard when he saw all this, and it was Ser Gerold Hightower who told him, "You swore a vow to guard the king, not to judge him", whom everyone consider a better man than him.

Jaime, now fully drunk, angrily rants that he is reviled for what he considers his finest act and begins to mock Ned Stark’s honor, stating that unlike Ned, a man who fathered a bastard, he has never been unfaithful and that Ned had no right to judge him, the man who avenged his father and brother, but Catelyn has heard enough, and calls for Brienne’s sword.