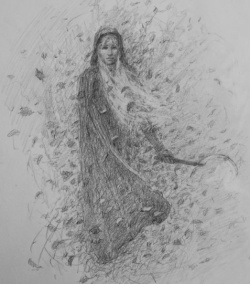 A white haired woman with a bronze sickle - by Marc Fishman ©

Bran, Hodor, Jojen, and Meera are still dwelling in the cave of the children of the Forest and exploring its chambers. Bran uses his ability as a warg and skinchanger to enter Summer and Hodor. They begin to name some of the "children" as their own names are unpronounceable by the human tongue. Bran names one of the females Leaf, as she is always adorned with leaves. She is one of the few children who can speak the Common Tongue. Others are called Ash, Scales, Black Knife, Snowylocks, and Coals.

Jojen is growing extremely sad and solemn, and still has fits of shaking. His sister Meera does her best to keep up the spirits of both her brother and Bran.

The children feed Bran a bowl of weirwood paste to awaken his green seeing gifts. Bran sees his father, Eddard, through Winterfell's heart tree, and learns that he can view the past, present and future through the weirwoods. The last greenseer tells Bran that he is haunted by his own ghosts, a brother that he loved, a brother that he hated, and a woman that he desired,[1] but knows from experience that you cannot change the past. When he gets tired, he sends Bran away. Hodor carries Bran to his bed.

In his sleep, Bran sees the following visions through Winterfell's heart tree: