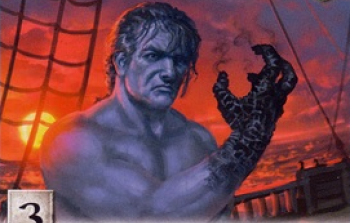 Moqorro apparently uses magic on the lord captain; when Victarion emerges from his cabin, his hand is charred and blackened. © FFG

Victarion Greyjoy is anchored near the Isle of Cedars, right outside Slaver's Bay, to find Daenerys Targaryen. He was sent by his brother King Euron Greyjoy to command the Iron Fleet and bring Dany to him, but Victarion means to take her to wife himself. Victarion's shield hand was hurt fighting Talbert Serry in the Battle of the Shield Islands, and the wound has festered. Maester Kerwin has had little success treating the wound. Victarion learned that the strong Volantene fleet is on their way to Meereen, too, while his own fleet was scattered on their way and only half have come back together. The 54th ship to arrive, the Grief, has happened upon the red priest Moqorro, who was swept overboard the Selaesori Qhoran when Tyrion traveled her to Meereen. He claims to have seen in the flames that Victarion would die unless the priest helped him. Moqorro succeeds in healing him, and Victarion has the maester killed and makes for Meereen.