Victarion Greyjoy continues on his way to Meereen. Despite his crew's unease at Moqorro's continued presence, Victarion insists that the Red God will help them on their journey. Though his arm and hand are now burned, they are stronger than ever. He says, “Two gods are with me now...No foe can stand before two gods.” 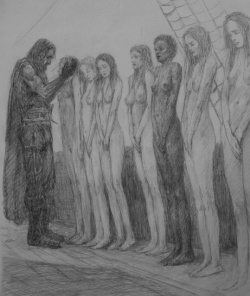 The Sacrificial Offering
by Marc Fishman

The Iron Fleet captures a number of trading ships: Ghiscari Dawn, Dove, two unnamed ships that he renames as Ghost and Shade, an unnamed fat galleas, an unnamed trading galley, an unnamed fishing ketch, and a slaver galley named the Willing Maiden. Moqorro's prophecies are instrumental in the capture of these fleets. As a show of his appreciation, Victarion burns seven Lyseni bed slaves as a tribute to both the Drowned God and R'hllor. After this sacrifice, a favourable wind rises for the Iron Fleet, which now numbers 60 ships with the new additions.

That night, Victarion allows Moqorro to inspect the Dragon Horn given to him by his brother Euron. Moqorro reads the Valyrian glyphs displayed on the horn to Victarion, telling him that the horn's name is written as "I am Dragonbinder." Moqorro goes on to explain that no mortal man can blow the horn and live. However, he states that "Who blows the hellhorn matters not. The dragons will come to the horn’s master. You must claim the horn. With blood.” 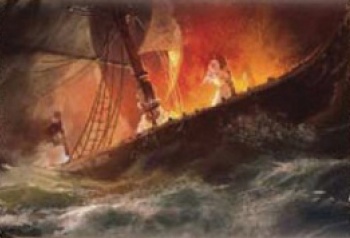