Arianne is imprisoned atop the Spear Tower, contemplating her failed scheme. She never expected someone to inform her father of the plan, nor for Hotah to intercept them, and certainly not Gerold Dayne's unprovoked attack on Myrcella. Dayne escaped from Hotah's men, but he left a terrible scar on Myrcella's face, barely missing a beheading stroke as was his apparent intent. Thinking her father would see her within a day, Arianne becomes distraught as days turn into weeks, and although servants come and go with food, none will speak to her. She considers who could have betrayed her, ponders her feelings at the loss of Ser Arys, and thinks of her close relationship with Tyene. She eventually persuades the young serving girl Cedra to deliver a letter to Lord Fowler, knowing that the girl has feelings for Garin (who, Arianne assumes, is imprisoned at Ghaston Grey along with her other co-conspirators). But the next day, Cedra does not return, and Arianne never sees her again during her imprisonment.

After an indeterminate period of agonized waiting, Areo Hotah arrives to bring her before her father. Prince Doran asks her why, to which Arianne replies, "For the honor of our House." The Prince tells her they have not caught Dayne, but the damage he did to Myrcella, a ward of their house, has done naught but bring the Martells dishonor. He cautions her that a war with the Iron Throne is the last thing they need. Although the Young Dragon wrote that Dorne was populous, his memoirs were written to portray himself in a better light. Prince Doran admits that Dorne is actually the least populous of the Seven Kingdoms, and could not survive open war with the Throne. He admits it was a mistake not to have had her taken prior to running off with Myrcella, but he will not reveal who betrayed her. When he tells her that she disappoints him, Arianne retorts, "You have been disappointing me for years, Father."

Prince Doran discloses that none of her co-conspirators are imprisoned. Instead, he has sent Ser Andrey Dalt to Norvos to serve Arianne's mother; Garin is in Tyrosh for two years; and Sylva was sent to Greenstone to marry Lord Eldon Estermont. He goes on to remark that Arianne and her cousins may get the war they wanted, as Ser Balon Swann is on his way to Sunspear. The Prince has several of his bannermen stalling him, but eventually Ser Balon will discover that his brother in the Kingsguard, Ser Arys, is dead and Myrcella maimed.[1] Arianne continues to taunt her father, and he cautions her that he is out of patience. But the princess is unimpressed, remarking, "For Lord Tywin you always had the forbearance of Baelor the Blessed, but for your own blood, none." He responds, "You mistake patience for forbearance. I have worked at the downfall of Tywin Lannister since the day they told me of Elia and her children." 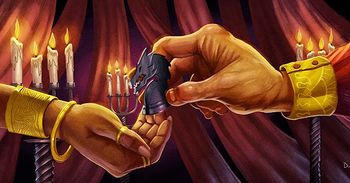 When Arianne tells him that she wants her rights to Dorne, Prince Doran finally reveals that she will have the kingdom when he passes. Arianne divulges that she knew of his scheme to make Quentyn his heir, but her father tells her that he had other plans for her. He offered her hand to old men because he knew she would rebuke them, but he had to be seen as trying. All along, he had promised her to Prince Viserys, but now that the last male Targaryen is dead, he has no reason to deny her her right to Dorne. He finishes by saying, "We princes make our careful plans and the gods smash them all awry." His original plan was to send her to Tyrosh to serve as the Archon's cupbearer, where she could meet her betrothed in secret, while her brother Quentyn was being raised to assume the seat of their House. Finally he reveals why her brother is overseas: to bring back their heart's desire. When Arianne asks what that is, her father presses a cyvasse dragon piece into her hand and replies, "Vengeance. Justice. Fire and blood."