After exploring the camp, Sansa Stark goes riding with her betrothed, Prince Joffrey. Near the ruby ford, they come upon Arya Stark and a butcher's boy play-fighting. Joffrey begins to torment the boy until Arya attacks him.

Sansa is having breakfast with Septa Mordane in an inn near the Trident. When Sansa feeds her direwolf Lady under the table, the septa says that although Sansa is a good girl she is as willful as her sister Arya when it comes to her direwolf.

The septa informs Sansa that they have been invited to ride in the wheelhouse with Queen Cersei and Princess Myrcella. Sansa has been looking forward to this for a week, hoping for a chance to be with Prince Joffrey. Joffrey is everything she ever wanted her prince to be like: tall and strong and handsome. The one thing Sansa is afraid of is that Arya will ruin everything for her. Septa Mordane wants Sansa and Arya to dress well for the event and Sansa has already decided on a fine silk dress. She does not expect Arya to wear anything appropriate. Sansa begs to be excused so she can look for Arya.

She finds Arya on the banks of the Trident, trying to comb the mud out of her direwolf Nymeria's fur. Arya is not interested in riding in the wheelhouse, and intends to go riding with Mycah to look for rubies in the river. Sansa insists that there is no fun in riding because there is nothing to see, but Arya is fascinated by all the new flowers and landmarks and people they are seeing along the way. Sansa informs Arya that she has to come, asking why anyone would want to ride a stinky horse when they could ride in the wheelhouse on pillows while eating lemon cakes and keeping company with the queen. Arya replies that she does not even like the queen and still intends to go riding. Sansa, giving up, leaves but Arya yells after her that Lady will not be allowed in the wheelhouse, which leaves Sansa speechless.

When she nears the camp, Sansa sees a crowd gathered around the wheelhouse; the council has sent an honor guard from King's Landing to accompany them the rest of the way. The party includes two knights in fine armour: a strong old man in white armor and a beautiful young man in green armor. There is also a gaunt, grim man that Sansa finds so terrifying that she backs right into Sandor Clegane. Sansa kneels and hugs Lady and, next thing she knows, the two new arrivals are standing above her. Joffrey explains that the terrifying man is Ser Ilyn Payne, the King's Justice (the royal executioner).

The white knight then introduces himself as Ser Barristan Selmy, Lord Commander of the Kingsguard, but the green knight insists that she guess. Based on his age and his antlered helm, Sansa correctly deduces him to be the king's youngest brother, Lord Renly Baratheon. Feeling more comfortable, Sansa apologizes to Ser Ilyn Payne, but the man does not speak. Once he has left, Joffrey explains that his tongue was ripped out by Mad King Aerys.

The Queen says that she must speak with the councilors, and therefore must postpone the day with Myrcella. Instead, she asks Joffrey to entertain their guests—Sansa is overjoyed with the idea of a whole day with Joffrey. Sansa offers to do whatever the prince wants, and when Joffrey suggest they go riding, Sansa gushes that she loves riding. Joffrey then suggests that it would be best to leave Lady and his dog, Sandor Clegane, behind. When Sansa questions leaving Clegane behind Joffrey brandishes his sword, Lion's Tooth. 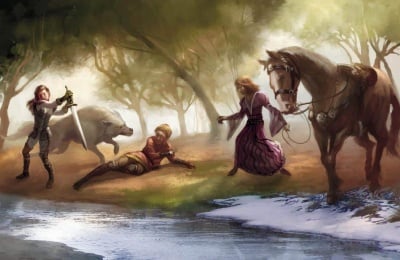 They ride along the river, exploring the countryside until they draw near to the battlefield where King Robert defeated Rhaegar Targaryen. Then they hear an odd sound, like wooden clattering, coming from nearby. In a nearby clearing, they find a boy and a girl play-fighting with sticks. The boy, taller and older than the girl, is winning. When the girl is disarmed by a smack on the hand, Sansa recognizes her as Arya. Joffrey laughs and the boy, a butcher's boy named Mycah, drops his stick. Joffrey begins to taunt Mycah and challenges him to a fight, sword against stick. Mycah insists that Arya asked him to fight her, which Sansa quickly realizes is the truth. Joffrey remains oblivious however, and goes so far as to prick the boy's cheek with his sword. Arya picks up her stick and tells Joffrey to leave Mycah alone. Joffrey insists that he will not hurt Mycah, much.

Without warning, Arya breaks her stick over the back of Joffrey's head. Mycah runs away while an enraged Joffrey staggers but manages to catch a second blow from Arya on his sword, knocking the splintered stick from her hand. Ignoring Sansa's screams for them to stop, Arya throws a rock and hits Joffrey's horse, driving it away. Joffrey chases Arya with his sword until she is backed up against a tree. Suddenly Nymeria appears, savaging Joffrey's sword arm and forcing him to drop his sword. Arya calls Nymeria off and picks up Lion's Tooth while Joffrey lies whimpering on the ground. The prince pleads to Arya not to hurt him. Arya throws the sword into the river before running off with Nymeria.

Once Arya is gone, Sansa goes to help Joffrey tenderly, but he snarls at her to leave and not touch him and Sansa can see the contempt in his eyes.

This page uses content from Wikia. The original content was at A Game of Thrones: Chapter 15. The list of authors can be seen in the page history. As with A Wiki of Ice and Fire, the content of Wikia is available under the GNU Free Documentation License.