Lady Catelyn Tully seeks out her husband, Lord Eddard Stark, in the godswood of Winterfell to inform him of the news that his foster father, Lord Jon Arryn, the Hand of the King, is dead, and that King Robert I Baratheon, his family, and half his court are on their way to Winterfell. 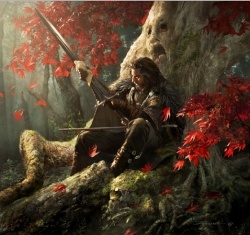 Eddard Stark in the godswood of Winterfell, by Michael Komarck ©

Catelyn Stark seeks out her husband Eddard in the godswood following his return to Winterfell. She knows her husband always goes there after executing a man. She finds the godswood dark and unsettling compared to the sunny one she remembers from her childhood home in Riverrun. Unlike House Tully, who follow the Faith of the Seven, House Stark keep faith with the old gods.

Catelyn finds Ned polishing his ancestral greatsword, Ice, under the heart tree at the center of the grove. He asks after the children, and Catelyn tells him they are deciding on the names for their new wolves. Ned notes that the man he executed is the fourth deserter this year. He adds that the man was half mad, that something had put a fear into him so deep that he could not reach him. The Night's Watch is dwindling, down to less than a thousand men, not just from desertions, but from ranging casualties. One day Ned may have to call his banners to fight Mance Rayder himself. Catelyn warns him that there are darker things beyond the Wall. Ned replies that the Others have been dead for eight thousand years, and that Maester Luwin claims they never existed at all. Catelyn replies that nobody had seen direwolves until today.

When Ned asks why Catelyn has come, she tells him that Jon Arryn, his foster father and her brother-in-law, is dead. The news came in King Robert's own hand. When asked, Catelyn explains that Jon Arryn's widow—Catelyn's sister Lysa Arryn—and her son have returned to the Eyrie, and Catelyn says that she thinks her sister should not be alone and should have gone back to Riverrun. Ned urges Catelyn to take the children to keep her sister company, but then Catelyn informs him that Robert Baratheon has also written to say he is coming to Winterfell. This news gladdens Ned; it has been nine years since he last saw his old friend. However, Catelyn is worried about the omen of a direwolf found dead in the snow with an antler buried in its throat.

With Robert coming, Catelyn confirms with Ned that they should send word to his brother Benjen on the Wall. Then Catelyn informs Ned that Robert's wife, Queen Cersei Lannister, their children, and her Lannister brothers are also coming. Ned does not like the Lannisters because they came to Robert's cause only after victory was certain. Eddard is looking forward to seeing the children and then announces his worry about feeding them all.

This page uses content from Wikia. The original content was at A Game of Thrones: Chapter 2. The list of authors can be seen in the page history. As with A Wiki of Ice and Fire, the content of Wikia is available under the GNU Free Documentation License.