Unhappy at King's Landing, Arya abandons her dinner. Her father comes to her room to talk to her and sees she has her sword out. After a long talk, he decides not to take the sword away. Several days later, Arya meets her new dancing master.

Sansa is tremendously excited by the prospect of a tourney and begs to be allowed to attend. When Septa Mordane mentions his family will be expected to attend, Eddard agrees to ensure that seats are provided for both Sansa and Arya. Knowing that Prince Joffrey will be there, Arya insists she does not want to attend a stupid tourney. When Sansa taunts that Arya would not be wanted anyway, Eddard loses his temper and threatens to change his mind.

Quickly regaining his composure, Eddard excuses himself. Once he is gone, his guardsmen start talking excitedly about the tourney. No one talks to Arya but she likes it that way. Back in Winterfell she had enjoyed listening to the men talk, but now the sounds irritate her because she blames them all, even her father, for doing nothing to save Lady and Mycah.

After looking disgustedly at her cold food and the people around her, Arya pushes away from the table. When Septa Mordane insists that Arya hasn’t eaten, she dashes away. She runs to her chamber and locks herself in. She digs to the bottom of her chest where her sword Needle is hidden. Arya thinks that if she could climb like her brother Bran she could steal some food and run away and that if Jon Snow was there she would not feel so lonely.

A soft knock on her door proves to be her father, who says they need to talk and asks politely to come in. From the way he talks, Arya is ashamed to realize he is more sad than angry. When she lets him in, her father immediately notices her sword and asks whose it is. Arya explains that it is hers and her father asks to see it. Her father notices Mikken’s mark on the blade and remarks that if his nine-year-old daughter can be armed from his own forge without his knowledge, how can he be expected to rule the Seven Kingdoms? 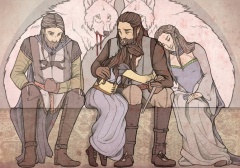 Eddard asks who gave her the sword but Arya stays silent, not wanting to betray Jon. Her father accepts this but tells Arya that a sword is not a toy. When asked what she thinks Septa Mordane would say about her playing with a sword, Arya insists she was not playing. Eddard states that he should break the sword over his knee. Arya responds that “Needle wouldn’t break.” The sword having a name amuses her father, who claims that Arya reminds him of his sister, Lyanna, who might have carried a sword if their father had allowed it. Arya is surprised when Eddard says she looks like her aunt, who was always described as beautiful, something never said of Arya.

Eddard asks if Arya knows anything about how to use a sword, and she replies with the advice Jon gave her: “Stick 'em with the pointy end.” She tells how she was trying to learn and sadly adds that she asked Mycah to practice with her. In grief she starts to sob against her father’s chest. He tells her that Mycah’s death was not her fault. Arya sobs that she hates them all: the Queen, the Hound, Joffrey, and the King. Then she adds that Joffrey lied, and that she also hates Sansa.

Eddard says that everyone lies and that he does not believe that Nymeria ran off. Arya then exclaims that Jory promised not to tell. Eddard informs her that Jory did not tell but that he had figured it out, because even a blind man could tell that the wolf would not have left willingly. Arya then explains how she and Jory had to throw rocks to drive the wolf away. She then asks her father if she did the right thing and Eddard assures her that she did. 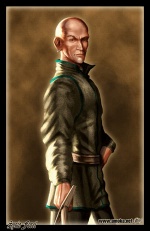 Eddard then tells Arya that winter is coming. He explains to her how wolves stick together, and that in the winter a lone wolf dies. Now there are enemies threatening the Starks, so they must stick together like a pack of wolves and it is time for her to start growing up. He hands Arya back her sword, saying she can keep it; he only asks that she not stick her sister.

Three days later, Arya is sent to the Small Hall by the steward. She is met by Syrio Forel, a former First Sword of Braavos. He tells her that he is her dancing master, and throws her a wooden sword, which she cannot catch. Unperturbed, Syrion tells Arya that the next day she will be there at midday and catch the blade. She picks the practice sword up as instructed and finds that it is very heavy. When she complains about the weight, Syrio explains that it is heavy to make her strong. Then he fixes her grip, telling her not to squeeze too tight. When Arya says that she might drop it, Syrio tells her that the sword must become a part of her arm, and that she cannot drop a part of her arm.

When Syrio calls her a boy for the third time Arya objects. He insists that it does not matter; a sword has no gender. He then explains that what he will be teaching her is not the hacking and hammering iron dance of Westeros, but the swift and sudden Water Dance of Braavos,. Then he tells her to try to strike him, and she tries unsuccessfully for four hours until every muscle is sore. The next day the real work begins.