Littlefinger leads Ned to the brothel that Jon Arryn visited. There he talks to a young whore with a daughter that has the look of King Robert. As they are returning to the Red Keep, Ned’s party is ambushed by Jaime Lannister and about 20 of his men. In retribution for the abduction of his brother, Jaime has Ned’s escort killed. Ned’s leg is broken during the fight, and he loses consciousness.

Ned finds Littlefinger in the common room of the Chataya's brothel talking with an elegant black-skinned woman. His guardsman Heward is gambling for the removal of clothes with a whore while Jory Cassel watches from the window. Ned declares his business done, and Jory moves to bring the horses around while Littlefinger makes a joke about what part of the king’s anatomy the Hand of the King might be filling in for in a brothel. In no mood for Littlefinger’s jokes, Ned gruffly declares he is no longer the Hand. Outside, it is raining as they mount up. As they ride the deserted streets, Littlefinger tells Ned that he is considering buying the brothel because brothels make much sounder investments than ships; they do not sink and pirates pay good coin like everyone else.

As they ride back toward the Red Keep in the rain, Ned remembers the night his sister Lyanna was betrothed to Robert. Lyanna had told him that Robert would never keep to one bed. Ned, who had already held Robert’s first bastard daughter, assured her that Robert was a good man who would love her with all his heart. Lyanna responded that one could not change a man’s nature. After what he has seen this night, Ned cannot say his sister was wrong.

Ned’s business at Chataya's brothel was to meet the prostitute with Robert’s bastard daughter named Barra. The child resembled Robert, and the girl was proud to show him that the baby had the king’s nose and hair. Ned still remembers that Robert’s firstborn had the same hair. The girl asked him to tell Robert how beautiful their daughter is, that she has not been with anyone else, and that she is waiting for him. Eddard vowed that she and the child would be well cared for. As he rides, Ned reflects that he is cursed to always keep his promises, while Robert can swear undying love and forget it by the morning.

Ned thinks about Jon Snow and wonders why the gods give men such lust only to frown on bastards. Ned then asks Littlefinger about Robert’s bastards. Littlefinger says he does not know exactly how many there are. He goes on to speak in detail about Robert’s acknowledged bastard Edric Storm, the son of a cousin to the king’s sister-in-law. Littlefinger also speaks of a rumored pair of twins of a serving maid at Casterly Rock which Cersei had killed. Ned is surprised that Robert would stand by and let such a thing happen, but then recalls that Robert seems to have grown adept at shutting his eyes. 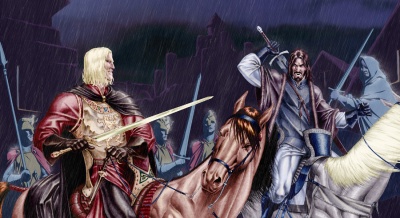 Ned asks why Jon Arryn would suddenly take such an interest in Robert’s bastards. Littlefinger suggests that maybe Robert asked him to. Ned declares that Jon Arryn was killed for something more than that. Littlefinger says scornfully that maybe Lord Arryn had to be silenced for discovering Robert had bastard children, scoffing that next the man might be audacious enough to claim the sun rises in the east. Ned thinks of Rhaegar Targaryen for the first time in years, and wonders if the Dragon Prince frequented brothels; somehow he thinks not.

Suddenly they are surrounded by at least 20 Lannister guardsmen. Jaime Lannister rides up and declares that he is looking for his brother who apparently had some trouble on the road. Ned tells him that Catelyn took Tyrion prisoner to answer for his crimes. This causes Littlefinger to groan in dismay and Jaime to move forward and draw his sword. Jaime demands that Ned show his steel, declaring that he will butcher Ned but prefers it if Ned will fight back. Jaime then suggests Littlefinger leave if he does not want blood on his expensive clothes. Littlefinger needs no urging, but assures Ned that he will bring the City Watch.

The Stark guardsmen have drawn their swords, but it is three against twenty, so Ned reminds Jaime that if he dies, Catelyn will kill Tyrion. Jaime doesn’t believe him but is unwilling to chance it, so he tells his men not to harm Ned. Yet Jaime refuses to leave Ned entirely unchastened so he orders Ned’s guardsmen killed. Ned and his men are quickly overwhelmed and Heward and Wyl are cut down. Jory manages to break free, but returns almost immediately and is killed. In the confusion, Ned’s horse slips and falls and Ned is blinded by the pain of his leg breaking.

When he opens his eyes again, Ned drags himself through the mud. When Littlefinger and the gold cloaks finally arrive they find him cradling Jory’s dead body. He is returned in horrid pain to the Tower of the Hand, where Grand Maester Pycelle attends to his injury.