The khalasar enters Vaes Dothrak. As they ride up the godsway, Daenerys discusses the pros and cons of Dothraki combat skills with Ser Jorah Mormont. Once they have settled in, Daenerys invites Viserys to sup with her and makes a peace offering of new clothes. He becomes angry and grabs her. She hits him hard with a belt and tells him to leave. 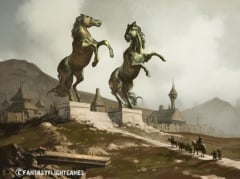 The khalasar enters Vaes Dothrak under the Mother of Mountains and proceeds along the godsway, passing under the gigantic Horse Gate, a pair of rearing bronze stallions whose hooves meet a hundred feet up. Daenerys wonders why Vaes Dothrak needs a gate when it appears to have no walls, no buildings, and no people. All that Daenerys can see are ancient monuments that the Dothraki have sacked over the centuries in the grass on either side of the godsway.

As she looks back at her brother Viserys, who is now mounted again, Daenerys thinks back on the events of the long ride east. After the incident on the Dothraki Sea, Viserys had been forced to walk and the Dothraki had named him Khal Rhae Mhar, the “Sore Foot King.” Viserys did not realize that he was being mocked when he accepted a ride in a cart from Khal Drogo, which earned him another name, Khal Rhaggat, the “Cart King.” Daenerys had begged Ser Jorah not to tell Viserys the truth, and only after much pleading had she convinced Drogo to allow Viserys to ride again.

Now, as they ride past the broke idols of fallen cities, Viserys tells Daenerys that all the Dothraki savages can do is steal things better men have built and kill, which is all he needs them for. He goes on to say the Dothraki cannot speak the language of civilized men, and then states that he is tired of waiting for Drogo to give him his army. Ser Jorah tells Viserys that Drogo will honor his promise in his own time. Fortunately, few of the Dothraki can understand the Common Tongue. After Viserys leaves, Ser Jorah explains that the Dothraki are not merchants and do not trade; despite what Viserys thinks, Khal Drogo considers Daenerys a gift and will eventually give a gift in return.

Daenerys points out that it is not right to make her brother wait, and says Viserys believes he can sweep the Seven Kingdoms with 10,000 Dothraki. Ser Jorah snorts that Viserys could not sweep a stable with 10,000 brooms. Daenerys asks whether it would be possible for someone stronger than Viserys. Ser Jorah tells her that when he first came to Essos he saw the Dothraki as half-naked barbarians and believed that a thousand good knights could put a hundred times as many Dothraki to flight. Now he is not so sure; the Dothraki are better riders, their bows (wielded from horseback) have a longer range, and there are so many of them. Drogo alone commands 40,000 men, the same number that Rhaegar brought to the Battle of the Trident, and only a tenth of Rhaegar's men were knights. When Rhaegar died, many fled the field and such a rabble would not last long against 40,000 Dothraki. However, the Dothraki have no patience for siegecraft and if the armies of Westeros stayed behind their castle walls they could hold out forever. Robert Baratheon might be fool enough to give them battle, but the men around him are not: Stannis Baratheon, Tywin Lannister, and Eddard Stark. The way he says the last name leads Daenerys to ask if Ser Jorah hates the man. Ser Jorah replies that Eddard Stark took everything he loved from him for a few lice-ridden poachers and his precious honor.

They arrive at the city, which is both the largest and the smallest Daenerys has ever seen; it sprawls ancient, arrogant, and empty across the plain. The buildings are all different. Ser Jorah explains that they are built by slaves in the fashion they were familiar with. He also explains that the only permanent residents are the dosh khaleen, the widows of all the khals who have come before, yet Vaes Dothrak is large enough to house all the khalasars if they should all return at once, as is prophesized.

When they near the eastern market and dismount, each rider gives up all his weapons to a waiting slave, for in Vaes Dothrak no man may carry steel or spill blood. The palace of Khal Drogo is a massive feasting hall of roughhewn logs that make a wall 40 feet tall with a roof of silk surrounded by horse yards and hundreds of earthen houses.

Daenerys is met by Cohollo, one of Khal Drogo’s bloodriders, who informs her that Drogo must ascend the Mother of Mountains that night to sacrifice for his safe return. As she speaks to Cohollo, Daenerys recalls that the khal’s three bloodriders are his sworn brothers who share everything with him except his horses. Daenerys is glad that Drogo does not hold to the tradition of sharing her with his bloodriders because some of them frighten her. Bloodriders are bound to their khal for life and die when he dies, living only long enough to avenge him if required. Daenerys finds herself wishing her father was guarded by such men, remembering the stories of the Kingslayer who murdered her father and Ser Barristan Selmy who went over to the Usurper.

Daenerys, who is tiring easily as her child grows, is looking forward to a night of rest. She is led to one of the hollow hills that has been prepared for her. She decides to give her brother his gifts tonight. She has prepared Viserys several sets of clothes that she hopes will help him earn the respect of the Dothraki. She also intends the gifts as a way of apologizing for shaming him. Daenerys orders Doreah to invite him to supper and Irri to go to the market to buy something other than horse meat, which Viserys hates.

Viserys soon arrives, dragging Doreah by the arm, furious that Daenerys would presume to give him commands. Daenerys attempts to explain that Doreah misspoke, then shows Viserys the clothes she has had made for him. Viserys only sneers at the clothes, calling them Dothraki rags. Her brother goes on to ridicule her for presuming to dress him and suggests spitefully that next Daenerys will want to braid his hair. Daenerys declares that he has no right to a braid because he has won no victories.

Viserys grabs her by the arm, hurting her, and for a moment Daenerys is a scared little girl again. Then she grabs hold of the first thing she touches, a medallion belt she meant to give Viserys, and swings it with all her strength. The belt hits her brother full in the face and leaves a deep cut. Daenerys tells Viserys to leave and pray that Drogo does not hear of this. Viserys leaves in a fury, telling her that when he comes into his kingdom she will regret this day.