Ser Alliser announces that he is passing eight recruits, including Jon. There is a celebration, but Jon realizes that Sam will not survive without the others to protect him. Jon asks Maester Aemon to allow Sam to become his steward since he can read, write, and do sums.

Five new recruits are being marched up the kingsroad, so Ser Alliser is passing eight boys on to the Lord Commander: Todder, Halder, Grenn, Dareon, Albett, Pypar, Matthar, and Jon. He then tells the boys that some will now call them men, but they are fools to believe it and when winter comes they will die like flies. Then Ser Alliser leaves.

The recruits gather around and offer congratulations to those promoted. As the boys pass a celebratory wineskin around, Jon notices Sam standing by himself and goes over to him. Sam proclaims that Jon will be first ranger someday, like his uncle “was.” Jon corrects this to “is.” Halder interrupts to ask if Jon is going to drink the wine he is carrying. Then Pyp grabs the wineskin, and squirts it into Jon’s face. Soon the ecstatic boys start a snowball fight and by the time Jon can break free, Sam has disappeared.

The promoted boys are treated to a marvelous feast that night to celebrate. The group discusses and jokes about their assignments: ranger, builder, woodsman, steward. They are all convinced that Jon, as the best swordsman and rider, will be a ranger, like his uncle “was” the First Ranger. Jon corrects this to “is” once again before pushing his food away and leaving. Pyp follows and asks what is wrong. Jon explains that it is because Sam is not with them. Without them to protect him, Sam will be at the mercy of Ser Alliser. Pyp assures Jon that they did all they could for Sam, but that is not good enough for Jon. Jon goes for a long ride by himself.

As he rides he thinks about the world outside the Night's Watch and reminds himself that he has not yet sworn his vow. He thinks of all the places he has wanted to travel to and will never visit. He longs to go back to Winterfell to be with his half-brothers, but then remembers that Lady Catelyn will not welcome him. Jon decides that there is no place for him in Winterfell or King's Landing, and remembers that not even his mother had a place for him. Whoever she was, his mother must be something dishonorable, otherwise why would Lord Eddard be too ashamed to speak of her? On the ride back Jon thinks about what he should do about Sam. 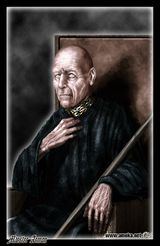 Jon visits Maester Aemon despite the late hour. Aemon’s stewards, Chett and Clydas, considered the ugliest men in the Watch, meet him at the door. Chett insists that the maester is asleep and orders Jon to come back in the morning. Jon puts his foot in the door to prevent it closing, and refuses to leave since tomorrow will be too late. Chett goes to get the maester, while Jon goes to the library and starts a fire as instructed.

When Maester Aemon arrives, he sits by the fire and assures Jon that a midnight visitor is a welcome diversion from the sleeplessness of old age. Jon asks that Sam be accepted as a sworn brother along with the others. Chett complains that it is no concern of the maester and Maester Aemon agrees that training is the responsibility of Ser Alliser. Jon continues on to explain about all he and the others have done to protect Sam.

Chett remains adamant that Ser Alliser will make a man of Sam or kill him trying. Jon replies that the Watch has need of every man and thus to kill one in futile training would be stupid. Recalling Maester Luwin’s words about why a maester’s chain is made of many kinds of metal, Jon declares that the Watch (like a kingdom) needs all sorts of skills and knowledge. Then Jon asks why Sam could not be a steward. As a steward, Chett objects that it is not easy work fit for cowards: they keep the Watch alive by hunting, farming, gather firewood, make clothing, and bring up supplies. Maester Aemon calmly names a number of steward duties and Jon has to admit that none of them suit Sam. Then Jon declares that there is one thing Sam can do better than anyone else: help Maester Aemon, since he can do sums, read, write, and is good with animals like the ravens. The maester considers this for a while and then tells Jon that he will think on it.