Ned now knows the truth Jon Arryn died for. He also learns from Pycelle and Petyr Baelish that Lord Tywin Lannister is preparing for a war. Later, Ned meets with Cersei and tells her that he will tell Robert the truth when he returns, offering her the chance to flee and save her children. Cersei warns that Ned has made a mistake. 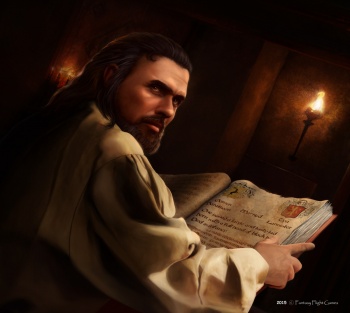 Lord Eddard Stark reads The Lineages and Histories of the Great Houses of the Seven Kingdoms, by Tiziano Baracchi © Fantasy Flight Games

Grand Maester Pycelle tells Eddard Stark that the pain means that the bone is healing, but Ned only replies that he will be happy when his leg stops throbbing. Pycelle provides him with the milk of the poppy for the pain, but Ned says he sleeps too much already. Pycelle tells him sleep is good for healing.

Pycelle informs Ned that Queen Cersei has received a letter from her father. Lord Tywin is angry about Ned sending men to bring Ser Gregor Clegane to justice. Ned replies that it does not bother him; Lord Beric Dondarrion rides under the king’s banner and if Lord Tywin attempts to interfere he will have Robert to answer to, and the only thing Robert likes better than hunting is making war on defiant lords. Pycelle leaves, telling Ned that he will come again the next day.

Ned knows Pycelle is Cersei's creature, and does not care. He is not actually confident in Robert, but he does not want Cersei to know that. He calls for honeyed wine, which will not cloud his mind as badly as the milk of the poppy, because he needs to think. Ned thinks how sometimes a child’s innocent eyes can see things that grown men are blind to and how some day he will have to tell Sansa how she made it all come clear to him.

Littlefinger pays a visit an hour after Pycelle leaves, bringing news that Varys has heard whispers that sellswords are flocking to Casterly Rock. Ned asks about Robert and is told that, having found the white hart dead, the king is now after a fierce boar. Most of the hunting party has returned, however, including Prince Joffrey and Sandor Clegane. Littlefinger states that he would have liked to have seen the Hound's reaction to learning that Beric Dondarrion is after the brother he hates. With that Littlefinger leaves for a dinner, but not before noting the book of The Lineages and Histories of the Great Houses of the Seven Kingdoms, and teasingly asking if it is a sleeping potion.

Ned considers that, outside of his retainers, there is not a man in the city he trusts: Littlefinger leaving before the slaughter of his guard rankles him, Varys knows too much and does too little, Pycelle is Cersei's, and Ser Barristan is too old and rigid in his sense of duty.

Arya and Sansa will sail in three days. Ned knows that honor will require him to go to Robert with all he knows when he returns. Last night he dreamed of when Lord Tywin had presented the bodies of Prince Rhaegar Targaryen's children to Robert. Ned remembers that Robert could be merciful if a man were brave and honest; he had pardoned Ser Barristan, Varys, Pycelle, Balon Greyjoy, and Littlefinger and let them keep their office for an offer of fealty. However, poison in the dark he will never forgive and would kill them all. Bran must have learned some part of the truth; otherwise they would not have tried to kill him. Ned decides that he must find a way to save the children.

Ned calls in Fat Tom, now in command of his guardsmen, and asks to be taken to the godswood. Ned also orders the guard doubled despite the shortage of manpower. Ned sends Tom to find Queen Cersei and give her a letter inviting her to join him. As he sits in the godswood, Ned feels the presence of his gods under the faceless heart tree and his leg does not seem to hurt as much.

When Cersei arrives at nightfall, Ned notes that she is proudly displaying the bruise Robert has given her. For the first time in a long time, Ned can see her beauty. When he declares that he knows the truth Jon Arryn died for, Cersei scoffs whether he has brought her here to pose riddles or to kidnap her. Ned replies that if she believed such things she would not have come. He then asks about the bruise, and if Robert does such things often. She replies that it has never been on the face before and that her brother Jaime would have killed Robert if he knew. When Ned suggests a correction of “brother” to “lover,” Cersei does not trouble to deny it. Cersei admits that she and Jaime have been lovers since they were children and that when Jaime is in her she feels whole. When Ned asks about his son Bran, Cersei admits that he saw her and Jaime, offering her love for her own children as a reason for the attempted murder. Ned counters with a declaration that all three of Cersei’s children are Jaime’s. The last time a Baratheon had a child with a Lannister was ninety years before when Tya Lannister wedded Gowen Baratheon; the single child was large and lusty boy with a full head of black hair. Thirty years before that a Lannister had taken a Baratheon maid; all the children had black hair. According to The Lineages and Histories of the Great Houses of the Seven Kingdoms, the children of a Lannister and a Baratheon always had black hair.

Ned asks Cersei how it is possible that she never had a child by the king, and she admits she almost did but had the child aborted. Cersei goes on to claim that she cannot stand to even touch Robert now, and has not let him inside her for years. Instead she pleasures the king in other ways when he leaves his whores long enough; Robert is always so drunk that he never remembers.

When Ned asks what made her hate Robert so much, Cersei reveals that on their wedding night Robert called her “Lyanna” in the midst of the consummation. The story leads Ned to declare that he does not know which of them to pity more, but that he must still do his duty. Cersei makes a sexual advance on Ned while telling him that the realm needs a strong Hand and that he will never regret being kind to her. Ned immediately rejects the advance by asking if she made the same offer to Jon Arryn and she slaps him. Offended by Ned’s honorable persona, Cersei brings up Jon Snow and accuses Ned of many other possible debaucheries.

Ned makes it clear that he intends to tell Robert everything when he returns and warns Cersei to leave King's Landing. He recommends that she take a ship to the Free Cities with all her immediate family, including her father Tywin, to escape Robert's wrath. Cersei stands, laughs, and declares Ned a fool for not taking the throne himself fourteen years before, when he forced Jaime to surrender the seat. Ned replies that he has made more mistakes than Cersei can imagine, but that was not one of them. Cersei insists that it was, saying "When you play the game of thrones, you win or you die. There is no middle ground."