Catelyn and Ser Brynden Tully meet Robb’s army at Moat Cailin, accompanied by the host from House Manderly. In private, Catelyn helps Robb refine his war plans and explains to him that they have no option but to win or die. Robb decides to go south in support of Riverrun with a feint down the kingsroad to keep Lord Tywin Lannister’s force occupied.

As they approach Moat Cailin, the ancient fortress of the First Men which guards the Neck, Catelyn is relieved that they are not too late. She is accompanied by Ser Brynden Tully and Ser Wylis and Ser Wendel Manderly with their 1,500 men, including 20 knights and 200 mounted men. Their father, Lord Wyman Manderly—who is too fat to sit a horse—has remained to see to the defenses of White Harbor but sent his two stout sons, who would have been the fattest men Catelyn had ever seen if she had not met their father.

Ser Brynden, upon seeing the fortress, thinks it is a deathtrap. Most of the ancient fortress has long since rotted away leaving only 3 out of 20 towers. Catelyn reassures him that, according to her husband, it is more formidable than it seems. The three remaining towers command the only causeway across the impenetrable bogs of the Neck; to assault any one of the towers an enemy must wade through waist-deep muck and lizard-lion-infested moats then climb the moss-covered towers while exposed to attack from the other two towers. In addition, there are also supposed to be cold, vengeful ghosts of the North that hunger for southron blood. Ser Brynden jests that he, as a southron, should not linger in this place. 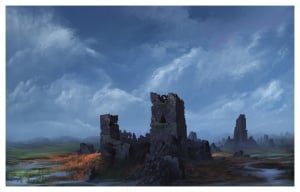 Catelyn heads for the Gatehouse Tower, understanding the lone Stark banner to mean that Robb has made his seat there. She arrives to find Robb surrounded by his father’s bannermen in a drafty hall. At first, Robb does not notice Catelyn, but his wolf does. After his bannermen fall quiet, her son looks up and is happy to see her. Each of the lords pay their respects to her, Theon Greyjoy being the last. He expresses surprise at Catelyn’s presence, so she explains that she learned Robb had called the banners when she came ashore at White Harbor. She then introduces the Manderly brothers and her uncle.

When Robb asks, Catelyn explains that she has sent Ser Rodrik back to Winterfell to act as castellan and to assist Maester Luwin in military matters. After some of the lords give Catelyn reassurance that Winterfell is safe, Lord Roose Bolton states that it is rumored she holds Tyrion Lannister, who would be a good hostage. Catelyn admits she lost the dwarf because the gods saw fit to free him with help from her sister. Speaking of Lysa, Catelyn recalls that before leaving the Eyrie, she attempted to convince her sister to let her take Robert Arryn as a fosterling, but Lysa’s rage had been frightening.

Catelyn then sends the bannermen and Theon away to speak to Robb alone. Once they are gone, Catelyn notes that her son looks older, especially with his new beard. Catelyn, who is afraid for her son, notes to Robb that he is only fifteen and leading a host to war. Robb insists that there was no one else. Catelyn argues that he could have given command to any of the bannermen, or even Theon, although he would not have been her choice. Robb responds that none of them are Starks. Catelyn then reminds Robb that he was fighting with wooden swords less than a year ago. Robb’s eyes flare with anger, but he softens and asks if she is sending him back to Winterfell. Catelyn explains that she cannot do such a thing; if she did, the bannermen would lose respect for him, which would hurt him when he becomes Lord of Winterfell one day. Robb’s relief is obvious.

Robb asks if Catelyn knows about Lord Eddard's capture and she says she does; Robert's sudden death and Eddard’s fall scared her greatly. Catelyn asks about the girls and Robb tells her that letters addressed to each of them from Sansa arrived at Winterfell. Robb returns with a crumpled parchment and hands it to her. She reads it with concern giving way to disbelief, then to anger, and then to fear. She exclaims that it is Cersei’s letter, and that they have Sansa hostage and mean to keep her. Robb points out that there is no mention of Arya and that he was hoping that Catelyn still held Tyrion to exchange for his sisters. 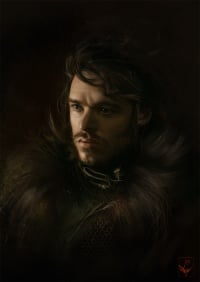 Robb then asks about the knights of the Vale and is told that Lysa will do nothing; only one knight of the Vale will ride to war: the best, Ser Brynden Tully. Robb asks Catelyn what they are going to do with the 18,000 men he does have. Catelyn can tell that Robb is caught in indecision, which will not do. Knowing he is worried about his father and sisters, Catelyn explains to her son that if he goes to King's Landing to bend the knee he will never be allowed to leave, and if he retreats to Winterfell his lords will lose respect for him. In either case, Cersei can then do as she likes to her captives without fear. Their only hope is that Robb can defeat the Lannisters in the field; Cersei cannot harm her captives because she will need them as hostages if things go against her. However, if Robb loses there is no hope for any of them and they will suffer the fate of the Targaryen children; there is naught but stone at the heart of Casterly Rock. Robb states that that makes it simple: he will not lose.

Catelyn then asks about the situation in the Riverlands. Robb informs her that the war has begun. A fortnight past, Ser Jaime Lannister smashed the Tully force led by Lords Vance and Piper at the Golden Tooth and is now advancing on Riverrun. Meanwhile, Lord Tywin Lannister has come up from the south with an even larger army. This army ambushed the party of Lord Beric Dondarrion sent to bring Gregor Clegane to justice, killing Raymun Darry and most of the men from Winterfell. Lord Beric may have escaped, but no one knows for sure. Now Lord Tywin is marching north to Harrenhal, burning as he goes.

The news is worse than Catelyn imagined. She asks Robb if he plans to await Lord Tywin’s army at Moat Cailin, but Robb says that no one thinks that Tywin will be stupid enough to come that far; instead he will take the castles of the river lords one by one. Robb believes that they should march south to meet him. Catelyn questions the idea of leaving their strong position at Moat Cailin, fearing that her son has no chance against seasoned battle commanders like Tywin and Jaime Lannister. Robb explains that his supplies are running low and that an army the size of his cannot live off this land forever; now that Lord Manderly’s force has arrived, they need to march. Catelyn realizes the truth in what Robb says, remembering that Robb’s is not a standing army, but a levy of fishermen and farmers that will not stay cohesive if left idle.

Declaring that marching is all well and good, Catelyn asks Robb where he plans on marching to. Again Robb is uncertain; the Greatjon believes they should take the battle to Lord Tywin, while others think they should join with Ser Edmure Tully to defend Riverrun. Catelyn tells her son that, since he appointed himself battle commander, he must command; he cannot appear indecisive in front of his lords.

Catelyn asks Robb again what he intends to do. He declares that both plans have their merits, but he does not think a commander as experienced as Lord Tywin will be easily surprised and his forces are too strong to defeat easily. Robb decides to have his infantry continue down the Kingsroad but to send his horse across the Green Fork and then south to relieve Riverrun. This will put the river between his two forces but also between Tywin and Jaime. However, the only available crossing of the Green Fork is at the Twins, which is controlled by House Frey. Although a bannerman to House Tully, Lord Walder Frey has never been the most loyal; all Catelyn can think of is that the “Late” Lord Frey failed to arrive at the Battle of the Trident until after the battle was done. She tells Robb that her father has never trusted Lord Walder and that he should not either.

Catelyn, impressed by Robb’s plan, asks who will command each force. Robb informs her of his plan to lead the mounted force to Riverrun himself, while command of his main army of foot soldiers moving south to intercept Lord Tywin will be given to the Greatjon. In an attempt to show Robb his error, Catelyn points out that his father considered the Greatjon one of his most fearless men, but that his father is not fearless; he is brave, but that is different. Robb reconsiders and decides he needs a man of caution and cold cunning to lead the main force. Robb realizes that he should put Roose Bolton, whose cold cunning scares even him, in command; hopefully Bolton will scare Lord Tywin as well.

Robb states that he wants Catelyn to return to Winterfell. She insists that her father is dying and her brother is surrounded by foes; her place is with them at Riverrun.