Ned is visited in the black cells by Varys, who brings him news. He urges Ned to admit to treason, command Robb to lay down his sword, and denounce Stannis and Renly. When Eddard states that his life is not worth forsaking his honor, Varys tells him that Cersei has Sansa, whose life is also at stake.

Ned’s cell contains nothing but straw that stinks of urine. There are no windows, so the darkness is absolute. Ned thinks back to Robert’s words, “The king eats and the Hand takes the shit,” and thinks, “The king dies, and the Hand is buried.” The cell is deeper under the Red Keep than Ned dares imagine. He remembers the story of Maegor the Cruel murdering the masons to keep the castle’s secrets. He also remembers Cersei’s words, “When you play the game of thrones, you win or you die,” and he knows that he has played and lost. He wants to weep, but he is still a Stark of Winterfell and his grief and rage freeze inside him.

As his injured leg throbs, Ned damns them all, but can only blame himself; he was a fool. To keep himself sane, he thinks and plans aloud. Stannis and Renly Baratheon are likely gathering armies at Dragonstone and Storm's End. Catelyn will raise the North and the armies of River and Vale will join her.

As time drags on, Ned finds himself thinking more and more of Robert Baratheon as he was in the flower of his youth. In the darkness of his cell he can hear Robert ask him, “Gods, how are we come to this? You here, and me killed by a pig.” Ned broods on how he failed Robert by hiding the truth and letting them kill him. When Ned is half asleep, a jailer arrives with water, which he drinks eagerly. He asks the jailer for news but is ignored. 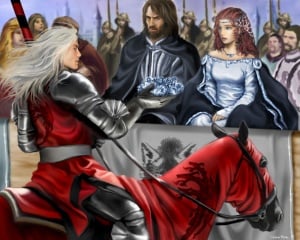 The moment when all the smiles died - by M.Luisa Giliberti©

As his solitude grows, Ned vividly remembers when he was eighteen at the Tourney at Harrenhal. He remembers Brandon’s laughter, Robert’s valor in the melee, Jaime Lannister joining the Kingsguard, and Rhaegar Targaryen defeating Ser Barristan Selmy in the final joust. Then Ned remembers the moment when all the smiles died, as Rhaegar rode past his own wife to lay the queen of beauty’s laurel in Lyanna’s lap. It was a crown of winter roses, which Lyanna loved the scent of. In his delirium, Eddard grasps the laurel, but there are thorns underneath and blood trickles down his fingers. Then he remembers his promise to Lyanna again, and weeps that he is going mad.

The jailer continues to come with a jug of water each day, but no food, and eventually Ned no longer asks questions. He is sure that Cersei will not kill him as long as Catelyn holds the Imp.

A new jailer arrives with wine instead of water. The voice that tells him to drink is familiar; it is Varys in a very effective disguise. Varys tells him that Arya escaped (which is for the best since Joffrey has no love for her), and that Sansa is still betrothed to Joffrey and kept close by the queen. Sansa pleaded for his life in court a few days previous. Ned reminds Varys that Cersei will not kill him because Catelyn holds her brother. Varys replies that Tyrion is the wrong brother. Besides, Catelyn has let Tyrion escape and he is probably now dead in the Mountains of the Moon.

Ned accuses Varys of standing by while his guards were slaughtered; Varys makes no apologies since he was unarmed, unarmored, and surrounded by Lannister soldiers. Varys continues by telling Ned that he plays his part: a courageous informer would be as useless as a cowardly knight. Ned asks if Varys will free him, but Varys points out that he would be the prime suspect. When asked if he will deliver a message, Varys admits that he will read it and then decide if it serves his purpose first. When asked his purpose, Varys states that it is peace.

Varys tells Ned that he struggled to keep Robert alive and protected him from his enemies for fifteen years, but could not protect him from his friends. Then Varys asks what madness led Ned to tell the queen he knew the truth of Joffrey’s birth. Ned says it was the madness of mercy; he had hoped to save the children’s lives. Varys remarks that he often forgets that Ned is one of the few honest men in the world, but when he sees the reward Ned has earned he understands why.

Ned then asks if Varys questioned Lancel Lannister about the wine. Varys explains that Cersei gave Lancel the wineskins and told him it was the king’s favorite vintage. In any case, if it had not been the boar, it would have been some other form of accident because Cersei needed to be rid of Robert to deal with his brothers: Stannis the iron gauntlet and Renly the silk glove. Varys then points out that Ned should have taken Littlefinger’s advice and supported Joffrey. Ned is shocked that Varys knows about the offer.

Varys then informs Ned that the queen will visit him the next day. She is frightened of him, but fears other enemies more: Jaime Lannister fights the river lords, Lysa Arryn is no friend, the Martells lust for vengeance for the murdered Elia and her babes, and Robb Stark marches down the Neck. Robb may only be a boy, but he is a boy with an army. Then there is Stannis who has a true claim to the throne, is a skilled military tactician, and is utterly without mercy. Most of all, Cersei fears that while her father battles the Starks and their allies, Stannis will descend on King's Landing, kill her and her children, and proclaim himself king.

However, Varys explains, Cersei knows “a tame wolf is more use than a dead one,” but telling her Stannis is the true heir will only lose Ned his head. Ned asks if he is expected to serve the woman who killed his king and crippled his son. Varys replies that he expects Ned to serve the realm: admit his treason, command Robb to lay down his sword, denounce Stannis and Renly, and carry Cersei’s secret to the grave. Cersei knows Ned is a man of honor and will let him join his brother and his bastard son in the Night's Watch. The thought of Jon brings shame and deep sorrow to Ned.

Ned accuses Varys of being Littlefinger’s man, but Varys denies it, saying Littlefinger is the second most devious man in the kingdom. Varys only feeds him choice whispers so that Littlefinger thinks he is his, just like the queen. Ned agrees that sounds just like Varys and asks whom the eunuch truly serves. Varys replies that he serves the realm, and the realm needs peace.

When Varys asks what his answer will be, Ned says his life is not as precious as his honor. Varys points out that neither he nor the queen has forgotten about Sansa. Caught off-guard by this, Ned begs Varys to leave Sansa out of his schemes, insisting his daughter is just a child. Varys notes that Rhaenys Targaryen was also a child when the Lannisters broke down her door. As he leaves he tells Ned that the next visitor can bring him either food and milk of the poppy or Sansa’s head. The choice, Varys says, is up to Ned.