Robb Stark has managed to lead his host to Riverrun without detection. Now Catelyn waits with her guards as her son leads his host to ambush Ser Jaime Lannister. Once the battle is over, Robb returns with Jaime as a captive. However, the death of several of Robb's party mars the sweetness of the victory.

Catelyn is protected by thirty men under the command of Hallis Mollen, Winterfell's captain of the guard, as Robb’s host waits to descend upon Ser Jaime Lannister in the Whispering Wood. Robb had wanted to leave her fifty guards and Catelyn had only wanted ten, so neither of them left happy.

Robb’s army rode hard from the Twins to catch Jaime by surprise. Along the way, they were joined by the Mallisters and some of the forces scattered after Edmure’s defeat, but Ser Jaime Lannister still outnumbers them three to one. However, in order to besiege Riverrun the Lannisters were forced to separate their twelve thousand foot and two or three thousand horse into three camps separated by rivers, which leaves them vulnerable. In addition, Catelyn’s uncle, Ser Brynden, led a screening force of three hundred picked men to kill the few outriders that Jaime bothered to post, allowing their advance to remain secret.

Before they face the siege, however, Robb and his men have concocted an elaborate trap. Unable to endure the boredom of a siege, Jaime has personally ridden out three times to chase raiders. To exploit this, Robb sent a few hundred men with Tully banners to lure Jaime and his men into an ambush in the narrow valley of the Whispering Wood.

As she waits, Catelyn realizes that she is again waiting for a man who has promised to return from war, as she has done all her life. First, she waited for her father when she was young. Then it was for Brandon Stark, who never came back. Then she waited for Ned Stark, who left a fortnight after he married her to fight in Robert's Rebellion. At least Ned left her pregnant with Robb, whom she must wait for now.

Robb shows no fear as the battle approaches, but Catelyn still fears for the life of her son, remembering him as a babe at her breast. As Robb’s squire Olyvar Frey helps with his shield and helm, Catelyn sees a tall young knight appear where her son had stood. Robb leaves her to let his men see him before the battle, as his father had once recommended, with his direwolf Grey Wind shadowing him. 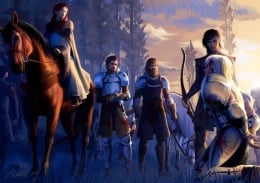 The Kingslayer is taken.

While she waits, Catelyn hears snow shrikes, which remind her of Winterfell. Suddenly, horns blow and arrows fly as the trap closes. Catelyn can initially see the moonlight on the lances, but soon she can only hear the sounds of the battle in the Whispering Wood. Eventually the sounds fade, and then Robb returns on a different horse with the blood of one of his bodyguards on his arm. They drag Jaime before Catelyn, and the captive declares that he would offer up his sword, but he seems to have mislaid it. Catelyn asks Jaime to return her husband and daughters, but he replies that he seems to have mislaid them as well.

Theon Greyjoy calls for Jaime's head but Robb considers the Kingslayer more valuable alive and, like his father Ned, refuses to condone the murder of prisoners. Robb orders Jaime taken away with a strong guard in part to protect him from Lord Rickard Karstark, who will want vengeance for his sons Torrhen and Eddard along with Daryn Hornwood. Catelyn then learns that when Jaime saw he was lost, he charged Robb’s party, hoping to cut down Robb. Robb states that he would be dead if not for Lord Karstark’s sons and the others.

Despite these losses, the battle is a resounding victory for Robb. They have taken close to a hundred knights and a dozen lords bannermen captive. Catelyn points out that they have only won one battle, not the war. Although they took the leader, most of the Lannister host is still besieging Riverrun, and they still have to deal with Lord Tywin Lannister. Robb agrees that Catelyn is right, and declares that they still have the siege of Riverrun to defeat.