Daenerys has terrible nightmares during her long recovery. She wakes to learn that her child was born dead, a twisted monstrosity. When she visits with Drogo he is comatose, but Mirri Maz Duur insist that he is alive. Daenerys is horrified by the cost of the bloodmagic. That night, she attempts to revive Drogo, but by morning knows he is gone forever and smothers him with a pillow.

In her dreams, Daenerys keeps hearing, “You do not want to wake the dragon, do you?” She is walking down a hall, her bare feet leaving bloody footprints. Suddenly she is with Drogo under the open sky of the Dothraki Sea. Drogo is stroking her, waking her passion, and when he enters her the stars are gone, great wings fill the sky, and the world takes flame. Then she sees Ser Jorah’s drawn and sorrowful face telling her that the last dragon was Rhaegar Targaryen while standing over a hot brazier containing red-hot stone eggs. In turn, he is replaced by Viserys with his molten gold crown screaming “The dragon does not beg, slut,” and “I will be crowned.” Then he painfully pinches her nipples and suddenly Daenerys is frantically running to a distant red door that is her salvation. She knows that the darkness is there, but she does not dare look back or she will be lost. She sees her son as a grown warrior, proud and tall, before flames consume him. Then the ghosts of kings are lining the hallway urging her to go faster. Then she is flying over the Dothraki Sea, and all are fleeing before her. She finally throws open the red door to see her brother Rhaegar, the last dragon, in his armor, but when she opens his visor she sees her own face.

Daenerys wakes to the taste of ashes, with Jhiqui standing over her. Her body hurts very much. She calls for something, but does not know what. Jhiqui says “Yes,” and bolts from the tent shouting. When they return, Daenerys is crawling toward her dragon eggs. Ser Jorah carries her back to bed and tells her to sleep and then Mirri Maz Duur gives her something in a cup. A dreamless sleep takes her.

It is dark when Daenerys wakes again. She calls for her handmaidens and they attend to her. They tell her that she has been sick for a long time. Then Mirri Maz Duur gives her wine and as she falls asleep, asking for a dragon’s egg. The next time she wakes, Daenerys has the pale dragon’s egg in her arms and it is warm. There is fine sheen of perspiration on her that she names “dragon’s dew.” There is no fever and she feels strong. She calls for her handmaidens and asks for a bath, Mirri Maz Duur, Ser Jorah, Drogo, and her child. Her handmaids avoid answering about Drogo and her child, and Daenerys knows that her child is dead.

Mirri Maz Duur and Ser Jorah enter to find Daenerys standing over the other eggs, which are all warm. However, when asked, Ser Jorah does not feel the heat from the eggs. Ser Jorah looks gaunt and limps from his wounds. He tells Daenerys that her son never lived, but Mirri Maz Duur tells her that the child was monstrous: lizard-like, with scales; his skin fell off, revealing a body filled with grave worms and the stink of corruption, as if he had been dead for years. She states that her son was strong when Ser Jorah brought her into the tent. Mirri Maz Duur explains that death was in the tent and that the shadows touched her.

Daenerys realizes that Ser Jorah killed her child by taking her into the tent, for love and loyalty to her. Daenerys states that she thought the life of the horse would be payment enough and is told that was a lie she told herself. Daenerys is not sure if she knew. Daenerys realizes that the life of the horse, her son, Quaro, Qotho, Haggo, and Cohollo paid for the life of Drogo. She asks to see what the price bought. Ser Jorah cannot dissuade her and has to help her stand since she is weaker than she thought.

Outside, in the glaring sun, Daenerys can see there is little left: a scattering of tents, a few score of horses, and perhaps a hundred people. They are the old, the frightened, and the sick. Jhogo reminds her that a khal who cannot ride is no khal. She learns that Ko Pono declared himself khal first, and Jhaqo after him. They took most of the riders, the herds, and the slaves because Daenerys’ own khas was too weak to stop them; it is the right of the strong to take from the weak. Most of the rest left during the following nights. Mago, now a bloodrider to Khal Jhaqo, seized Eroeh (whom Daenerys had denied him) and raped and murdered her. Daenerys repeats her mantra, “If I look back I am lost,” and swears that Mago and Jhaqo will die screaming. Irri warns her that Jhaqo now has 20,000 riders, but Daenerys insists that she is the blood of the dragon. Then she asks to see Drogo.

Drogo lies unmoving, unseeing, and covered in bloodflies. Daenerys asks why he is outside alone and Ser Jorah explains that he seems to like the warmth and staring at the sun with eyes that cannot see. He will follow where led and eat if food is put in his mouth, but otherwise does nothing. Daenerys faces Mirri Maz Duur, who insists that Drogo is alive. Daenerys responds that such is not life for a man that was as alive as Drogo. Then Daenerys asks Mirri Maz Duur when Drogo will be as he was. The maegi replies,

“When the sun rises in the west and sets in the east. When the seas go dry and mountains blow in the wind like leaves. When your womb quickens again, and you bear a living child. Then he will return, and not before.” 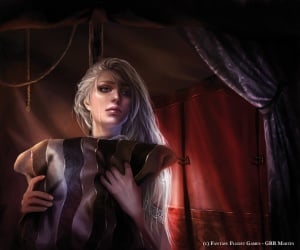 Daenerys sends the others away and then accuses Mirri Maz Duur of knowing, of cheating her and murdering her child. Mirri Maz Duur replies that it was wrong of the khalasar to burn her temple, and now the Stallion Who Mounts the World will burn no cities and trample no nations. Daenerys reminds the maegi that she saved her, but Mirri Maz Duur asks what Daenerys saved when three warriors had already raped her, burned her home and her temple, and cut off the heads of her neighbors and friends. Daenerys insists that she saved her life, but the maegi tells her to look at her khal and see what life is worth when all else is gone. Daenerys orders her men to bind Mirri Maz Duur and take her away; the woman only smiles at her.

Daenerys orders Drogo brought into her tent. She bathes him herself and washes his hair until darkness falls. She thinks of their first ride beneath the open sky and of when they made Rhaego. She is too raw from the miscarriage for intercourse, but uses other means in an attempt to use the magic of love to bring Drogo back. It does not work and her husband remains comatose. When dawn breaks, Daenerys kisses Drogo for the last time, and then smothers him with a soft silk pillow.