Catelyn returns to Riverrun for the first time in many years. After meeting with her ailing father, she seeks out Robb in the godswood. After praying with his bannermen, Robb calls a council to determine their next move. The council argues for hours about which way to march and which king to support until Greatjon Umber gives a rousing speech and the bannermen proclaim Robb the King in the North. 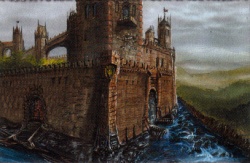 To Catelyn, it seems a thousand years since she left Riverrun by boat with an infant Robb to head north to Winterfell for the first time. Now she is returning by boat across the same river with a son who wears plate and mail instead of swaddling clothes. With them in the boat is Theon Greyjoy, and in the boat following are Brynden Tully, Greatjon Umber, and Rickard Karstark.

As they draw near, the men on the walls cheer them as the banners of House Tully fly from every rampart, but Catelyn cannot feel anything but sadness since she received news of her husband’s death, and she wonders if her heart will ever lift again. After passing under the wall through the wide Water Gate, they are greeted on the water stair by Catelyn’s brother Ser Edmure Tully and Lord Tytos Blackwood. A worn-looking Edmure embraces Catelyn, expresses his condolences, and promises vengeance against the Lannisters. Catelyn only says that it will not bring Ned back, then states she has to see her father.

She is escorted to her father’s solar in the keep, which is three-sided like Riverrun itself. Along the way, Catelyn asks about her father, and--as expected--Edmure explains that he is dying. When Catelyn demands to know why she was not notified, Edmure explains that with the Seven Kingdoms so volatile their father forbid it; if word had gotten out that he was ailing, the Lannisters might have attacked. Catelyn immediately blames herself, remembering it was she who sparked the war by arresting Tyrion Lannister.

The solar is also triangular with a balcony to the east from which the walls, battlements, and river fork can be seen. Lord Hoster’s bed has been moved onto the balcony so he can sit in the sun and watch the rivers. He is shrunken, looking much older and frailer than Catelyn remembers. Lord Hoster calls her “Little Cat” and tells how he wanted to be awake when she arrived; he was afraid he would not wake again. He speaks weakly and is wracked by spasms of pain. He defends his decision to keep news of his illness a secret, but admits that he was afraid he would die before seeing her again, especially once the siege began. She tells him that Robb is here, they have Jaime Lannister in irons, and Riverrun is free again. This leads Lord Hoster to tell her of the joy he had as he watched the battle from the battlements.

Her father asks if it was Robb who won the battle and Catelyn tells him that it was. Then she mentions that Ser Brynden was also an important figure. Lord Hoster seems surprised by the mention of the Blackfish and asks if Lysa has come down from the Vale as well. Catelyn cannot lie and explains that Lysa is frightened and believes she and her son are only safe in the Eyrie. Hoster is very disappointed that he will not see her.

Lord Hoster agrees to see Robb, who he remembers has his Tully eyes. When Catelyn presses on to ask if he will see his brother, her father asks if Ser Brynden has married anyone yet. Catelyn is saddened that her father cannot allow the old feud to rest. She tells him that his brother has not wed, nor will he ever. Lord Hoster launches into a weak rant, criticizing Brynden’s choice to defy him and never marry, saying that Bethany Redwyne is still waiting for Brynden. Catelyn has to remind her father that Bethany Redwyne has long ago married Lord Mathis Rowan and has three children. Her father states there were also offers from others, including Lord Jonos Bracken’s daughter or any of three by Walder Frey. Catelyn tells how she would not have made it to Riverrun without Brynden, and her father agrees that he was always a warrior. Lord Hoster agrees to see his brother later but he is too tired to fight now. Hoster is asleep before Catelyn leaves the solar.

Brynden is talking with the Riverrun guards when Catelyn returns, but he anxiously asks about his brother, and Catelyn confirms that he is dying. When Brynden asks if Hoster will see him, Catelyn conveys that he will but he is too tired to fight. Ser Brynden only laughs that his brother will be chiding him about the Redwyne girl as they light his funeral pyre. Catelyn smiles and asks where she can find Robb.

In the halls Catelyn finds Theon regaling the garrison an account of the battle and of how Grey Wind tore off a man’s arm and drove the Lannister horses mad. When asked, Theon tells her that he believes Robb went to the godswood. She realizes that this is just what Eddard would do after a battle.

Catelyn finds Robb praying with those of his lords bannermen who hold to the old gods, including the Greatjon, Rickard Karstark, Maege Mormont, Galbart Glover, and Lord Tytos Blackwood (one of a very few followers of the old gods south of the Neck). She feels she should not disturb their prayers. As she walks through the godswood, memories of her childhood beset Catelyn. Here her father taught her to ride, there Edmure fell and broke his arm, and under that bower she and Lysa played at kissing with Petyr Baelish and he tried to tongue them with mint from the godswood on his breath. As Robb rises from his prayers, Catelyn wonders if Robb--who has ridden into battle and killed men with a sword--has ever been kissed in the godswood.

When he sees her, Robb declares that they must call a council. Catelyn tries to get him to see his very sick grandfather, but Robb insists that first they must meet to discuss the news that Renly Baratheon has proclaimed himself king. Catelyn says she had expected it to be Lord Stannis and Galbart Glover says they all did.

The lords argue late into the night with every lord taking full advantage of his right to speak. Roose Bolton has reformed their other host at the mouth of the causeway. Lord Tywin Lannister has crossed the Trident and is making for Harrenhal. Some lords favor marching east to meet Lord Tywin at Harrenhal. Marq Piper favors marching west to Casterly Rock. Jason Mallister suggests they simply stay athwart Lord Tywin’s supply lines and rest their troops. Jonos Bracken proposes they pledge fealty to Renly and move south to join him.

Robb, speaking for the first time, insists that Renly is not the king. The lords protest that Robb cannot mean to hold to Joffrey, who executed his father. Robb insists that that makes Joffrey evil, but does not make Renly king; as the youngest brother, Renly cannot be king before Stannis. That splits the room again, with some favoring Stannis and some still favoring Renly who is crowned and has Highgarden and Storm's End to support him. Robb states he does not know what to do since Joffrey is the true heir, but he executed his father based on a lie. Ser Stevron Frey, old Walder Frey’s heir, suggests that they make peace and allow Renly and Joffrey to fight and oppose or submit to the winner as they choose; Lord Tywin would welcome the truce and the return of his son. This is met with shouts of outrage.

Catelyn suggests a peace. Robb reminds her that the Lannisters murdered her husband and that he will have no peace with them, laying his sword on the table to emphasize his point. Catelyn points out that the war was started to free Eddard and to protect the Riverlands. The Riverlands are now safe and no amount of vengeance will bring her husband back. She wants her daughters safe, for Robb to be safe and ruling from Winterfell, and to go home. Ser Brynden questions what the terms of peace could be that would prevent another war in the near future. Rickard Karstark and Jonos Bracken question what their sacrifices have been worth if peace is made now. Tytos Blackwood notes that if they make peace with King Joffrey, are they not traitors to King Renly? Catelyn’s hopes of peace shatter before her eyes.

The meeting breaks down into another argument of which king to support, until the Greatjon rises to his feet and silences them all. He spits upon all the kings and declares that Renly and Stannis are nothing to him. He asks why they should rule over him and his from some flowery seat in the south when they know nothing about the North. Even their gods are wrong. The Greatjon asks why they should not rule themselves again. It was the dragons they submitted to and the dragons are all dead. Then the immense man points his two-handed greatsword at Robb and proclaims:

There sits the only king I mean to bend my knee to, m’lords. The King in the North!

The other bannermen all take up the call, even the river lords who have never been ruled from Winterfell. And for the first time in 300 years, there is a King in the North.