Daenerys builds a funeral pyre for Drogo and places her dragon eggs among his treasures. When she attempts to take control of the few remaining Dothraki as a khal would, she is refused. As night falls, Daenerys lights the pyre and is drawn by instinct deep into the inferno. When the pyre dies, the others find her unburnt and nursing the first three baby dragons in hundreds of years.

Daenerys and her khas build a funeral pyre for Khal Drogo, as is Dothraki custom. There is little wood in the land so much of what they find is gnarled. They lay the logs in a square and fill the center with brush, grass, and bark shavings. Aggo and Rakharo kill a stallion from their now meager herd so that Drogo might have a mount in the afterlife; it is nowhere near as fine as Drogo’s red, but there are few in the world that are. Mirri Maz Duur believes that Daenerys is attempting to use bloodmagic to resurrect her khal and insists that without the proper spells the blood is nothing. The maegi even goes so far as to offer assistance in exchange for being released from her bonds, but Daenerys orders her silenced. On the platform they pile Drogo's treasures, but Daenerys does not let the weapons she received as bride gifts be added, insisting they are hers.

Ser Jorah is wary of her intentions, and pleads with her to let Drogo go and come with him to see the wonders of the east. Daenerys assures him that she does not plan to sacrifice herself on her husband’s pyre. When Ser Jorah calls her “princess”, Daenerys insists that he call her “queen”; her brother, the king, is dead and everything that was his is now hers.

Once the pyre is completed, Daenerys gathers her people together, now fewer than a hundred, and declares that they will be her khalasar. Among the crowd, she sees slaves and declares them free. She announces that any among them are free to go, but that if they stay they shall always have an honored place among her khalasar.

Daenerys turns to the three young warriors of her khas and gives each of them one of her bride gifts, naming them ko and asking for their oaths as her bloodriders: to Jhogo she gives the silver-handled whip, to Aggo the double-curved black dragonbone bow, and to Rakharo the gold-chased arakh. However, none of them are willing to take the oath: Jhogo replies that this is not done and it would shame him to be a woman's bloodrider, Aggo states that only a man can lead a khalasar and name a ko, and Rakharo only promises to take her to Vaes Dothrak to join the dosh khaleen. Daenerys ignores the refusals. Finally, Daenerys turns to Ser Jorah and promises him a fine Valyrian steel blade when she comes into her birthright. Ser Jorah swears his fealty and heart to her and Daenerys proclaims him the first of her Queensguard.

Daenerys returns to her tent, knowing the Dothraki think her mad and not sure that they are wrong. After a pleasingly steaming hot bath, she is dried and perfumed. Daenerys sends her handmaids away so that she might prepare Drogo for his final journey. She thinks about how few Dothraki men die with their hair uncut as she washes him, braids his hair with bells, and dresses him in fine clothes and the worn vest he liked most. She finally asks him to forgive her, and declares that she paid the price, but it was too high. She then dresses in fine clothes with a vest like Drogo’s. The sun is setting when she calls them back to bear Drogo to the pyre. 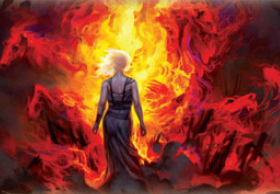 Daenerys orders oil poured over the pyre, and then orders her handmaidens to fetch her dragon eggs. Something in her voice makes them run. Ser Jorah protests that Drogo will have no need of dragon eggs, urging Daenerys to sell them and live as a wealthy woman for the rest of her days. Daenerys insists that the eggs were not given to her to sell. Daenerys climbs the pyre to place the black egg under Drogo's arm, near his heart, the green beside his head, and the cream-and-gold between his legs. Once the eggs are in place, Daenerys gives her love one last kiss. Climbing down, Daenerys notices Mirri Maz Duur watching her and hears the maegi call her mad. Daenerys only asks how far madness is from wisdom and commands that Mirri Maz Duur be bound to the funeral pyre by Rakharo and Ser Jorah, who hesitates and protests. The woman does not scream or plead as she is bound. As she pours the oil over the maegi’s head, Daenerys thanks her for all she has taught her. Mirri Maz Duur promises that Daenerys will not hear her scream. Daenerys insists that she will, but that she only wants the maegi’s life, echoing the woman’s own words: “Only death can pay for life.” This brings a flicker of what might be fear to maegi’s face for the first time. 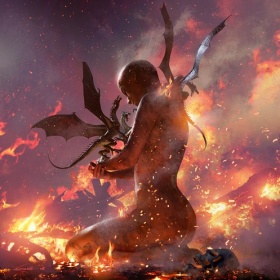 Daenerys the Unburnt, Mother of Dragons – by Michael Komarck©

They wait for night to fall. It is Jhogo that first notices the red comet, the first star of the evening. Daenerys sees this as a sign to light the pyre. Mirri Maz Duur sings in a high, ululating voice at first, but her voice becomes a wail as the flames engulf her and she soon falls silent. The Dothraki and Ser Jorah back away as the smoke grows thicker and the heat stronger, but Daenerys stands her ground; she is the blood of the dragon and undeterred by the fire. She knew the truth long ago, but the brazier was not hot enough. Then Daenerys begins to slowly walk towards the fire as sweat covers her body. She sees many images as she walks: trees, animals, and a great grey stallion. Seeing the horse she tells Drogo to mount, and for a second she sees him mounted. He smiles at her and cracks a whip made of flame down upon the pyre and Daenerys hears the crack of breaking stone as the pyre collapses, showering her with ash, cinders, and broken egg shell. Behind her, she can hear the Dothraki and Ser Jorah shouting. As the pyre begins to collapse completely, Daenerys hears two more cracks like the first and walks into the heart of the fire.

When the fire dies, Ser Jorah finds Daenerys, naked but alive and unburnt except for her hair, nursing two baby dragons, with a third draped across her shoulders. The dragons match the colors of their eggs: cream-and-gold, green-and-bronze, and black-and-scarlet. Ser Jorah drops to his knees wordlessly. He is followed by Jhogo, Aggo, and Rakharo who declare her blood of their blood, and then her handmaidens and the rest of the Dothraki do the same. Daenerys knows that they are now hers as they never were Drogo’s.

Daenerys rises and for the first time in hundreds of years, the night comes alive with the music of dragons.