JOFFREY BARATHEON, the First of His Name, a boy of thirteen years, the eldest son of King Robert I Baratheon and Queen Cersei of House Lannister,

The King in the North, The King of the Trident

The banner of the King in the North remains as it has for thousands of years, the grey direwolf of the Starks of Winterfell, running across an ice-white field.

STANNIS BARATHEON, the First of His Name, second son of Lord Steffon Baratheon and Lady Cassana of House Estermont, formerly Lord of Dragonstone,

King Stannis has taken for his banner the fiery heart of the Lord of Light, a red heart surrounded by orange flames upon a yellow field. Within the heart is the crowned stag of House Baratheon, in black.

DAENERYS TARGARYEN, the First of Her Name, Khaleesi of the Dothraki, called DAENERYS STORMBORN, the UNBURNT, MOTHER OF DRAGONS, sole surviving heir of Aerys II Targaryen, widow of Khal Drogo of the Dothraki,

The banner of Daenerys Targaryen is the banner of Aegon the Conqueror and the dynasty he established, a three-headed dragon, red on black.

BALON GREYJOY, the Ninth of His Name Since the Grey King, styling himself King of the Iron Islands and the North, King of Salt and Rock, Son of the Sea Wind, and Lord Reaper of Pyke,

The Arryns are descended from the Kings of Mountain and Vale, one of the oldest and purest lines of Andal nobility. House Arryn has taken no part in the War of the Five Kings, holding back its strength to protect the Vale of Arryn. The Arryn sigil is the moon-and-falcon, white, upon a sky-blue field. The Arryn words are As High As Honor.

ROBERT ARRYN, Lord of the Eyrie, Defender of the Vale, Warden of the East, a sickly boy of eight years, 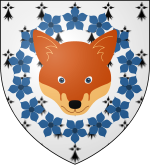 The Florents of Brightwater Keep are Tyrell bannermen, despite a superior claim to Highgarden by virtue of a blood tie to House Gardener, the old Kings of the Reach. At the outbreak of the War of the Five Kings, Lord Alester Florent followed the Tyrells in declaring for King Renly, but his brother Ser Axell chose King Stannis, whom he had served for years as castellan of Dragonstone. Their niece Selyse was and is King Stannis's queen. When Renly died at Storm's End, the Florents went over to Stannis with all their strength, the first of Renly's bannermen to do so. The sigil of House Florent shows a fox head in a circle of flowers. 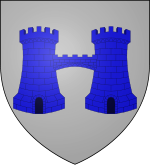 Powerful, wealthy, and numerous, the Freys are bannermen to House Tully, but they have not always been diligent in their duty. When Robert Baratheon met Rhaegar Targaryen on the Trident, the Freys did not arrive until the battle was done, and thereafter Lord Hoster Tully always called Lord Walder "the Late Lord Frey." It is also said of Walder Frey that he is the only lord in the Seven Kingdoms who could field an army out of his breeches.

At the onset of the War of the Five Kings, Robb Stark won Lord Walder's allegiance by pledging to wed one of his daughters or granddaughters. Two of Lord Walder's grandsons were sent to Winterfell to be fostered.

WALDER FREY, Lord of the Crossing,

The Lannisters of Casterly Rock remain the principal support of King Joffrey's claim to the Iron Throne. They boast of descent from Lann the Clever, the legendary trickster of the Age of Heroes. The gold of Casterly Rock and the Golden Tooth has made them the wealthiest of the Great Houses. The Lannister sigil is a golden lion upon a crimson field. Their words are Hear Me Roar!

TYWIN LANNISTER, Lord of Casterly Rock, Warden of the West, Shield of Lannisport, and Hand of the King,

Dorne was the last of the Seven Kingdoms to swear fealty to the Iron Throne. Blood, custom, and history all set the Dornishmen apart from the other kingdoms. At the outbreak of the War of the Five Kings, Dorne took no part. With the betrothal of Myrcella Baratheon to Prince Trystane, Sunspear declared its support for King Joffrey and called its banners. The Martell banner is a red sun pierced by a golden spear. Their words are Unbowed, Unbent, Unbroken.

Lord Edmyn Tully of Riverrun was one of the first of the river lords to swear fealty to Aegon the Conqueror. The victorious Aegon rewarded him by raising House Tully to dominion over all the lands of the Trident. The Tully sigil is a leaping trout, silver, on a field of rippling blue and red. The Tully words are Family, Duty, Honor.

The Tyrells rose to power as stewards to the Kings of the Reach, whose domain included the fertile plains of the southwest from the Dornish marches and Blackwater Rush to the shores of the Sunset Sea. Through the female line, they claim descent from Garth Greenhand, gardener king of the First Men, who wore a crown of vines and flowers and made the land bloom. When Mern IX, last king of House Gardener, was slain on the Field of Fire, his steward Harlen Tyrell surrendered Highgarden to Aegon the Conqueror. Aegon granted him the castle and dominion over the Reach. The Tyrell sigil is a golden rose on a grass-green field. Their words are Growing Strong.

Lord Mace Tyrell declared his support for Renly Baratheon at the onset of the War of the Five Kings, and gave him the hand of his daughter Margaery. Upon Renly's death, Highgarden made alliance with House Lannister, and Margaery was betrothed to King Joffrey.

MACE TYRELL, Lord of Highgarden, Warden of the South, Defender of the Marches, and High Marshal of the Reach,

The sworn brothers of the Night's Watch

The Brotherhood Without Banners, an outlaw fellowship

CRASTER, of Craster's Keep, who kneels to none,