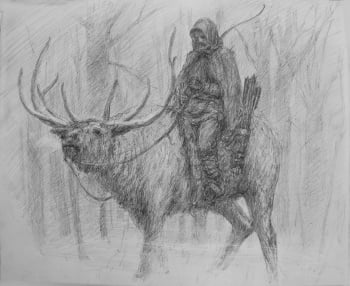 Coldhands astride his great elk - Art by Marc Fishman ©

Sam and Gilly have reached what appears to be Whitetree. When Sam studies the carved face of the Heart Tree for a moment, he admits to himself that it is not the face he and his brothers saw when they started out on the ranging. Nor does he remember its red eyes weeping blood (sap). Sam prays earnestly to the old gods to protect them. He and Gilly camp in one of the wildling huts for the night, but Sam is woken by shapes moving within. The corpse of Small Paul comes after Sam, and he tries to stab it with the obsidian dagger, but it shatters upon contact with Paul’s chainmail. Despairing, Sam thrusts a burning stick from the campfire in the wight’s mouth, setting it on fire. Outside the hut, the wights begin to surround Gilly and her infant son after killing their horse. Thinking all is lost, a raven lands on Sam’s shoulder, and suddenly thousands of ravens fly from the branches of the weirwood tree to tear the wights to pieces. The raven perching on Sam's shoulder speaks, telling him to go, and he and Gilly begin to run south, but without their horse they fear they'll be overtaken by wights. Suddenly a voice calls out, "Brother! Here." From the falling snow appears a man dressed all in black astride a great elk. When Sam reaches up for the man’s bare hand, Sam notices his hand is black and cold as ice.