Sansa Stark has supper with Margaery Tyrell and her grandmother, Olenna Tyrell. 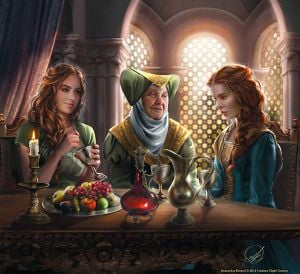 Sansa is invited to supper by Margaery and her grandmother, the Lady Olenna. She is escorted to the party by Loras, and unknowingly upsets him by talking of Renly's death. The party is held in the Maidenvault, where King Baelor the Blessed confined his sisters so they would not tempt him, as he had sworn a vow of celibacy. She is introduced to all of Margaery's cousins and companions, but it is the Queen of Thorns who takes the most interest in Sansa.

Lady Olenna reveals that the Baratheons have Targaryen blood, and that the Tyrell claim to Highgarden has always been shaky since several other houses in the Reach can claim descent from Garth Greenhand as well. The old woman makes it known that her son is an oaf for making this alliance with the Lannisters, and she wishes to learn from Sansa the truth of what Joffrey is. Sansa fears that Varys is listening, but Lady Olenna commands Butterbumps to sing at the top of his voice. Sansa reveals the truth about Joffrey to the Queen of Thorns and Margaery, telling them that the King is a monster and that she fears for Margaery. Lady Olenna assures Sansa that the wedding will still go on, as Mace is determined that his daughter wed the King. The Queen of Thorns offers Sansa a proposal to visit Highgarden after the wedding, and wishes Sansa to marry her grandson Willas.