Ser Addam Marbrand is a knight of House Marbrand and the son and heir of Lord Damon Marbrand of Ashemark. He is one of the chief knights in the service of Tywin Lannister, Lord of Casterly Rock.[3]

Gallant[7] and charming,[8] Addam is an excellent horseman and swordfighter.[7] He is described as a daring commander[7] whom others would willingly follow into battle.[9] Addam is a trusted friend of Ser Jaime Lannister of the Kingsguard.[10]

Addam wears burnished bronzed armor, and the burning tree of the Marbrands is etched upon his breastplate.[5] Addam rides a spirited red courser barded with bronze-colored trappings emblazoned with the burning tree.[7] He owns cloaks of bronze[7] and smoke grey.[11]

During his youth, Addam was a page at Casterly Rock and a childhood friend of Ser Jaime Lannister.[12] 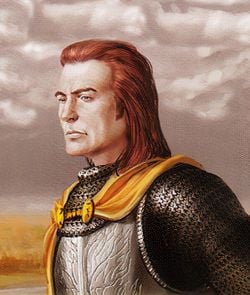 When Tyrion Lannister is taken captive by Catelyn Stark, his father, Lord Tywin Lannister, calls his banners and raids the riverlands. Commanding Tywin's outriders,[13] Addam reports that Catelyn's son, Robb Stark, is marching a northern host down the causeway. Tywin orders Addam to withdraw and harass the opposing force's flanks while he marches the Lannister host north to engage them.[1] Addam's scouts raid the area around the Twins and skirmish against the soldiers of House Frey in the opening weeks of war. Catelyn tasks her uncle, Ser Brynden Tully, with preventing Addam's men from learning that Robb is splitting his forces at the Twins.[13]

When Addam commands Tywin's right wing at the battle on the Green Fork, his force numbers four thousand mounted men and three quarters of Tywin's knights, amongst them Ser Flement Brax and men from Crakehall and Cornfield.[5] Following their victory, Addam reports to Tywin the capture of Lord Medger Cerwyn, Ser Wylis Manderly, Harrion Karstark, and four Freys, and the death of Lord Halys Hornwood. The captives admit Robb crossed at the Twins with the majority of his cavalry to retake Riverrun.[5]

Tywin holds a council following the defeats of the Whispering Wood and the Camps. Addam counsels against seeking a truce and advises marching on the Stark host. Tywin orders his host to Harrenhal, dispatching Addam's outriders to screen their movements. When Tywin makes Tyrion the acting Hand of the King, Addam is among the alternatives that Tyrion suggests.[14]

Addam is the first to depart when Tywin's forces leave Harrenhal during the War of the Five Kings, a day ahead of his liege lord. Well-liked by the women of the castle, Addam is considered by Weese to be Tywin's most daring commander.[7] He rides west to join Tywin in an attempt to cross the Red Fork but is thrown back three times at the Battle of the Fords.[15] His crossing prevented, Tywin turns his forces south to King's Landing when he receives word of an imminent attack by Stannis Baratheon. Addam distinguishes himself defending the city at the ensuing Battle of the Blackwater and is recognized by King Joffrey I Baratheon.[6]

After the Blackwater, Addam is made Commander of the City Watch of King's Landing by Tywin. Tyrion considers him a shrewd choice despite being an outsider because he is a natural leader. Addam receives an ornate black breastplate and a cloth-of-gold cloak.[9]

Addam is concerned about paying the forty-four hundred gold cloaks, but he is not allowed to dismiss any by order of Queen Cersei Lannister. Tywin is also angry that Addam has not been able to find the missing squire Tyrek Lannister, lost in the riot of King's Landing.[9] He later discovers crystals from the crown of the High Septon, who was killed during the riots. When deserters from the Blackwater return to the barracks, Tywin orders Addam to break their knees to prevent them running again and leave them as beggars as a reminder to others.[16]

Addam attends the wedding of Sansa Stark and Tyrion Lannister,[17] and he is part of the group that accompanies Tyrion to meet the delegation from Dorne to add more political weight to the Lannister party.[2] He gives Joffrey a pair of silver spurs before his royal wedding to Margaery Tyrell and he cautions the king to be careful with his new Valyrian steel blade, Widow's Wail.[18] Addam provides a guard for the couple after they are wed at the Great Sept of Baelor. The knight plans to deliver a toast during their wedding feast in the Red Keep but Joffrey dies choking before he can do so.[19]

Addam's men take Tyrion, his squire Podrick Payne, and Sansa's maids into custody on suspicion of poisoning Joffrey. He is assigned to search for the missing Sansa and is responsible for guarding Tyrion while he is brought to trial. Tywin did not send the Kingsguard because the majority of them will testify against Tyrion and he did not think it proper.[20] Addam escorts Tyrion again on the final day of his trial when Tyrion demands trial by combat.[21]

When Ser Jaime Lannister returns to King's Landing, he asks Addam to help him practice fighting with his left hand, as Vargo Hoat had Zollo cut off Jaime's sword hand.[22] He selects Addam because of their history and hopes that he can trust him not to reveal his weakness with a sword. Addam bests Jaime easily, disarming him three times and leaving him battered and bruised.[12]

Ser Addam and the City Watch stand guard during the funeral of Tywin Lannister after his death at the hands of his son Tyrion. Trying to discover how Tyrion escaped, Addam and Jaime link him to Rugen, a missing gaoler,[23] but Addam cannot find him in the brothels along the Street of Silk.[24] Jaime tasks Addam with organizing the guarding and tasting of King Tommen I Baratheon's food.[25] When Ser Kevan Lannister plans to leave King's Landing to hunt outlaws in the riverlands, Jaime unsuccessfully suggests that Kevan send Addam in his place and remain as the Hand of the King.[26] When Jaime is ordered by the Queen Regent, his sister Cersei, to retrieve prisoners at Harrenhal and resolve the siege of Riverrun, he insists he be accompanied by Addam and Ser Ilyn Payne. Addam is happy to leave the gold cloaks and again command the outriders.[11]

While dining at Hayford, Addam reports his inability to find Tyrek Lannister, the Lord of Hayford by marriage to the infant Lady Ermesande Hayford. Jaime replaces Addam with Ilyn as a sparring partner, preferring the tongueless King's Justice, but Addam does not reveal his friend's secret to others. The outriders are troubled by wolves and one of Addam's men has his horse run off and killed by a pack.[11] At Darry, Ser Danwell Frey reports that wolves attacked his baggage train on his way south from the Twins and Addam commiserates. Addam charms the woman seated next to him during the feast there. When talk turns to the hanging of Merrett Frey at the hands of outlaws, Addam repeats the rumor that Lord Beric Dondarrion heads a group of outlaws and cannot be killed.[8]

When Jaime's group arrives at Riverrun, Ser Daven Lannister reports several foraging parties have gone missing. Jaime tasks Addam with inspecting the perimeter of their camp.[27] During Jaime's unsuccessful parley with Ser Brynden Tully, Brynden the Blackfish insults Jaime as a cripple and suggests that he name Addam as a champion in his place. Participating in Jaime's war council, Addam offers to lead a night raid. Jaime instead negotiates with the captive Lord Edmure Tully.[28]

After the Blackfish's escape from Riverrun, Addam commands the search to the south of the Red Fork of the Trident.[29]

Harys: How could it happen? Ser Jaime taken, the siege broken ... this is a catastrophe!
Addam: I am sure we are all grateful to you for pointing out the obvious, Ser Harys.[14]

Two battles do not make a war. We are far from lost. I should welcome the chance to try my own steel against this Stark boy.[14]

Addam: Storming the walls will be a bloody business. I propose we wait for a moonless night and send a dozen picked men across the river in a boat with muffled oars. They can scale the walls with ropes and grapnels, and open the gates from the inside. I will lead them, if the council wishes.
Walder: Folly. Ser Brynden is no man to be cozened by such tricks.[28]

Ser Addam Marbrand was a shrewd choice. Like Jaime, he was the sort of man other men liked to follow.[9]

Another good man who thinks me a kinslayer.[21]

Addam Marbrand on the Game of Thrones wiki.