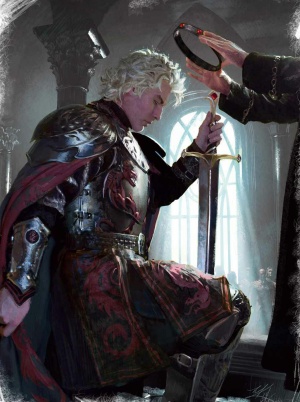 Aegon crowned by the High Septon, by Michael Komarck in The World of Ice & Fire

Aegon's coronations refers to the two coronations of Aegon the Conqueror during his Conquest of Westeros. The first took place at the Aegonfort in 2 BC and the second at the Starry Sept of Oldtown in 1 AC.[1]

Aegon's crown in The World of Ice & Fire

After securing the mouth of the Blackwater Rush on both sides, Aegon the Conqueror commanded the lords he had defeated to come to the Aegonfort. In front of their new subjects, Aegon's sister-wives proclaimed him king; Visenya placed a crown on Aegon's head and Rhaenys hailed him as "Aegon, First of His Name, King of All Westeros and Shield of His People".[1]

A few days after the coronation, Aegon's armies marched out of the Aegonfort to continue his Conquest, whilst the other monarchs of Westeros prepared to face the Targaryens.[1]

After the Field of Fire and the submission of the North, Aegon marched south towards Oldtown. Lord Manfred Hightower of the Hightower rode outside of the city walls and personally submitted his sword and city to Aegon on the advice of the High Septon, who had received a vision from the Crone of Oldtown being burned and destroyed should they resist the Conqueror.[1]

Three days after his arrival, the High Septon anointed Aegon with the seven oils in the Starry Sept, crowned him, and proclaiming him "Aegon of House Targaryen, the First of His Name, King of the Andals, the Rhoynar, and the First Men, Lord of the Seven Kingdoms, and Protector of the Realm". This day marked the official start of Aegon's reign.[1]

Only a handful of lords had been present for Aegon's first coronation at the mouth of the Blackwater, but hundreds were on hand to witness his second, and tens of thousands cheered him afterward in the streets of Oldtown as he rode through the city on Balerion's back. Amongst those at Aegon's second coronation were the maesters and archmaesters of the Citadel. Perhaps for that reason, it was this coronation, rather than the Aegonfort crowning on the day of Aegon's landing, that became fixed as the start of Aegon's reign.[1]