Ser Aegor Rivers, frequently called Bittersteel, was one of the Great Bastards and a son of King Aegon IV Targaryen by his fifth mistress, Lady Barba Bracken.[1][4] Aegor was the founder of a famed group of exiled sellswords, the Golden Company.[2] In his personal arms, he combined the red stallion of House Bracken with black dragon wings from House Blackfyre, on a golden field.[4]

Being half-Targaryen, Aegor had purple eyes, but black hair. As an adult, he had a close-cropped beard. He looked like a warrior, being lean, light, and tall. Aegor's armor was well-made, though plain-looking, being grey-steel and black rings. On his helm was a horse head with a horse's mane flowing behind. His shield displayed his personal sigil: a stallion with black dragon wings, on a golden field, snorting fire.[4]

Aegor was angry all of his life,[4] and quickly irritated and offended.[2] He did not smile, and especially loathed his younger half-brother, Brynden Rivers, and Brynden's mother, Melissa Blackwood, who had replaced Aegor's mother Barba Bracken as King Aegon IV Targaryen's mistress.[4]

Aegor was born at King's Landing to one of King Aegon IV Targaryen's mistresses, Barba Bracken. When Queen Naerys Targaryen recovered her health, Prince Daeron and Aemon the Dragonknight forced Aegon to send Barba and child from the capital, and Aegor was instead raised at Stone Hedge in the riverlands.[1]

The angry Aegor reserved particular loathing for his half-brother Brynden Rivers, whose mother, Melissa Blackwood, had replaced his own as their father's favorite mistress. Aegor loathed Brynden, who was known as Bloodraven, even further when Shiera Seastar, their beautiful half-sister and a fellow Great Bastard, chose Brynden over him. Their other half-brother, Daemon Blackfyre, agreed to wed his daughter Calla to Aegor. Aegor often urged Daemon to press his own claim to the Iron Throne.[2]

In the First Blackfyre Rebellion in 196 AC, Aegor sided with Daemon Blackfyre against King Daeron II Targaryen. During the battle of the Redgrass Field, Aegor commanded the right of Daemon's host.[5]

To prevent a rout upon Daemon's death during the battle, Aegor rallied his troops and charged into the Raven's Teeth, the archers of Brynden Rivers. Although Aegor took out Bloodraven's eye during their duel, he ultimately fled the battlefield.[2] Carrying the Valyrian steel sword Blackfyre, Aegor fled Westeros with Daemon's widow, Rohanne of Tyrosh, and her surviving children, eventually settling in the Free City of Tyrosh.[6] 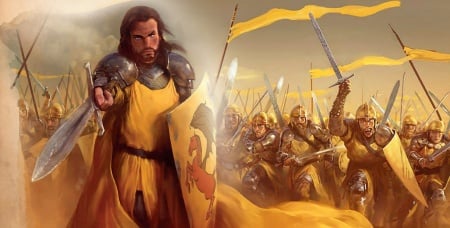 Bittersteel leading the Golden Company, as depicted by Marc Simonetti in The World of Ice & Fire.

Aegor served a year with the Second Sons before leaving to create the Golden Company, a famous mercenary organization, to stop the loss of support for the Blackfyres as other exile lords began to join other mercenary companies. While sellswords are notoriously unreliable, the Golden Company has a respectable reputation. They are said to have never broken a contract. The words of the Golden Company are "Beneath the gold, the bitter steel"[7], and refer to Aegor's nickname, Bittersteel. Shortly after its creation, the Golden Company became one of the most famous and disciplined sellsword companies known in the Free Cities. They quickly established their reputation by sacking Qohor when the city refused to honor its contract.[8]

The Golden Company was heavily involved in three of the four Blackfyre Rebellions that followed the first one. While Aegor refused to support Daemon II Blackfyre during the Second Blackfyre Rebellion in 211 AC, he supported Haegon I Blackfyre in the Third Blackfyre Rebellion in 219 AC. Aegor was captured at the end of the third rebellion, and brought to the Red Keep as a captive. While Brynden Rivers and Prince Aerion Targaryen argued that Aegor should be executed, King Aerys I Targaryen decided to send Aegor to the Wall to join the Night's Watch. The ship taking Aegor north was intercepted, however, and Aegor returned to the Golden Company. In Tyrosh, before the year was over, Aegor crowned Daemon III Blackfyre, Haegon I's eldest son.[9]

In 236 AC, Aegor landed on Massey's Hook at the head of the Golden Company with Daemon III, starting the Fourth Blackfyre Rebellion. The rebellion was crushed at the battle of Wendwater Bridge, though Aegor managed to escape.[10][11] A few years after the Wendwater Bridge, Aegor reappeared in the Disputed Lands, where he fell during a skirmish between Tyrosh and Myr.[10] On his deathbed, he commanded the men of the Golden Company to boil the flesh from his skull, dip it in gold, and carry it before them when they cross the narrow sea to retake Westeros. The captains-general who have since led the Golden Company have followed Aegor's example.[12]

During one of the various Blackfyre Rebellions, Aegor swore a blood oath with Torwyn Greyjoy, but this Lord Reaper of Pyke betrayed Aegor to his enemies.[13] 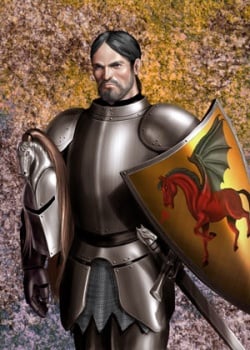 Tommard: ... beggar's feast you've laid before us. Without Bittersteel ...
Gormon: Bittersteel be buggered. No bastard can be trusted, not even him. A few victories will bring him over the water fast enough.[5]

Bitter his steel may have been, but worse was his tongue.[2]

He died defeated and alone, a broken man in an alien land.[12]

Bittersteel and Bloodraven both loved Shiera Seastar, and the Seven Kingdoms bled.[14]

When he fled, he swore he would return to place a son of Daemon's upon the Iron Throne. He never did.[15]

Bittersteel was half-dragon, and all bastard.[16]

George R. R. Martin first imagined Aegor's personal arms as a grey longsword displayed bendy sinister with a black dragon's head above and a red horse's head below, both facing out, on a white field.[4]