Aemma Arryn was the queen consort and first wife of King Viserys I Targaryen, and a granddaughter of King Jaehaerys I Targaryen and his sister-wife, Queen Alysanne Targaryen.[1]

In the television adaptation House of the Dragon, Aemma is portrayed by Sian Brooke.[3] 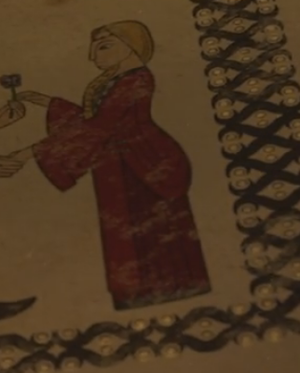 Aemma Arryn, as depicted in Game of Thrones: Histories & Lore.

Aemma was the fifth child of Lord Rodrik Arryn, and the only one by his second wife, Princess Daella Targaryen, herself the daughter of King Jaehaerys I Targaryen and his sister-wife Alysanne Targaryen. Aemma's mother died in childbed. Aemma had four elder half-siblings from her father's first marriage, including her half-sisters Elys and Amanda.[2]

Aemma married Prince Viserys Targaryen, her cousin, in 93 AC. Upon her grandfather's death, Aemma became the queen consort of Viserys, who had been chosen as heir to the throne during the Great Council in 101 AC.[1]

Aemma became pregnant multiple times in the early years of her marriage. She suffered multiple miscarriages, and gave birth to a son who eventually died in the cradle. In 97 AC, Aemma gave birth to a healthy daughter, Princess Rhaenyra. Aemma and Viserys both adored their only living child.[1]

In early 105 AC, Aemma became pregnant once more. Late in the year, she gave birth to a son, Prince Baelon Targaryen. Aemma died during the birth, and her son died a day later.[1]

Aemma's daughter Rhaenyra was chosen as heir to King Viserys I Targaryen in late 105 AC, after the deaths of both Aemma and her son Baelon, and after a fall-out between King Viserys and his brother, Prince Daemon Targaryen. Despite the fact that the lords of the realm swore their fealty to Princess Rhaenyra in 105 AC,[1] Aemma's daughter, upon Viserys's death in 129 AC, found herself in a struggle for the throne. Viserys had remarried after Aemma's death, and fathered four children with his new wife, Alicent Hightower. The eldest of those four, Prince Aegon, had been crowned king by Lord Commander Criston Cole, and Queen Alicent, in an attempt to usurp Princess Rhaenyra, who, at that point, was still unaware of her father's death.[4]

This power struggle lead to a war known as the Dance of the Dragons, which caused the deaths of both Rhaenyra and her half-brother Aegon, as well as most of Rhaenyra's children, and Aegon's siblings and sons.[5][6]

Aemma's daughter Rhaenyra had six children, one of them stillborn. The youngest two of Rhaenyra's living children, Princes Aegon and Viserys, would later become kings, Aegon III and Viserys II. It would be the line of Viserys II that continued the line of dragonkings. In addition, Aegon's daughter Daena and Viserys's son Aegon had a bastard son together, Daemon, who would create House Blackfyre.[5][7][8][9]

Aemma was the fifth child of Lord Rodrik Arryn of the Eyrie and the first by his second wife, Princess Daella Targaryen. Her older half-siblings were two unnamed brothers, and Elys and Amanda Arryn.[2] She married Prince Viserys Targaryen and had one unnamed son, one daughter, Rhaenyra, and another son, Baelon, by him.[1]