Princess Alyssa Targaryen was the fifth born child of King Jaehaerys I Targaryen and Queen Alysanne Targaryen. Alyssa was a dragonrider whose dragon was Meleys, the Red Queen.[1]

As a baby, Alyssa resembled her deceased sister Daenerys, but this resemblance faded as Alyssa aged. She became long-faced and skinny. She had dirty blond tangled hair, without a trace of silver. She had mismatched eyes, one violet, the other green. She had big ears and a lopsided smile. At the age of six she broke her nose, which healed crooked.[1]

In her character, Alyssa took after her brother Baelon. As a child, she did not act like a girl. She would dress in boy's clothes whenever possible, and preferred to ride, climb, and duel with wooden swords over more lady-like activities, and shunned the company of girls. She had a warrior's heart, according to Archmaester Gyldayn. As a child, she refused to eat porridge.[1]

Alyssa was strong, quick, and spirited. She loved to boast that she was "as bawdy a wench as any barmaid in King's Landing".[1]

Alyssa was born in late 60 AC to King Jaehaerys I and Queen Alysanne Targaryen. She was named for her grandmother, Alyssa Velaryon,[1] who had died six years before.[2]

As a young child, Alyssa followed her brother Baelon, four years her elder, everywhere every since she was able to walk, to Baelon's annoyance. Soon after her birth in 62 AC, Alyssa's sister Maegelle began to cling to Alyssa, the same way as Alyssa had to Baelon, to Alyssa's annoyance and Baelon's amusement. Alyssa avoided her younger sister as well she could.[1]

While considering a bride for Prince Aemon, Alyssa, as his eldest living sister following the death of Princess Daenerys, was considered. Queen Alysanne Targaryen firmly refused, however, claiming Alyssa was meant for Baelon. In 72 AC, Alyssa attended a tourney at Duskendale, held in honor of the wedding of Lord Darklyn to a daughter of Lord Theomore Manderly. Alyssa and Baelon finally became inseparable, and by 73 AC plans for their eventual marriage were already being made. That same year, after her brother Vaegon had severely insulted their sister Daella, Alyssa poured a flagon of wine over his head. When Baelon began training Vaegon at arms during the year that followed, Baelon once brought Alyssa to the training yard, dressed in a man's mail, hoping that having to face a woman would lead to Vaegon making more of an effort. Alyssa, recalling the incident between Vaegon and Daella, mocked Vaegon as she danced around him, humiliating him, whilst Daella watched.[1] 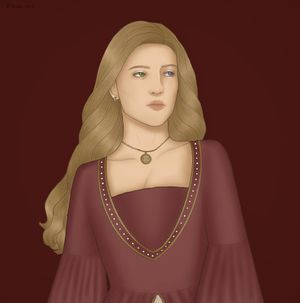 Alyssa married Baelon in 75 AC. Their bedding sparked much ribald humor in the following days, as Alyssa's "sounds of pleasure could be heard all the way to Duskendale" it was said. That same year, Alyssa claimed a dragon for her own. The Dragonkeepers persuaded her not to claim Balerion, assuring her that she would prefer a faster dragon than the old Black Dread. Eventually, Alyssa claimed Meleys, who had never been ridden before.[1]

Alyssa and Baelon spent every hour they were not flying on their dragons together, most often in their bedchamber. In 77 AC, Alyssa gave birth to her first child, a son they named Viserys. Although she was advised not to do it, Alyssa put the newborn Viserys in swaddling clothes and mounted Meleys with him when he was nine days old. In 81 AC, Alyssa gave birth to Daemon. Within a fortnight after he had been born, she took him up in the sky upon her dragon as well.[1]

In 83 AC, Alyssa was announced to be pregnant again. She gave birth the next year, to another son, Aegon. The labor was long and difficult and Alyssa never fully recovered from the childbirth. She died within a year, at the age of twenty-four. Aegon died half a year later, not yet even a year old. Alyssa's death shattered Baelon.[1]

I mounted him and took him for a ride, and I mean to do the same tonight. I love to ride.[1]

—Alyssa on her wedding night

Red maidens, the two of us, but now we've both been mounted.[1]

—Alyssa about herself and Meleys, after claiming the dragon

You were made for battles, and I was made for this. Viserys and Daemon and Aegon, that's three. As soon as I am well, let's make another. I want to give you twenty sons. An army of your own![1]

—Alyssa to Baelon, after giving birth to her third son, Aegon

Although listed as the second child and eldest daughter of King Jaehaerys I Targaryen and Alysanne Targaryen in The World of Ice & Fire,[3] published in 2014, as of Fire & Blood, published in 2018, Alyssa had become the fifth child and second daughter of King Jaehaerys I and Queen Alysanne. Fire & Blood introduced several other changes regarding Alyssa's siblings. On these changes, Elio Garcia, co-author of The World of Ice & Fire, has stated the following:

... George had some new ideas for some of the names and the stories of the children who died young, and corrected some issues that came out of his original birth order (we actually got the names of all the kids quite late in the production of TWoIaF—literally a month before we had to finalize the book—so there was not much time to interrogate it). However, the stories of those who live to adulthood, as published in TWoIaF, do remain the same (just, of course, much more detailed).[4]