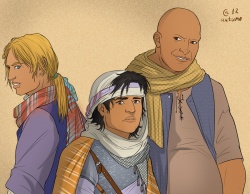 Ser Archibald Yronwood, called Arch[1] and the big man,[1] is a knight from House Yronwood and a nephew to Anders Yronwood, Lord of Yronwood.[4]

Archibald is six-and-a-half-feet tall, broad of shoulder and huge of belly. He has legs like tree trunks, hands the size of hams, and no neck. His arms are thick enough to rival even Strong Belwas.[5] Arch's bald head reminds others of a stone.[1][5]

Arch wields a spiked warhammer,[6] a dagger,[7] and fine armor.[2] He is a better fighter than Quentyn Martell or Gerris Drinkwater,[2] and older than the former.[5] He is aggressive at dicing[2] and easily becomes seasick.[1]

Archibald lost all his hair from a childhood malady.[1] He was first called the big man by his cousin, Ser Cletus Yronwood.[1]

Doran Martell, Prince of Dorne, tells his daughter, Princess Arianne Martell, that her younger brother, Prince Quentyn Martell, has been sent with a small party on a dangerous voyage.[8] 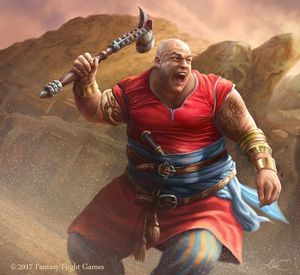 Quentyn has been sent to wed Daenerys Targaryen, now the Queen of Meereen. The prince has been joined by Ser Archibald, his cousin Ser Cletus Yronwood, Maester Kedry, Ser Gerris Drinkwater, and Ser Willam Wells.[1] Arch becomes seasick during the voyage, with Kedry treating him for four days in Lys.[1] The party's ship, Meadowlark, is ambushed by corsairs off the coast of the Disputed Lands, and Cletus, Kedry, and Willam are slain.[1]

In Volantis, the survivors are unsuccessful in hiring a ship that will transport them to Meereen. Archibald suggests taking the demon road, but his idea is dismissed in favor of Gerris's plan to join the Windblown, a sellsword company on its way to the city.[1] To hide his identity Archibald goes by the name "Greenguts", while Quentyn pretends to be his squire, "Frog". The three companions sell their fine armor in Volantis and acquire battered armor from the Windblown.[2] When Quentyn, Gerris, and Arch discuss deserting the Windblown after the siege of Astapor, they are summoned by the Tattered Prince. The captain orders them to join a party of Westerosi mercenaries who are to pretend that they betrayed the company and want to join Daenerys.[2]

The Dornishmen present themselves to Daenerys in Meereen and the prince reveals their reason to be there, but Daenerys declines Quentyn's offer for marriage since she is about to wed Hizdahr zo Loraq. The queen advises the Dornishmen to return to Dorne but they are determined to stay.[9]

Archibald and Gerris reluctantly help Quentyn in his scheme to take the dragons after Daenerys vanishes from Meereen.[7] Arch wears a bull's mask while disguised as one of the Brazen Beasts, and he uses his warhammer to break a lock deep within the Great Pyramid.[6] When Rhaegal mortally burns Quentyn with dragonflame, Archibald tries to beat the flames with his bare hands but to little success. Both Archibald and Gerris are arrested but neither gives resistance in their grief.[10]

Ser Barristan Selmy, the Hand of the Queen, visits the Dornishmen in their prison cells and tells them that they are to be hanged for treason. Gerris blames everything that has happened on Daenerys but Arch manages to calm him down. The big man tells Barristan what happened when they tried to capture the dragons and also that Quentyn promised Pentos to the Tattered Prince for the Windblown's help in the plan. The old knight sees opportunity and offers the prisoners a ship to Dorne and Quentyn's bones if they deliver a message to the Windblown's leader. Barristan wants the Dornishmen to tell the Tattered Prince that he will be given Pentos if he helps in freeing the Meereenese prisoners held by the Yunkai'i. Gerris is reluctant, but Archibald accepts and convinces his younger companion to go along this plan.[10]

I am always prepared to fight.[2]

Daenerys: Greenguts is a queer sort of name.
Archibald: A jape, Your Grace. From the ships. I was greensick the whole way from Volantis. Heaving and ... well, I shouldn't say.[5]

Gerris: Even if the queen returns, she'll still be married.


Archibald: Not if I give King Harzoo a little smack with my hammer.
Quentyn: Hizdahr. His name is Hizdahr.


Archibald: One kiss from my hammer and no one will care what his name was.[7]
—Gerris Drinkwater, Archibald, and Quentyn Martell

Archibald: Fire and water don't mix, and that's a fact. You get a good cookfire lit, blazing away nice, then it starts to piss down rain and next thing your wood is sodden and your flames are dead.


Gerris: Dragons are not made of wood, Arch.


Archibald: Some are. That old King Aegon, the randy one, he built wooden dragons to conquer us. That ended bad, though.[6]
—Archibald and Gerris Drinkwater

The sellswords loved Greenguts, who bet as fearlessly as he fought, but with far less success.[2]

The Dornishmen were knights, at least in name, though only Yronwood impressed him as having the true steel. Drinkwater had a pretty face, a glib tongue, and a fine head of hair.[10]