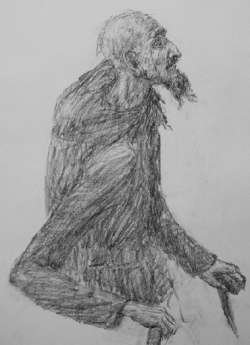 Arnolf Karstark is a member of House Karstark and the uncle of Lord Rickard Karstark.[5] He is the castellan of Karhold,[2] but the followers of Stannis Baratheon refer to him as Lord Arnolf as a courtesy.[1]

Arnolf is gaunt, crooked, and bent from age, and he walks with a blackthorn cane.[1] His left shoulder is half a foot higher then his right. Arnolf has a scrawny neck, squinty grey eyes, and is a few white hairs away from complete baldness. His teeth are yellow and his ragged, forked beard is grey and white.[7][1] Theon Greyjoy considers Arnolf, whose grey woolen cloak is bordered in sable, to be "a poor excuse for a man".[8]

Arnolf became castellan of Karhold when Lord Rickard Karstark and his sons marched south with Robb Stark during the War of the Five Kings.[9] Rickard was eventually executed at Riverrun for treason by Robb,[10] and his last surviving son, Harrion, is a captive of the Lannisters[1] at Maidenpool.[5] After Stannis Baratheon sends a declaration of his arrival at Castle Black and a demand for fealty, Arnolf is the only northerner to respond favorably to him, pledging Stannis his support.[9] Since Jon Snow, the new Lord Commander of the Night's Watch, has rejected Stannis's offer of becoming Lord of Winterfell, Stannis leans toward offering the castle to Arnolf.[6][1]

Although Theon Greyjoy does not recognize them, Arnolf and Hother Umber are seated next to Ramsay Bolton during the feast held at the Dreadfort before Ramsay marches on Moat Cailin.[7][8] Arnolf writes to Stannis that the Boltons left the strong Dreadfort with only fifty men. However, Jon convinces Stannis to recruit the northern mountain clans and liberate Deepwood Motte from the ironborn.[6]

At Barrowton, Theon learns from Ramsay and his father, Lord Roose Bolton that Arnolf is conspiring against Stannis. Roose intends for Arnolf to betray Stannis when he marches on Winterfell.[11]

Alys Karstark, the daughter of the late Lord Rickard, flees from Karhold for the protection of Jon Snow at the Wall. She reveals that Arnolf responded favorably to Stannis in hope that when the Iron Throne heard of the pledge they would execute her captive brother, Lord Harrion. Harry's death would make Alys the heir and Arnolf would then force her to marry his son, Cregan, to claim Karhold. Roose has promised Arnolf a full pardon for this service to the Lannisters.[12] Clydas sends a raven to Deepwood on Jon's behalf in hopes of informing Stannis, and the Lord Commander has Cregan imprisoned when he tries to retrieve Alys from Castle Black.[13]

Arnolf has his army meet up with Stannis at a crofters' village during the king's march on Winterfell, bringing four hundred spears, two score archers, a dozen mounted lances, and Maester Tybald[8] with a cage of ravens. Ser Justin Massey is skeptical of the claims of Arnolf and his kin that Winterfell can be taken from the Boltons.[1]

Tycho Nestoris brings Jon Snow's message from Deepwood to Stannis in time, and Tybald admits that he sent a raven with Stannis's location to Roose Bolton at Winterfell. Stannis has Arnolf, his son Arthor, and three grandsons brought before him on the pretext of breaking their fast. Upon entering the village's watchtower, Arnolf notices the chained Theon Greyjoy in the corner and realizes that Stannis is aware of his planned treachery.[8]

Stannis's knights surround the five Karstarks; two of Arnolf's grandsons attempt to resist and are badly injured, but Arnolf does not put up a fight. Stannis vows that all five will die, but whether quickly or by fire will depend on their cooperation.[8]

Justin: You will not take Winterfell!


Arnolf: Aye, we will. We'll take it for the Ned and for his daughter. Aye, and for the Young Wolf too, him who was so cruelly slaughtered. Me and mine will show the way, if need be. I've said as much to His Good Grace the king. March, I said, and before the moon can turn, we'll all be bathing in the blood of Freys and Boltons.


Justin: Your courage is admirable, Lord Karstark, but courage will not breach the walls of Winterfell.[1]
—Justin Massey and Arnolf

Homage is the duty every leal subject owes his king. Yet your father's bannermen all turn their back on me, save the Karstarks. Is Arnolf Karstark the only man of honor in the north?[9]

Arnolf is rushing to Winterfell, 'tis true, but only so he might put his dagger in your king's back. He cast his lot with Roose Bolton long ago ... for gold, the promise of a pardon, and poor Harry's head. Lord Stannis is marching to a slaughter.[12]