Ashara Dayne was a noblewoman of House Dayne and a sister of Ser Arthur Dayne, the Sword of the Morning. She committed suicide shortly after the end of Robert's Rebellion.

Ashara was a lady-in-waiting to Princess Elia Martell, the wife of Prince Rhaegar Targaryen. She had not been long at court by the false spring of 281 AC.[6] She was present at the tourney at Harrenhal that year, where she danced with a knight of the Kingsguard, Prince Oberyn Martell, and Lord Jon Connington. After Brandon Stark approached her on behalf of his younger brother Eddard, Ashara danced with Eddard as well.[1] According to Allyria Dayne, Ashara's younger sister, Ashara and Eddard Stark fell in love at Harrenhal.[7] Ser Barristan Selmy of the Kingsguard was also in love with Ashara, although he never told her so. Barristan recalls that, had he won the tourney, he would have named Ashara his queen of love and beauty.[6] According to Barristan, Ashara was "dishonored" by a man at Harrenhal.[6] In addition, Barristan states that Ashara "looked" at "Stark" following the final tilts at the tourney, although he does not identify the Stark in question.[6]

Ashara's brother Arthur died the war, fighting during the combat at the tower of joy. Eddard traveled to Starfall to return Arthur's greatsword Dawn to House Dayne.[5] Some time after his visit, Ashara jumped from the top of the Palestone Sword, one of the towers of Starfall, into the sea.[7] Several characters have cited possible reasons for Ashara's decision to commit suicide: a broken heart,[7] because of her stillborn daughter,[6] because of a stolen child,[8] for the "man who had dishonored her at Harrenhal",[6] or due to grief over Arthur's death.[7] Her body was never found.[9]

At Winterfell, Eddard Stark's soldiers spread the tale that Ashara was the mother of Eddard's bastard son Jon Snow. When Eddard's wife, Catelyn Tully, heard these stories from her maids, she confronted Eddard, who refused to confirm or deny anything regarding Jon's mother, and subsequently silenced all talk of Ashara at Winterfell. Her name was never mentioned at the castle again.[5]

Catelyn Stark recalls confronting her husband Eddard Stark years before about the whispers she had heard about Ashara being Jon Snow's mother.[5]

When Meera Reed tells Bran Stark the story of the Knight of the Laughing Tree and the tourney at Harrenhal in 281 AC, and refers to Ashara as "a maid with laughing purple eyes".[1]

Ser Barristan Selmy recalls the tourney at Harrenhal, and regrets losing the final tilt to Prince Rhaegar Targaryen, as this prevented him from crowning Ashara as the queen of love and beauty.[6] 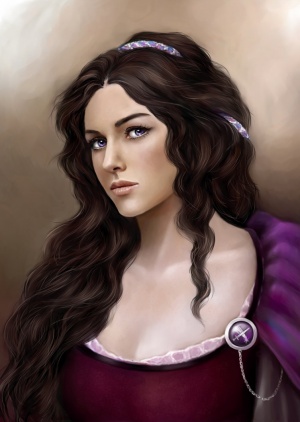 How dare you play the noble lord with me! What do you take me for? You've a bastard of your own, I've seen him. Who was the mother, I wonder? Some Dornish peasant you raped while her holdfast burned? A whore? Or was it the grieving sister, the Lady Ashara? She threw herself into the sea, I'm told. Why was that? For the brother you slew, or the child you stole?[8]

If Jon had been born of Ashara Dayne of Starfall, as some whispered, the lady was long dead; if not, Catelyn had no clue who or where his mother might be.[10]

The crannogman saw a maid with laughing purple eyes dance with a white sword, a red snake, and the lord of griffins, and lastly with the quiet wolf... but only after the wild wolf spoke to her on behalf of a brother too shy to leave his bench.[1] 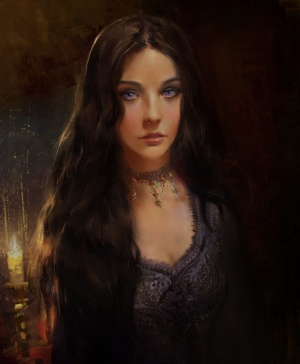 Lady Ashara Dayne. It's an old tale, that one. I heard it once at Winterfell, when I was no older than you are now. I doubt there's any truth to it. But if there is, what of it? When Ned met this Dornish lady, his brother Brandon was still alive, and it was him betrothed to Lady Catelyn, so there's no stain on your father's honor. There's nought like a tourney to make the blood run hot, so maybe some words were whispered in a tent of a night, who can say? Words or kisses, maybe more, but where's the harm in that? Spring had come, or so they thought, and neither one of them was pledged.[7]

His choice would have been a young maiden not long at court, one of Elia's companions ... though compared to Ashara Dayne, the Dornish princess was a kitchen drab.[6]

She died never knowing that Ser Barristan had loved her. How could she? He was a knight of the Kingsguard, sworn to celibacy. No good could have come from telling her his feelings. No good came from silence either. If I had unhorsed Rhaegar and crowned Ashara queen of love and beauty, might she have looked to me instead of Stark?[6]