Aurane Waters, called the Bastard of Driftmark, is a bastard member of House Velaryon.[8] He is the half-brother of Monford Velaryon, Lord of the Tides and Master of Driftmark.[7]

Aurane is handsome and lean, with silver-gold hair and grey-green eyes.[2] He has a cleft in his chin[2] and has a beard.[3] His appearance reminds Cersei Lannister of Rhaegar Targaryen, although Aurane's face is narrower,[2] and Rhaegar had deep purple eyes.[9] 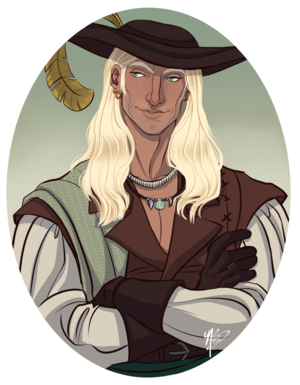 Aurane is a scion of House Velaryon and fights for Stannis Baratheon during the War of the Five Kings. After the Battle of the Blackwater, Aurane is captured and bends the knee to King Joffrey I Baratheon.[10]

Aurane is pardoned for fighting for Stannis and wins the favor of Queen Regent Cersei Lannister, who believes that Aurane desires her. Cersei grants him the position of grand admiral, formerly the master of ships, on King Tommen I Baratheon's small council. Since most of the royal fleet was destroyed at the Blackwater, Aurane receives funds to build a small fleet of dromonds.[3] Grand Maester Pycelle disagrees with Aurane's plan to captain the dromonds with younger men, rather than veterans of the Blackwater.[11]

Aurane tells Cersei that Ser Loras Tyrell was wounded during the siege of Dragonstone.[12] Cersei thinks Aurane covets Dragonstone, as the lordship he has been granted does not include a seat of his own, but she feels Rosby would be more fitting for him.[4] Because of increasing unrest in King's Landing after the arrest of Queen Margaery Tyrell, Aurane tells Queen Cersei that he will launch her new dromonds on the Blackwater Rush to keep the peace and potentially prevent Lord Mace Tyrell from rescuing his daughter, Margaery. During her imprisonment by the Faith of the Seven, Cersei is visited by Qyburn, who tells the queen that Lord Waters fled the capital with the new ships after her arrest.[13]

According to Valena Toland, a new pirate king has set up on Torturer's Deep in the Stepstones, styling himself the Lord of the Waters. He commands three-decked warships.[5] Some readers have theorized this to be Aurane Waters, with the title Lord of the Waters being a play on "Waters", the surname for noble bastards from the crownlands such as Aurane himself, and the traditional title for the head of House Velaryon, "Lord of the Tides".

Jaime: There is talk that you mean to make Aurane Waters the master of ships.


Cersei: Has someone been informing on me? Waters is well suited to the office. He has spent half his life on ships.
Jaime: Half his life? He cannot be more than twenty.
Cersei: Two-and-twenty, and what of it? Father was not even one-and-twenty when Aerys Targaryen named him Hand. It is past time Tommen had some young men about him in place of all these wrinkled greybeards. Aurane is strong and vigorous.


Jaime: Paxter Redwyne would be a better choice. He commands the largest fleet in Westeros. Aurane Waters could command a skiff, but only if you bought him one.[14]
—Jaime Lannister and Cersei Lannister