Beric Dondarrion, also known as the lightning lord because of his sigil,[10] is the Lord of Blackhaven and head of House Dondarrion. He is a marcher lord.[6] He is betrothed to Lady Allyria Dayne of Starfall. His squire is the young Edric Dayne, Lord of Starfall, Allyria's nephew.[5] In the television adaptation Game of Thrones Beric is portrayed by David Michael Scott in season 1 and by Richard Dormer in season 3 - season 8.

Lord Dondarrion rides a black courser and wears a black satin cloak decorated with stars.[12] His breastplate of dull black steel[6] displays a forked purple lightning bolt,[4] and he carries a black shield slashed by lightning.[13] Beric wields a longsword.[4]

In either 294 AC or 295 AC,[N 1] Beric was betrothed to Lady Allyria Dayne. Following their betrothal, Beric took Allyria's nephew Edric Dayne, the seven-year-old Lord of Starfall, back with him to Blackhaven to serve as his page. He later makes Edric his squire.[5]

Beric comes to King's Landing to fight in the Hand's tourney celebrating Lord Eddard Stark's appointment as Hand of the King.[12] Jeyne Poole wishes to marry him as soon as she sees him.[13] During the tournament, Beric loses a horse in a tilt with a hedge knight and is unhorsed by Thoros of Myr shortly thereafter.[13] After the conclusion of the tournament, Beric remains in King's Landing. This leads to Eddard appointing him leader of an expedition to arrest Ser Gregor Clegane, who has been raiding the riverlands after the capture of Tyrion Lannister.[14]

Beric's party is ambushed in the battle at the Mummer's Ford, however, with many killed. By the time that Robb Stark and his allies are fighting the Lannister armies near the Trident, Beric's survivors continually raid the Lannisters' foraging parties.[1][15][16] Lord Dondarrion is named among the nobles King Joffrey I Baratheon insists must do homage to him or be named traitors.[17]

Rumors have Beric as missing or perhaps dead.[1][18] Ser Burton Crakehall,[19] Ser Amory Lorch,[20] and Ser Gregor Clegane[20] all claim to have killed him. Yet, he is still raiding the Lannister foraging parties[19] and the Mountain's men are actively seeking him,[21] as are Lord Tywin Lannister's forces stationed at Harrenhal.[22]

Beric's group meets smallfolk plagued by the ravage of Lannister forces but does not trouble them, and he attempts to pay for the food they take.[22] Beric's group slays Burton's column of westermen in a trap.[19] 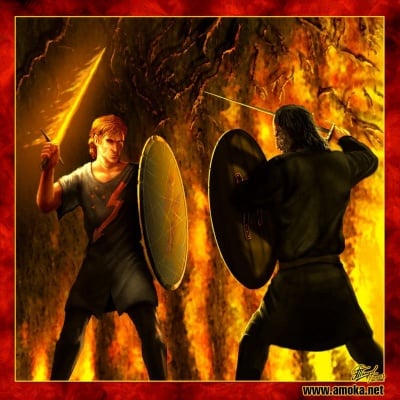 Arya Stark, Gendry, and Sandor Clegane are captured by members of the brotherhood without banners, who plan to bring them to Beric.[23][24] Meanwhile, Beric travels throughout the riverlands, including a visit to Acorn Hall.[10] Some of his men disguise themselves as the lightning lord to suggest he can be everywhere.[10]

The captives are brought to Beric within the hollow hill, where he sits on weirwood roots and is revealed as a follower of the Lord of Light. They watch as Sandor Clegane duels Beric in a trial by battle. While Thoros of Myr always lit his blades with wildfire, Beric uses his own blood to make his sword magically aflame. Despite Sandor's fear of fire, he is able to slay Beric, cleaving him from shoulder to breastbone. However, Beric is revived by Thoros, much to the surprise of the captives.[4]

It is revealed that Beric had been mortally wounded by Ser Gregor Clegane's lance at the Mummer's Ford, but his squire Edric Dayne and Green Gergen protected him and helped him to escape. Despite the efforts of Thoros, Beric died in an ash grove that night. However, Beric was unexpectedly resurrected when Thoros performed the last kiss of the Lord of Light at his funeral.[6] He became the leader of an outlaw band protecting smallfolk in the name of the late King Robert I Baratheon. Beric was killed several more times, but was repeatedly brought back to life by Thoros.[4][6]

The weary Beric has become a scarecrow of a man, his battered body bearing all the wounds of his previous deaths.[4] He is missing an eye, in its place a raw red pit. His head is broken, caved in at the temple. There is a dark ring around his throat from being hanged, and there is a terrible gash in his chest from where the Hound killed him. Arya has never seen Beric eat or sleep, though he occasionally drinks wine. Beric's memory is impaired, having forgotten details about his castle and the woman he was pledged to marry.[6] The lord still wears his ragged black cloak and dented breastplate, and a scarf around his throat to hide the marks there.[6]

Beric is aided by Edric during the battle at the burning septry against the Bloody Mummers, after which he knights Gendry.[6] Beric later visits the ghost of High Heart to hear her wisdom. Because Beric wants to ransom Arya to her family, the girl runs away from the brotherhood.[5]

Merrett Frey goes to Oldstones to ransom Petyr Frey from the brotherhood, but Tom Sevenstrings tells him that Beric is elsewhere. A woman grants approval for the outlaws to hang Merrett.[25] 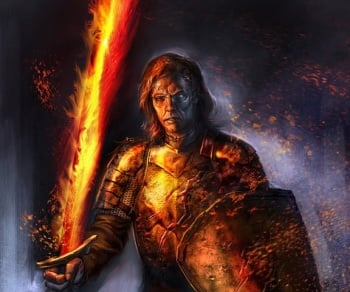 Ser Kevan Lannister informs Queen Cersei Lannister that Beric has been hanging Freys.[26] Mariya Darry, Amerei Frey, and Ser Daven Lannister believe the river lords and smallfolk are helping Beric.[11][27] In order to turn the smallfolk against the brotherhood, Lord Randyll Tarly spreads rumors that the Hound joined Beric's outlaws.[28] Ser Harwyn Plumm promises Amerei that he will kill Beric.[11] The mysterious Stoneheart is rumored to be Beric's lover.[28]

Thoros reveals to Brienne that Beric truly died when he gave his life to bring back Catelyn Stark, whose body had been found by the outlaws after the Red Wedding. Thoros refused to revive Catelyn, so Beric passed the flame of life from him to her. The brotherhood has fractured with Catelyn, now called Lady Stoneheart, as their leader, with some leaving the outlaw band.[29][30]

Ser Jaime Lannister is prepared to fight Beric and his outlaws, not realizing the lightning lord has died for the final time.[31]

The Seven Deaths of Dondarrion

According to George R. R. Martin, Beric is no longer a living being after his first death; his heart does not beat and blood does not flow through his veins. In Martin's own words, Beric is "a wight animated by fire instead of by ice".[33] 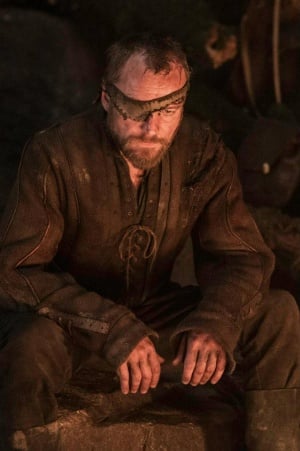 Richard Dormer as Beric in Game of Thrones

Six score of us set out to bring the king's justice to your brother. Six score brave men and true, led by a fool in a starry cloak.[4]

Even brave men blind themselves sometimes, when they are afraid to see.[6]

Can I dwell on what I scarce remember? I held a castle on the Marches once, and there was a woman I was pledged to marry, but I could not find that castle today, nor tell you the color of that woman's hair. Who knighted me, old friend? What were my favorite foods? It all fades. Sometimes I think I was born on the bloody grass in that grove of ash, with the taste of fire in my mouth and a hole in my chest. Are you my mother, Thoros?[6]

—Beric to Thoros of Myr

Beric: Gendry, do you swear before the eyes of gods and men to defend those who cannot defend themselves, to protect all women and children, to obey your captains, your liege lord, and your king, to fight bravely when needed and to such other tasks as are laid upon you, however hard or humble or dangerous they may be?


Beric: Arise Ser Gendry, knight of the hollow hill, and be welcome to our brotherhood.[6]
—Beric and Gendry

Beric: Fire consumes. It consumes, and when it is done there is nothing left. Nothing.
Thoros: Beric. Sweet friend. What are you saying?
Beric: Nothing I have not said before. Six times, Thoros? Six times is too many.[5]

—Beric and Thoros of Myr

The lightning lord is everywhere and nowhere, skinny squirrel.[10]

They say Lord Beric always gives a man a trial, that he won't kill a man unless something's proved against him.[25]

Lyle: Once we're done at Riverrun, I'll be itching for another fight. Not that Beric Dondarrion is like to give me one. I recall the man from tourneys past. A comely lad in a pretty cloak, he was. Slight and callow.
Arwood: That was before he died. Death changed him, the smallfolk say. You can kill him, but he won't stay dead. How do you fight a man like that?[11]

Don't get me started on Lord Beric. He's here, he's there, he's everywhere, but when you send men after him, he melts away like dew.[27]

Brienne: You ride with the Dondarrion. The lightning lord.
Thoros: Lightning comes and goes and then is seen no more. So too with men. Lord Beric's fire has gone out of this world, I fear. A grimmer shadow leads us in his place.[29]

—Brienne of Tarth and Thoros of Myr