From A Wiki of Ice and Fire
Jump to: navigation, search
This article is about the sword. For the family, see House Blackfyre. 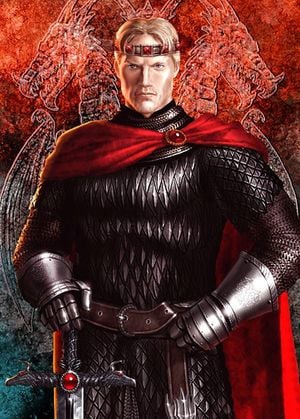 Aegon I Targaryen with Blackfyre, by Amok ©

In the aftermath of Aegon's Conquest, King Aegon I Targaryen used Blackfyre to kill Qhorin Volmark during the invasion of the Iron Islands.[3] During the First Dornish War, Aegon killed the champion of House Toland with Blackfyre, not knowing it was actually the fool of Ghost Hill.[4]

Even though Aegon the Conqueror was a great warrior with Blackfyre,[2] his sister, Queen Visenya Targaryen, feared the blade was not enough to protect the new king from danger. Aegon was convinced to allow the formation of the Kingsguard in 10 AC.[5][6]

Aegon had his elder son, Aenys Targaryen, handle Blackfyre from time to time, but the prince was no more than an adequate swordsman. Aegon bestowed knighthood on his younger son, Maegor Targaryen, during a tourney at Riverrun in 28 AC, dubbing the prince with Blackfyre.[7]

After Aegon died at Dragonstone in 37 AC, the king's body was burned in a funeral pyre with his hands folded over the hilt of Blackfyre. Prince Maegor then retrieved Blackfyre, which had been made darker in color by the flames but was otherwise unharmed.[7]

Aegon the Conqueror was succeeded by King Aenys I Targaryen, but the new king granted Blackfyre to his more martial younger brother, Prince Maegor Targaryen. Maegor henceforth only wielded Blackfyre and kept his previous Valyrian steel sword, Dark Sister, at Dragonstone. When Maegor refused to put aside his second wife, Alys Harroway, the polygamous prince chose exile in Pentos and refused Aenys' request to leave Blackfyre behind.[7]

Maegor flew to Dragonstone to claim the crown after Aenys died in 42 AC. When Grand Maester Gawen insisted that the Iron Throne should pass to Aenys's son, Prince Aegon, Maegor beheaded Gawen with Blackfyre. Maegor wielded Blackfyre during his trial of seven against the Warrior's Sons, with the new king slaying Ser Damon Morrigen and Ser Willam the Wanderer. Maegor later used Blackfyre to kill Myros when the Grand Maester spoke out against Maegor marrying Tyanna of Pentos. In Oldtown, seven prominent Warrior's Sons who refused to join the Night's Watch were beheaded by Maegor with Blackfyre. After Tyanna confessed to poisoning the children of Maegor's other queens, the king used Blackfyre to cut out her heart and feed it to his dogs.[7]

When the realm began to unite against Maegor the Cruel, Queen Rhaena Targaryen stole the sword from the sleeping Maegor at the Red Keep for Aenys's surviving son, Prince Jaehaerys, who had announced his own claim at Storm's End. Maegor was eventually found dead on the Iron Throne.[7]

King Jaehaerys I Targaryen bore Blackfyre on his swordbelt.[8] Jaehaerys used the sword to personally slay the rebel Borys Baratheon during the Third Dornish War.[9] Jaehaerys also killed Ser Braxton Beesbury in a trial by combat after Stinger had seduced the king's daughter, Princess Saera.[9][10]

Aegon II Targaryen's possession of Blackfyre enhanced his legitimacy against his rival, Rhaenyra Targaryen, during the Dance of the Dragons.[11]

When Aegon returned to King's Landing near the end of the Targaryen civil war, he allowed the condemned Trystane Truefyre to be granted knighthood before his death. Ser Marston Waters dubbed the youth Ser Trystane Fyre, and Ser Alfred Broome then beheaded the newly-made knight with Blackfyre.[12]

Daeron I Targaryen wielded Blackfyre during his conquest of Dorne, and he was eventually killed by Dornishmen with the sword in hand.[13]

While it is unknown when Blackfyre was returned to the possession of the Targaryens, it had been returned at least by the reign of King Aegon IV Targaryen. However, as, according to Ser Eustace Osgrey, Blackfyre had been wielded by every Targaryen king since Aegon's Conquest,[14] the sword might have already been returned during the reigns of Baelor I Targaryen or Viserys II Targaryen. 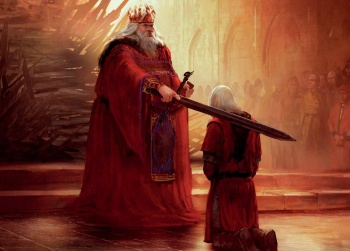 King Aegon IV knights Daemon Waters with Blackfyre.
As depicted by Marc Simonetti in The World of Ice & Fire.

In 182 AC, King Aegon IV Targaryen chose to bestow Blackfyre on his bastard son Daemon, a born warrior, instead of his scholarly legitimate son, the future Daeron II Targaryen. Ser Daemon, who had been known by the bastard surname Waters until then, took the name "Blackfyre" thereafter, creating House Blackfyre.[15] Some felt that the Conqueror's sword symbolized the monarchy, so the gift was one of the seeds from which rebellion grew.[16][17]

Daemon I Blackfyre wielded the sword during the First Blackfyre Rebellion in 196 AC, and he fought an epic duel with Ser Gwayne Corbray of the Kingsguard at the Redgrass Field, pitted against Gwayne's own Valyrian blade, Lady Forlorn. Aemon Blackfyre briefly wielded the sword after the Raven's Teeth slew Daemon, but Aemon was also killed in the battle.[14] Daemon's half brother, Aegor Rivers, known as Bittersteel, attempted to rally the rebels with Blackfyre in hand, but Bittersteel withdrew after dueling another half brother, Brynden Rivers, a rival called Bloodraven.[16]

With Daemon and his twin sons dead at the Redgrass Field, Bittersteel took Blackfyre with him in exile to the Free Cities, where he eventually founded the sellsword Golden Company. Aegor refused to give the Valyrian sword to Daemon II Blackfyre for the ill-fated Second Blackfyre Rebellion, and Lord Ambrose Butterwell doubted Daemon's potential after learning he lacked Blackfyre.[18]

Possession of Blackfyre after Bittersteel is unknown, although maesters consider the Blackfyre Pretenders to have ended with the death of Maelys Blackfyre,[19]

Blackfyre from the Valyrian Steel ® Collection

You are more fit to bear this blade than me. Wield it in my service, and I shall be content.[7]

—Aenys I Targaryen to Maegor Targaryen

Even sheathed, the blade could be mistaken for no other.[8]

Eustace: Because Daemon was the better man. The old king saw it, too. He gave the sword to Daemon. Blackfyre, the sword of Aegon the Conqueror, the blade that every Targaryen king had wielded since the Conquest ... he put that sword in Daemon's hand the day he knighted him, a boy of twelve.


Egg: My father says that was because Daemon was a swordsman, and Daeron never was. Why give a horse to a man who cannot ride? The sword was not the kingdom, he says.


Eustace: Your father is a fool.[14]
—Eustace Osgrey and Egg