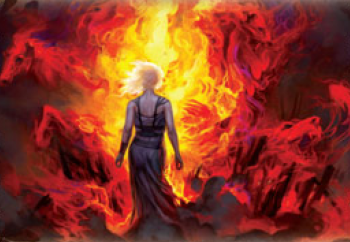 Bloodmagic[1][2] or blood sorcery[3] is a type of magic rooted in blood, considered the darkest and most powerful sorcery.[2] Practitioners of bloodmagic are known as bloodmages, as well as maegi.

According to legend, Azor Ahai succeeded in forging Lightbringer by working on it for a hundred days and a hundred nights and tempering the steel by plunging the blade into the heart of his beloved wife, Nissa Nissa.[4]

The magic practiced by the Valyrians was rooted in blood and fire magic. Septon Barth, in his Dragons, Wyrms, and Wyverns: Their Unnatural History, speculated that the bloodmages of the Freehold employed wyvern stock to create dragons.[5] Meanwhile, in the flesh pits of Gogossos, bloodmages mated beasts to slave women to bring forth twisted half-human children.[3]

Bloodmagic, along with necromancy and divination, is rumored to be practiced in Qohor.[6] According to Maester Pol, the spells required to rework Valyrian steel involve blood sacrifice.[6]

According to Old Nan, Harren Hoare, King of the Isles and the Rivers, included human blood in the mortar of Harrenhal,[7] which is now said to be cursed.[8] Danelle Lothston, the mad Lady of Harrenhal, is said to have bathed in blood,[9] held feasts of flesh,[9] and practiced dark arts during the reign of King Maekar I Targaryen.[10] According to tales of smallfolk, giant bats from Harrenhal would bring bad children to her.[11]

Samwell Tarly tells Jon Snow that warlocks from Qarth bathed him in aurochs blood in an attempt to make him brave.[7]

Mirri Maz Duur tells Daenerys Targaryen that she knows spells capable of saving a man from death, but warns her that only death may pay for life and death may be cleaner. Mirri sacrifices Drogo's stallion and,[1] unbeknownst to Daenerys, her son Rhaego to save the live of the dying Khal Drogo. The spell, however, only restores Drogo's body, leaving him in a catatonic state.[12]

Daenerys has a funeral pyre built and a horse killed. Mirri believes she will try to resurrect him through bloodmagic and insists that without the spells the blood is nothing. She even offers assistance in exchange for release. Daenerys has the horse, Drogo's body, her three dragon eggs and Mirri Maz Duur placed in the pyre. After the pyre is lighted and Mirri dies, Daenerys walks into the inferno. After the fire dies, not only is Daenerys found alive, with just her clothes and hair burned, but also the eggs have hatched and the first three dragons in more than a hundred years have been born.[13]

Melisandre pleads to Stannis Baratheon to give her Edric Storm, bastard son of the late King Robert I Baratheon, as there is power in king's blood and he can be sacrificed to "wake the stone dragon." Stannis refuses, but she is able to leech some of Edric's blood. Stannis casts the leeches into the flames while stating the names of the "three false kings" Balon Greyjoy, Robb Stark, and Joffrey Baratheon.[14] In time, Balon falls from Pyke,[15] Robb is killed at the Red Wedding,[16] and Joffrey is poisoned at his own wedding feast.[17]

Queen Regent Cersei Lannister recalls that during her youth, she, Jeyne Farman, and Melara Hetherspoon visited Maggy the Frog outside Lannisport. Although Jeyne fled in terror, Maggy tasted the blood of Cersei and Melara and told the girls their futures.[18][19][2]

Yna, a one-eyed prostitute, is reputed for telling the future by tasting a drop of blood.[20]

When Stannis's army sails for the Wall, Melisandre sacrifices Lord Alester Florent to R'hllor to gain favorable winds for the voyage north.[21]

This is bloodmagic, lady. Only death may pay for life.[1]

Bloodmagic is the darkest kind of sorcery. Some say it is the most powerful as well.[2]

What feeds a dragon's fire? All Valyrian sorcery was rooted in blood or fire.[22]