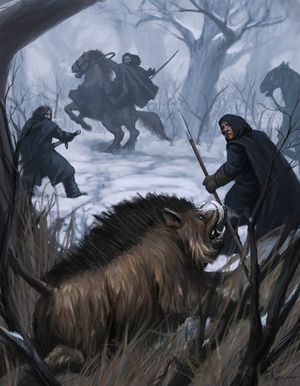 The Night's Watch and a boar, by BrittMartin © Green Ronin Publishing

The boar of the known world is similar to a real life wild boar. Boars of truly monstrous size may exist in some locations.[1][2]

Boars are common in the forested areas of Westeros, including the kingswood,[3] the wolfswood,[4] and Wat's Wood.[5] Boars live beyond the Wall in the haunted forest,[6] and, according to Othell Yarwyck, the woods north of Stonedoor have an abundance of wild boar.[7]

In Essos, boars can be found in the dark forests surrounding Norvos,[8] and the Forest of Qohor is said to have boars of monstrous size.[2] Big black boars have also been seen on the Isle of Cedars.[9] 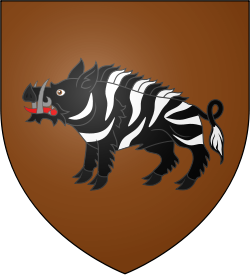 The sigil of House Crakehall depicts a brindled black and white boar.

The sigil of House Vikary depicts a red boar's head.

The boar appears on the sigils of both Houses Crakehall and Vikary.[10] Ser Lyle Crakehall is known as Strongboar.[11]

Boar hunting is a common activity among the male nobility of Westeros. It is not considered to be a sport for ladies, who generally hawk instead.[12] A hunting party usually includes men to flush the boar from its lair, dogs to gather the prey, and men on horses equipped with boarspears to kill the animal.[12] Hunted boar may be served at a feast, roasted, often with its head displayed and an apple in its mouth.[4][3][13][14]

Boar baiting is a pastime in Westeros.[15]

Skinchangers can inhabit the body of boars.[16]

Crake the Boarkiller is a legendary figure from the Age of Heroes that founded House Crakehall.[17]

In 58 AC, Lord Alaric Stark went hunting elk and wild boar in the wolfswood with his guest, Queen Alysanne Targaryen.[18]

During the Dance of the Dragons, Trystane Truefyre attempted to appeal to smallfolk by granting them the right to hunt rabbits, hares, and deer in the kingswood, but he forbade them from hunting elk or boar in the royal forest.[19]

Boar is served during the feast of the wedding tourney at Whitewalls.[20]

Barristan Selmy was knighted at the age of sixteen by King Aegon V Targaryen after participating in a tourney at King's Landing. During the feast following the tournament, Barristan ate boar prepared with dragon peppers.[21]

King Robert I Baratheon is a great hunter of boar, reportedly having killed a thousand of them.[3]

During his stay at Winterfell, King Robert I Baratheon wants to have wild boar for a feast. He goes in the wolfswood to hunt with people from his retinue, as well as people from Winterfell.[4]

King Robert hunts in the kingswood, chasing a white hart. Disappointed to find that wolves have killed his prey before him, Robert later hears talk of a monstrous boar living deeper in the forest.[22] Set on the idea of killing the animal himself, Robert commands everyone to not intervene, but he is intoxicated due to being served strongwine by his squire, Lancel Lannister, and is mortally gored in the process.[3] On his deathbed, Robert asks his friend, Lord Eddard Stark, to serve the boar during his funeral feast.[3]

After Robert's death, one rumor spreading in King's Landing says that he had been killed by a boar while hunting, while another story says that he had died eating a boar, stuffing himself so full that he ruptured.[23]

When the new king, Joffrey I Baratheon, is serving justice, one case he hears is that of a singer accused of ridiculing the late king Robert. The song is about Robert fighting a pig, and while some verses appear to be talking about the boar that killed him, others sound as if the pig is supposed to be Queen Cersei Lannister. Joffrey decides that the singer may keep either his fingers or his tongue.[24]

In King's Landing, Cersei confesses to her brother Tyrion how she had made certain Robert's squire Lancel gave him strongwine while hunting the boar, leading to his death.[13]

During the harvest feast at Winterfell hosted by Prince Bran Stark, he sends a dish with peppered boar to the boisterous Umbers.[25]

While pretending to be the servant Nan at Harrenhal, Arya Stark brings food to Lord Roose Bolton, including boar.[26]

Roast boar is served at the wedding feast of Lord Petyr Baelish and Lady Lysa Arryn at the Fingers.[27] 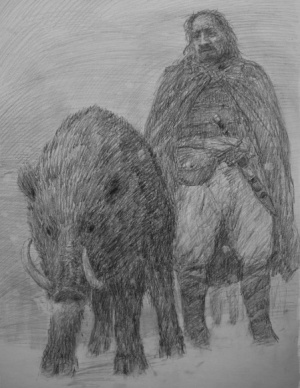 Borroq with his boar, by Marc Fishman ©

During the reopening of the fighting pits of Meereen, Barsena Blackhair fights a boar, with a dagger as her only weapon. Despite her quickness and skill, the boar manages to rip her open. Moments later Drogon descends into Daznak's Pit, kills the boar, and begins to devour both corpses.[29]

Some of the Brazen Beasts wear boar masks in Mereen.[29]

Borroq, a skinchanger of the free folk, can inhabit the body of a boar[16] as large as a bull with tusks as long as swords.[7] Because his boar does not get along with Ghost, the direwolf of Jon Snow, Borroq takes up residence in an ancient tomb near Castle Black's lichyard, where the boar roots amongst the graves.[7]

Izembaro's troupe of mummers performs The Bloody Hand at the Gate for an envoy from Westeros (Ser Harys Swyft). In the play, Big Brusco plays the role of a demonic boar which kills a fat king.[30]

Serve the boar at my funeral feast. Apple in its mouth, skin seared crisp. Eat the bastard. Don't care if you choke on him. Promise me, Ned.[3]

When Lancel saw that Robert was going after boar, he gave him strongwine. His favorite sour red, but fortified, three times as potent as he was used to. The great stinking fool loved it. He could have stopped swilling it down anytime he cared to, but no, he drained one skin and told Lancel to fetch another. The boar did the rest. You should have been at the feast, Tyrion. There has never been a boar so delicious. They cooked it with mushrooms and apples, and it tasted like triumph.[13]