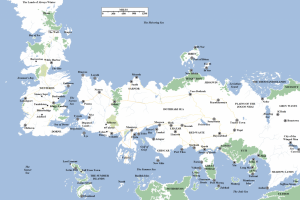 The Bone Mountains, commonly called the Bones, are a colossal mountain range in central Essos.[1] The tallest mountains in the known world,[2] they are a natural land barrier between the western part of Essos known to Westerosi and the exotic, mysterious Further East of the continent.[3]

The Bone Mountains stretch longitudinally across five hundred leagues,[2] beginning east of Qarth in the south by the Summer Sea. The southernmost Bones are called the Dry Bones because of their lack of water.[2] The Bones north of the Steel Road are known by the Dothraki as the Krazaaj Zasqa.[4] This section extends north through the Realm of the Jhogwin to the Shivering Sea.[1] The Bones cross one hundred leagues from east to west.[2]

The Dothraki sea and the red waste lie to the west of the Bone Mountains while the Great Sand Sea, the plains of the Jogos Nhai, and Yi Ti lie to the east.[1]

While there are hundreds of visible and hidden paths through the Bones, there are only three routes large enough for armies. The Steel Road, the most northerly route, cuts between the Krazaaj Zasqa to Kayakayanaya, then skirts around the top of the Great Sand Sea and south to Trader Town. The Stone Road is the middle route from Vaes Jini to Samyriana. The Sand Road, the southerly route, begins at Qarth, heads north through the red waste, and cuts through the Dry Bones to Bayasabhad and Tiqui. The old Silk Road once reached Yinishar.[2] Merchants cross the Bones to trade at Vaes Dothrak.[5]

The mountains are named after the multitude of bones left behind by creatures attempting to traverse the range.[2]

The ancestors of the Dothraki crossed the Bone Mountains, eventually settling in what is now the Dothraki sea.[2]

The Realm of the Jhogwin in the northern Krazaaj Zasqa contained the giant Jhogwin a thousand years ago,[2] while the Patrimony of Hyrkoon once flourished east of the mountain range.[5] The Dothraki conquered much of western Essos in the Century of Blood, but were halted by the Bones and the fortress cities of Kayakayanaya, Samyriana, and Bayasabhad when they attempted to expand east.[5] The Jogos Nhai desire to conquer Kayakayanaya and expand into the grasslands west of the Bones.[6]

When he reached the Bone Mountains, Lomas Longstrider believed he had reached the ends of the earth.[2]

The bones of men, the bones of horses, the bones of giants and camels and oxen, of every sort of beast and bird and monster, all can be found amongst these savage peaks.[2]

A thousand roads lead into the Bones, but only three lead out.[2]