Ser Bonifer Hasty, also known as Bonifer the Good,[3][4][5] is an old landed knight from House Hasty, and is the commander of the Holy Hundred.

Bonifer is tall, thin, and known for his piety. Ser Jaime Lannister thinks Bonifer is a withered, solemn stork of a man, with a stern, sad face. Bonifer is prone to salting his speech with appeals to the Seven.[6]

In his youth, Ser Bonifer Hasty was a promising tourney knight.[6] He and Princess Rhaella Targaryen were infatuated with one another prior to the princess's official betrothal to her brother, Prince Aerys.[2] According to Ser Barristan Selmy, Bonifer once wore the princess's favor in a tourney in which he defeated all challengers to name Rhaella his queen of love and beauty.[7] Their love was ultimately a brief thing and could never have been otherwise, as Bonifer was of far too low birth to be considered as a suitor for a princess of the royal House Targaryen. When Rhaella married Aerys, the knight found solace in religion, finding only the Maiden could replace Rhaella in his heart.[7]

Not many today know of Bonifer's brief relationship with the late Queen Rhaella in their youths; Jaime Lannister only knows that something had happened to Bonifer, a defeat or a disgrace or a near brush with death, and that he stopped jousting afterwards, deciding it was an empty vanity.[6] At one point Bonifer served under Lord Owen Merryweather, a former Hand of the King to Aerys II Targaryen. Bonifer founded the Holy Hundred, a group of one hundred pious men-at-arms.[6]

Bonifer joins King Renly Baratheon at the beginning of the War of the Five Kings.[8] Upon Renly's death at Storm's End, he joins King Stannis Baratheon. Bonifer takes part in the Battle of the Blackwater, where he loses fourteen of his Holy Hundred.[6] He then submits to King Joffrey I Baratheon.[3][5]

Bonifer and the Holy Hundred accompany Ser Jaime Lannister to take Riverrun. On the way, they stop at Harrenhal, where Jaime announces that Bonifer will hold Harrenhal in the crown's name during the absence of Petyr Baelish, Lord of Harrenhal.[6]

Jaime considers it probable that Orton Merryweather had convinced Queen Regent Cersei Lannister to choose Bonifer as castellan of Harrenhal, as Bonifer had once served Orton's grandsire, Lord Owen Merryweather. Jaime also notes Bonifer hails from the stormlands and has neither any enemies to feud with nor any allies to reward along the Trident, and he and his Holy Hundred have an excellent reputation for justice, sobriety, and discipline.[6]

Jaime takes his supper in Harrenhal's Hunter's Hall with Bonifer. He thinks of Bonifer in jest as "Baelor Butthole", in a mocking reference to the pious King Baelor the Blessed. Bonifer tells Jaime he will not suffer Pia or Gregor Clegane's men remaining at Harrenhal. Jaime obliges and takes Pia and the Mountain's men with him when he leaves.[6]

During her wedding procession in Meereen, on her way to marry Hizdahr zo Loraq, Ser Barristan Selmy takes Daenerys Targaryen's mind off things by telling her a bit about her mother, Rhaella. Barristan says Rhaella was once briefly smitten with a young landed knight from the stormlands. He tells her the knight put away his lance the day her mother wed her father, Aerys II Targaryen, and become very pious. The knight's passion for Rhaella had no hope of fulfillment. Barristan chooses his words carefully and does not mention the name of the knight to Daenerys, and she does not ask for the identity of the knight who had fallen so deeply in love with her mother.[7]

Jaime: Can you hold Harrenhal with just your Holy Hundred?
Bonifer: I anticipate no difficulty. The Crone will light our way, and the Warrior will give strength to our arms.[6]

Jaime: This castle has an ill repute, and one that's well deserved. It's said that Harren and his sons still walk the halls by night, afire. Those who look upon them burst into flame.


Bonifer: I fear no shade, ser. It is written in The Seven-Pointed Star that spirits, wights, and revenants cannot harm a pious man, so long as he is armored in his faith.


Jaime: Then armor yourself in faith, by all means, but wear a suit of mail and plate as well.[6]
—Jaime Lannister and Bonifer 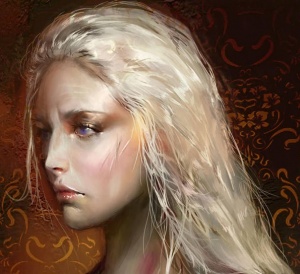 Ser Bonifer himself had been a promising knight in his youth, but something had happened to him, a defeat or a disgrace or a near brush with death, and afterward he had decided that jousting was an empty vanity and put away his lance for good and all.[6]

His passion was impossible of course. A landed knight is no fit consort for a princess of royal blood.[7]