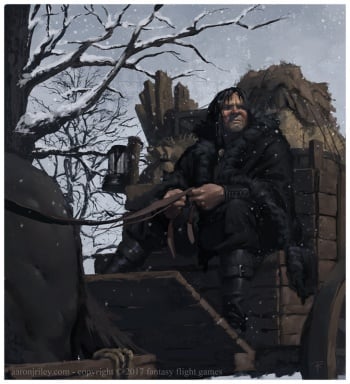 Bowen Marsh, also known as the Old Pomegranate, is the Lord Steward of the Night's Watch.[3] In the television adaptation Game of Thrones he is portrayed by Michael Condron.

Bowen is round and red as a pomegranate.[3] He has a mind for counts and measures.[5]

As Lord Commander Jeor Mormont is known as the "Old Bear", Edd Tollett refers to Bowen as the "Old Pomegranate".[6] Although he is a northman, Bowen worships the Faith of the Seven.[7]

Bowen is one of the guests at the dinner organized by Jeor Mormont, Lord Commander of the Night's Watch, on the eve of Tyrion Lannister's departure.[3] He accompanies Jon Snow and Samwell Tarly, who have been assigned as stewards, when they pronounce their vows in the weirwood circle in the haunted forest beyond the Wall.[8]

Bowen is assigned as castellan of Castle Black by Lord Commander Mormont while the great ranging takes place. He sends letters to King's Landing requesting assistance for the Night's Watch.[9]

After Jeor Mormont's death at Craster's Keep, Bowen temporarily takes command of the Night's Watch until the election of a new Lord Commander. Appointing the ancient Ser Wynton Stout to command in his absence, Bowen leaves Castle Black to face a diversion by the wildlings who lead him to the Bridge of Skulls.[2] There, Bowen confronts the Weeper and inflicts upon him a bloody defeat costing heavy losses to the Night's Watch. Injured, Bowen is healed at the Shadow Tower and brought back to Castle Black by Ser Denys Mallister. On the way there, they meet and join with Samwell Tarly and Gilly.[10]

Bowen supports Janos Slynt after his own defeat in the election of the new Lord Commander, attempting to sway his sworn brothers and King Stannis Baratheon of Janos's worth.[10] However, Jon Snow is chosen instead.[11]

Bowen returns to his duties as Lord Steward.[12]

Bowen is at first helpful to Jon, but becomes increasing angry with his decisions. These include making a baseborn lad, Satin, the Lord Commander's new steward,[13] appointing the wildling Leathers as the new master-at-arms at Castle Black,[13] and allowing wildlings to join the Watch and diminish the food supply.[14][5]

Supported by most stewards and builders of the Watch,[15] Bowen suggests sealing the gate through the Wall at Castle Black, but his advice is rejected by Jon.[14] He tries to discourage the Lord Commander from leading some recruits to recite their vows in the haunted forest, suggesting Castle Black's sept instead.[16]

Jon tasks Bowen with collecting tolls from wildlings passing through the Wall and sending the riches to Eastwatch-by-the-Sea.[5][17]

The final straw for Bowen is when Jon reads aloud a letter sent by Ramsay Bolton and states his intention to march on House Bolton at Winterfell, threatening the neutrality of the Night's Watch. A crying Bowen and fellow conspirators stab Jon several times in the mutiny at Castle Black.[18]

We need to conserve what strength remains us. Every death diminishes us, and we are stretched so thin ... Take the high ground and win the battle, my uncle used to say. No ground is higher than the Wall, Lord Commander.[14]

The lord commander must pardon my bluntness, but I have no softer way to say this. What you propose is nothing less than treason. For eight thousand years the men of the Night's Watch have stood upon the Wall and fought these wildlings. Now you mean to let them pass, to shelter them in our castles, to feed them and clothe them and teach them how to fight. Lord Snow, must I remind you? You swore an oath.[5]

—Bowen during the mutiny at Castle Black

Bowen knows a deal more about counting swords than he's ever known about using them.[19]

He's the man you want in front when the foes are in the field. He'll count them right up for you. A regular demon for counting, that one.[6]

Samwell: W-what if there was someone else? Could you s-support someone else?
Cotter: Who? Bowen Marsh? The man counts spoons.[10]