From A Wiki of Ice and Fire
Jump to: navigation, search
For other uses, see Brandon Stark (disambiguation).

Brandon Stark was the oldest son of Lord Rickard Stark and Lady Lyarra Stark and the heir to Winterfell prior to Robert's Rebellion. His younger siblings were Eddard, Lyanna, and Benjen.

Brandon was in appearance and character very different from Eddard.[5] He had grey eyes,[6] and was tall and handsome.[5][4] Brandon was absolutely not shy about taking what he wanted.[7] He was rather hot-blooded,[8][5] a trait their father, Lord Rickard, described as originating from "the wolf blood". Brandon shared this trait with his sister, Lyanna, and Eddard believes this led them both to early deaths.[8] Brandon was the best swordsman among his siblings, and an excellent jouster.[4][9] He loved to hone his sword, preferring it to be as sharp as possible.[7] He also loved to ride, and has been described by Barbrey Dustin as a centaur in that regard.[7]

Born in 262 AC[3] at Winterfell,[4] Brandon was the eldest son and heir of Lord Rickard and Lady Lyarra Stark.[10] Brandon was fostered at Barrowton with Lord Dustin, father of Willam Dustin. He spent most his time riding in the Rills. He took the maidenhead of Barbrey Ryswell, who was infatuated with him.[7] He was eventually betrothed to Catelyn Tully of Riverrun,[7][11] who considered him to be more handsome than his younger brother Eddard.[5] To Barbrey, Brandon swore he did not want to marry Catelyn, but Lord Rickard's ambitions did not allow him to marry the daughter of a northern bannermen.[7]

In 281 AC, Brandon was present at the tourney at Harrenhal in 281 AC. There, he was introduced to the crannogman Howland Reed by his sister, Lyanna. During the opening feast of the tourney, Brandon asked Ashara Dayne to dance with Eddard, who was too shy to ask her himself.[1] Brandon later entered the lists, but was unhorsed by Prince Rhaegar Targaryen.[12][1] After Prince Rhaegar won the tournament, he crowned Brandon's sister Lyanna as his queen of love and beauty, passing over his own wife, Princess Elia Martell.[12][13] Brandon had to be restrained from confronting Rhaegar, as he took Rhaegar's action as a slight upon Lyanna's honor, since Lyanna had been betrothed to Lord Robert Baratheon for a long time.[13]

In 282 AC,[14] Brandon was present at Riverrun when the date for his wedding to Catelyn was announced.[15] Petyr Baelish, the ward of Catelyn's father, Lord Hoster Tully, challenged Brandon to a duel for her hand.[16] They fought in the lower bailey at Riverrun. Catelyn begged him to spare Petyr's life, and Brandon promised her to do so. Brandon armored himself for battle, aided by Catelyn's young brother, Edmure Tully, who served as Brandon's squire. When Brandon saw that Petyr wore only a helm and a breastplate, and mail, he took off most of his own armor. Brandon was more than a match for the much younger Petyr. He offered the boy several chances to yield, but when Petyr kept refusing, Brandon ended the duel by injuring Petyr severely.[6] Afterwards he departed Riverrun, promising Catelyn to return soon so they could wed.[17] 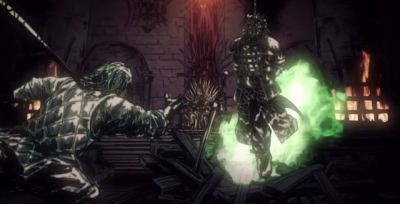 Deaths of Brandon and Rickard Stark

From Riverrun, Brandon left to join his father's wedding party, coming down from the north.[18] They were on their way again back to Riverrun for the wedding when word reached Brandon of Lyanna's supposed abduction by Prince Rhaegar Targaryen.[19] Brandon, along with his squire Ethan Glover, Kyle Royce, Elbert Arryn, and Jeffory Mallister, rode to King's Landing immediately.[19] Upon entering the Red Keep, Brandon shouted for Rhaegar to "come out and die". Rhaegar was not present, however, and Brandon and his companions were arrested by King Aerys II Targaryen and charged with plotting Rhaegar's murder. Their fathers were called to court to answer the charges.[19][20] Brandon was placed in a strangle device from Tyrosh, with a longsword placed just out of reach. He was forced to watch as his father was burned alive in his own armor and strangled himself while attempting to get to the sword so he could save his father. He was twenty years old at the time.[21][19]

Brandon was buried in the crypts beneath Winterfell. Though only the kings and lords of Winterfell normally have statues in their likeness placed beside their tombs, both Brandon and his sister Lyanna were given a statue by their brother Eddard, as he had loved them very much.[22] 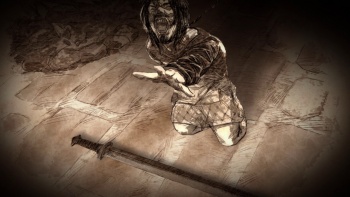 Theon Greyjoy has a nightmare involving a feast of the dead at Winterfell. Many of the dead men and women attending are people that Theon knew personally or were slain by his own hand and/or command. Yet he also notices faces that he had never known in life. Among them is Brandon, standing with his father and sister.[23]

When Bran, Rickon, Osha, Hodor and the Reeds escape the crypts after the Sack of Winterfell, Bran takes with him the sword of Brandon's statue, from the crypts. As he does so, he notes the relevance of using the steel of his namesake.[24]

When Catelyn Stark visits his cell, Ser Jaime Lannister tells her the tale of Brandon's death, when he notices she does not know the details. Catelyn calls the story so hideous, that it must be true.[19]

Reek and Lady Barbrey Dustin enter the crypts of Winterfell, and shortly discuss Brandon. Reek notices that Brandon's sword is missing, prompting Dustin to state that Brandon would not be happy.[7]

A bloody sword is a beautiful thing.[7]

Brandon. Yes. Brandon would know what to do. He always did. It was all meant for Brandon. You, Winterfell, everything. He was born to be a King's Hand and father to queens. I never asked for this cup to pass to me.[11]

—Hoster Tully, upon learning of Brandon's plans to ride south

Brandon was different from his brother, wasn't he? He had blood in his veins instead of cold water. More like me.[19]

Brandon was never shy about taking what he wanted. I am old now, a dried-up thing, too long a widow, but I still remember the look of my maiden’s blood on his cock the night he claimed me. I think Brandon liked the sight as well. A bloody sword is a beautiful thing, yes. It hurt, but it was a sweet pain.[7]