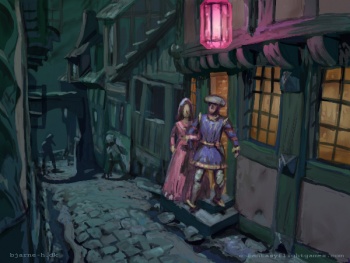 Chataya's brothel, or Chataya's for short,[1] is an upscale brothel on the Street of Silk in King's Landing. It is owned and run by Chataya.[2] Her girls are costly and dress in flowing silks cinched at the waist with beaded belts.[2]

The brothel is two stories tall with a stone ground floor and a timber upper floor. Many of its windows are leaded. Over the door swings an ornate lamp of gilded metal and scarlet glass.[2]

Inside the entrance the air smells of exotic spice. Its floor displays a mosaic of two women entwined in love. The common room is behind an ornate Myrish screen that has been carved with flowers, fancies, and dreaming maidens. The common room has a cushioned alcove and a leaded colored glass window where sunlight pours through. An older man plays the pipes.[2]

Inside the turret room's empty wardrobe is a back panel concealing a secret passageway. When the back panel is pushed aside it reveals a metal ladder whose rungs go well below street level. The shaft then opens onto a dark, slanting earthen tunnel. Having come perhaps a distance of three blocks under the Hill of Rhaenys, a patron will then emerge through a trap door at the back of a nearby stable.[2]

The secret tunnel from the brothel was dug for an unspecified Hand of the King.[2]

The brothel is a favorite of King Robert I Baratheon.[2] Lords Stannis Baratheon and Jon Arryn visited Chataya's brothel when trying to identify bastards fathered by Robert.[3]

One of the whores has Barra, a bastard daughter of King Robert I Baratheon.[4] During his search for the king's bastards, Lord Eddard Stark finds the child and her mother at Chataya's brothel.[4]

Queen Cersei Lannister decides to erase any clue of her adultery and has Barra and her mother killed by men of the City Watch under the command of Allar Deem.[5]

Tyrion Lannister visits Chataya's as a front for his clandestine visitations with Shae at a manse nearby. When he enters the common room, he sees an older man playing music on pipes and girls playing tiles near a window. Alayaya, Chataya's daughter, shows Tyrion how to access the secret tunnel from the turret room, and Varys escorts him beneath Rhaenys's Hill. Tyrion then rides from the nearby stable to discretely visit Shae's manse.[2]

Tyrion returns to the brothel on several occasions so he can visit Shae; each time he only requests the services of Alayaya. During one visit, a patron attempts to spit on Tyrion but the spittle instead lands on Tyrion's companion, Bronn, who knocks out the patron's teeth.[6] On another occasion, Bronn goes off with a girl from Dorne. The War of the Five Kings has led Chataya to offer a poorer vintage of wine.[6] Tyrion considers bringing King Joffrey I Baratheon to the brothel so he can enjoy the girls.[7] Marei teaches her fellow prostitutes how to read,[6] and she wagers with Dancy over the latter girl's ability to seduce Tyrion.[6]

Fearing that Tyrion is plotting against Joffrey, Cersei threatens Tyrion by having Alayaya taken as a hostage. The queen mistakenly believes that the prostitute is Tyrion's lover instead of Shae.[8]

Tyrion sends Podrick Payne to find Ser Bronn, who is with Alayaya and Marei at Chataya's.[9]

Anguy reveals he spent the small fortune he had won at the Hand's tourney on Alayaya, Dancy, and Jayde, as well as on roast swan and Arbor wine.[10]

Chataya runs a choice establishment. I've half a mind to buy it. Brothels are a much sounder investment than ships, I've found. Whores seldom sink, and when they are boarded by pirates, why, the pirates pay good coin like everyone else.[4]

Little men have big appetites, and I'm told the girls here are fit for a king.[2]

Tyrion: Show me a few of your girls.
Chataya: It will be my great delight. You will find that they are all as sweet as they are beautiful, and skilled in every art of love.[2]

Tyrion: How is it a brothel happens to have a secret entrance?
Varys: The tunnel was dug for another King's Hand, whose honor would not allow him to enter such a house openly. Chataya has closely guarded the knowledge of its existence.[2]

It's good to be a knight. No more looking for the cheaper brothels down the street. Now it's Alayaya and Marei in the same featherbed, with Ser Bronn in the middle.[9]

Chataya's on the Street of Silk has several girls who might suit your needs.[11]