Coldhands is a mysterious figure from beyond the Wall. "Coldhands" is a name given to him by Samwell Tarly; his actual name is unknown.[2]

Coldhands is dressed in the mottled blacks and greys[3] of the Night's Watch with a black wool scarf concealing his pale face.[2] He is armored in boiled leather and ringmail,[2] and he wields a sword.[1] His ungloved hands are black and cold as ice, and he rides a great elk.[3] A flock of ravens flies under his command[3] and brings him information.[2] Thin and gaunt, he speaks with a rattling voice and does not breathe.[2]

Summer does not like the way Coldhands smells.[2] Though Coldhands is often described as dead, his eyes are described as black,[2] in contrast to the light blue of wights' eyes.[4][1] 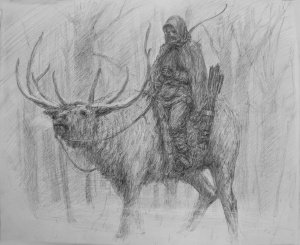 Coldhands saves Samwell Tarly, Gilly, and her son when they are beset by wights at Whitetree, lost in the haunted forest after fleeing Craster's Keep, addressing Sam as "Brother!"[3] He takes the two under his protection and brings them to the Black Gate of the Nightfort located underneath the Wall. Coldhands cannot pass through himself, due to the Wall's magic, but he charges Sam and Gilly with bringing Bran Stark and his companions to the Black Gate.[4] Sam continues on to Castle Black, entrusted to secrecy by Coldhands.[5]

Coldhands guides Bran, Hodor, and Meera and Jojen Reed to the last greenseer north of the Wall. Along the way he departs to deal with "foes" behind them, sending his charges on to a lakeside village. Bran, having slipped into his direwolf, Summer, as a warg, discovers Coldhands and his ravens had killed five men of the Night's Watch.[2] Unknown to Bran is that they were the surviving traitors responsible for the mutiny at Craster's Keep, such as Ollo Lophand.[2] When Bran wakes, Meera tells him that Coldhands has arrived with a sow, which the girl roasts. Bran and his friends discover that Coldhands is indeed dead, but he continues to refuse to show his face.[2]

When his great elk collapses along their journey, Coldhands whispers a blessing in an unknown language and slits the animal's throat; he and Meera butcher the carcass for food.[1]

Coldhands leads Bran and his companions to the cave of the three-eyed crow, his flock of ravens dwindling during the journey.[1] Coldhands cannot enter the cave, but he fights off wights as Bran and his friends climb to the cave entrance.[1] 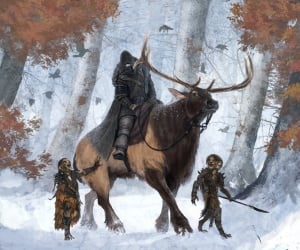 The world believes the boy is dead ... Let his bones lie undisturbed. We want no seekers coming after us. Swear it, Samwell of the Night's Watch. Swear it for the life you owe me.[5]

Bran: What happened to the men? The foes behind us?


Coldhands: They will not trouble you.
Bran: Who were they? Wildlings?
Coldhands: They were foes.
Bran: You killed them. You and the ravens. Their faces were all torn, and their eyes were gone. They were your brothers. I saw. The wolves had ripped their clothes up, but I could still tell. Their cloaks were black. Like your hands. Who are you? Why are your hands black?


Coldhands: Once the heart has ceased to beat, a man's blood runs down into his extremities, where it thickens and congeals ... His hands and feet swell up and turn as black as pudding. The rest of him becomes as white as milk.[2]
—Bran Stark and Coldhands

Jojen: This ... Coldhands?
Gilly: That wasn't his true name. We only called him that, Sam and me. His hands were cold as ice, but he saved us from the dead men, him and his ravens, and he brought us here on his elk.[4]

The direwolf did not like the way that Coldhands smelled. Dead meat, dry blood, a faint whiff of rot. And cold. Cold over all.[2]

I don't like him. And I don't trust him. Those hands of his are bad enough. He hides his face, and will not speak a name. Who is he? What is he? Anyone can put on a black cloak. Anyone, or any thing. He does not eat, he never drinks, he does not seem to feel the cold.[2]


Leaf: No. They killed him long ago.[1]
—Bran Stark and Leaf